Joe Biden is busy trying to reassure some Pennsylvanians he might be fine with fracking but it’s not his call. When it is, he’s a big NO.

Joe Biden was against fracking. Then, he told Pennsylvanians it was all a misunderstanding; he favored fracking. Then, after the usual suspects grumbled, he added a “right now” qualifier” to his denial of a plan for a fracking ban. So, how does one tell where the real Joe Biden—assuming there is one—stands? Well, it turns out there is a way. And, that test tells us a lot; namely that Joe Biden would force into two million barrels more in oil imports and $500 billion of entanglements with the worst sort of nations.

First, let’s talk about the test. It revolves around the fact Pennsylvania doesn’t need Joe Biden to help fracking decisions. It’s a matter of state law, not Federal, and both Democrat and Republican governors as well as legislators have aligned in favor of fracking since it became a big win for the Commonwealth as it rose to become the second biggest natural gas producer in the nation. Therefore, Joe Biden can take whatever position he wishes on fracking in Pennsylvania or change it every hour. It will remain irrelevant; nothing but cheap political talk.

Where it matters and where Joe Biden reveals his real preference (or that of his controllers), is on the Federal level, where the President controls what happens on huge swaths of America that are owned by the U.S. government, can by Executive Order, turn the spigot off. This is what the Joe Biden campaign said last October (emphasis added):

“On day one, Biden will use the full authority of the executive branch to make progress and significantly reduce emissions. Biden recognizes we must go further, faster and more aggressively than ever before, by… [p]rotecting America’s natural treasures by permanently protecting the Arctic National Wildlife Refuge and other areas impacted by President Trump’s attack on federal lands and waters, establishing national parks and monuments that reflect America’s natural heritage, banning new oil and gas permitting on public lands and waters, modifying royalties to account for climate costs, and establishing targeted programs to enhance reforestation and develop renewables on federal lands and waters with the goal of doubling offshore wind by 2030.”

That’s pretty clear and there’s no wiggle room; Joe Biden would ban any new oil and gas development on public land or water. That means fracking, as virtually all oil and gas wells are hydraulically fractured today. So, the Biden position where he actually has any authority to do anything about it, is a huge “NO” to not only fracking but any permitting for oil and gas. It matters, too, because Federal lands accounted for 22% and 12%, respectively, of total oil and gas production in the nation in 2019. That’s not chump change.

Indeed, it’s hugely important and Joe Biden has told us it doesn’t matter; he’s more interested in being seen as green, but an API analysis titled “The Consequences of a Leasing and Development Ban on Federal Lands and Waters” that was released earlier this month tells us the following regarding the ban Joe Biden both wants to make and actually has the authority to do so:

Think about that last point, in particular. Do we really want to throw a half trillion dollars at the likes of Vladimir Putin and his company of ex-KGB types? Would we want to captive to OPEC again? Have we learned nothing about energy security after nearly a lifetime chasing it? Well, if you answered “NO” then you need to consider Joe Biden’s big “NO ” to fracking because that’s what it means. Here, in fact, is how we see it, as tonight’s debate rapidly approaches: 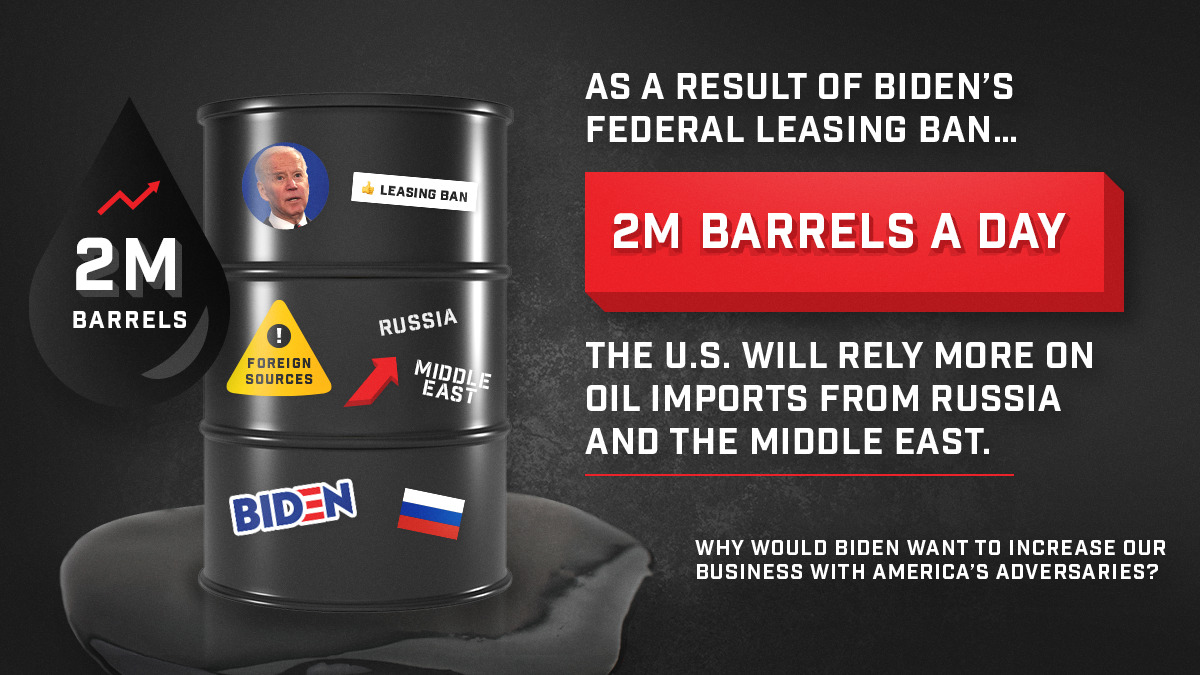 This is the stuff coming off Joe Biden’s teleprompter that matters, not his meandering, ever-changing position on fracking in the Keystone State where he’s key to no decision. Focus, instead, on the danger from what he can do.

3 thoughts on “Joe Biden Says Yes to Fracking When It’s Not His Call; Otherwise It’s A No”