Joe Biden, while denying it, has proposed a Green New Deal that would be nothing less than disastrous for Americans and others.

Some 90% of all US wells are now hydraulically fractured. Fracked wells in shale formations open up vast supplies of oil, natural gas and petroleum liquids that previously were locked up and inaccessible. Fracking conventional wells expands and prolongs production, leaving less energy in the ground.

Joe Biden, Kamala Harris, AOC, the Democrat Party and US environmentalists are determined to make climate change, the Green New Deal, and replacing fossil fuels with wind, solar, battery and biofuel power the centerpiece of their foreign and domestic policies. They would ban fracking outright – or price and restrict it out of existence through a slow, painful death of a thousand regulatory cuts.

That would cost millions of jobs and billions of dollars in annual royalty and tax revenues, send energy prices soaring, and end America’s newfound status as the world’s foremost oil and gas producer.

It would also hammer environmental quality, especially in sunny and windy locations, such as Western, Midwestern and coastal states. Their fossil fuel revenues would disappear; their wind and sunshine would be exploited; their open spaces, scenic areas and wildlife habitats would be blanketed with wind turbines, solar panels, transmission lines, and warehouses filled with backup power batteries. 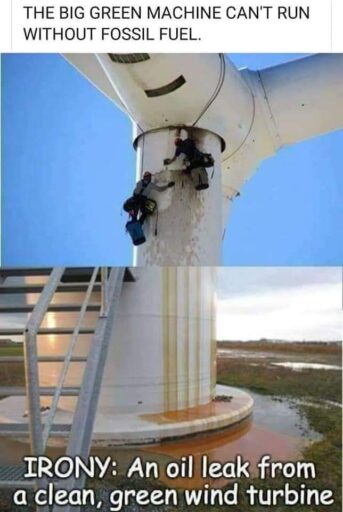 But some would benefit greatly – including those with financial and other interests in mining, mineral processing and manufacturing related to wind, solar and battery technologies. Hunter Biden’s email trove and growing cascades of other evidence continue to reveal fascinating Biden Family connections to China, Russia and Ukraine: countries that would profit mightily from a US Green New Deal, because they supply most of the metals, minerals and components that are absolutely essential under any GND vision.

Many news media, social media and search engines routinely spike, censor or bury stories that could harm the Biden candidacy, sow doubt about manmade climate chaos, or undermine claims that the GND transition would be easy, affordable, ecological, sustainable and painless. It would not be.

Wind and sunshine are certainly clean and renewable. Harnessing them to power America is not, something Biden and friends don’t want to acknowledge.

Fossil fuels still provide 80% of US energy. In 2018, they generated 2.7 billion megawatt-hours of electricity. Another 2.7 billion MWh worth of natural gas powered factories, emergency power systems, and furnaces, ovens, stoves and hot water heaters in restaurants and homes. Cars, trucks, buses, semi-trailers, tractors, bulldozers and other vehicles consumed the equivalent of another 2 billion MWh.

That’s 7.4 billion megawatt-hours per year that the GND would have to replace! We’d also have to generate another 142 million MWh per year to charge batteries for each week of windless, cloudy days.

The more we try to do so, the more we’d have to put turbines and panels in low quality wind and solar sites, where they’d generate electricity only 15-20% of the year: 80-85% below “nameplate capacity.”

Even if the United States and world could somehow mine, process and smelt enough metals and minerals – and manufacture, transport and install all those turbines, panels, batteries and transmission lines – the GND would require the greatest expansion of mining, manufacturing and land use in human history.

With Democrats and Greens still adamantly opposed to mining anywhere in the USA – even though the USA likely has all those metals and minerals literally beneath our feet – America would be dependent on China, Russia and Ukraine for the critical materials that make wind turbines, solar panels and rechargeable batteries possible. US foreign and domestic policies would be held hostage.

Nearly all this mining, processing and manufacturing would require gasoline, diesel, natural gas and coal … in foreign countries … because those operations cannot be conducted with wind, solar and battery power. Global CO2 and other emissions would increase. Global atmospheric carbon dioxide levels would continue to rise. They would simply come from locations outside the USA.

Moreover, that overseas mining, processing and manufacturing would mostly take place under nearly nonexistent workplace safety, fair wage and child labor laws. The horrors we already see Africa’s Congo region would be minor compared to what would accompany GND demands for cobalt and other materials.

Replacing oil and gas for petrochemicals, pharmaceuticals and plastics would require importing those feed stocks or planting millions of acres in canola, soybean and other biofuel crops. The water, fertilizer, pesticide, tractor, harvester, processing and transportation requirements would be astronomical.

The wind, solar, battery and biofuel facilities would impact hundreds of millions of acres of America’s croplands, scenic areas, and plant and animal habitats. Raptors, other birds, bats, and forest, grassland and desert wildlife would suffer substantial losses and even be driven into extinction in many areas.

Would they require that wind and solar companies go through an extensive, multi-year NEPA environmental review process for every industrial installation and transmission line? Demand compliance with the Endangered Species Act, Bald and Golden Eagle Protection Act, Migratory Bird Treaty Act, Clean Water Act and other laws that have been strictly enforced for decades for other industrial facilities?

Or will they claim all those turbines, panels, batteries and power lines are needed to “save the planet from imminent climate cataclysms,” and thus must be exempted from wildlife and environmental laws? Will they claim killing birds, bats and other wildlife is “inadvertent” and “unintentional,” and thus should be excused or legalized – exempting even the massive slaughter associated with GND-scale installations?

Families, factories, hospitals, schools and businesses accustomed to paying 7-11¢ per kilowatt-hour for electricity would pay 22¢ per kWh as they already do in “green” US states – or even 35¢ a kWh as families now pay in Germany. Gasoline and natural gas prices would also skyrocket, until the GND banished those fuels. How many businesses would survive? How many jobs would disappear? How many people would have to join the ranks of those who must choose between heating and eating?

When electricity supplies cannot meet demand, or when California-style rolling blackouts hit, who would get cut off first? Politicians who imposed the GND and Deep State bureaucrats who operate it? Big Tech servers? Environmentalist groups and schools whose teacher unions backed the Biden-Harris-AOC Deal? Or innocent hospitals, factories, workers and families? Who would get to make those decisions?

If states or counties are forced to erect wind turbines, solar panels and transmission lines, can they decide to meet their own needs during shortages, before exporting electricity to progressive states and cities? Could they declare themselves fossil fuel sanctuaries and refuse to close mines and power plants?

Who will design and enforce the GND income confiscation and redistribution schemes, in the name of “social, environmental and economic justice” – with much of the redistribution likely going to ruling elites and their corporate and activist allies? Do we really want to further enrich the originators of COVID?

All these issues demand open, robust debate – which too many schools and universities, news and social media outlets, corporate and political leaders, and Antifa mobs continue to censor and cancel. America deserves answers, before November 3, and before any actions are taken on any Green New Deal.