Pennsylvania Senator “Absent” Andy Dinniman is a caricature of the classic politician who pompously talks about the people’s interests. But, is that who he’s really representing when he’s out there on the hustings pontificating against the Mariner East pipeline projects? One wonders. 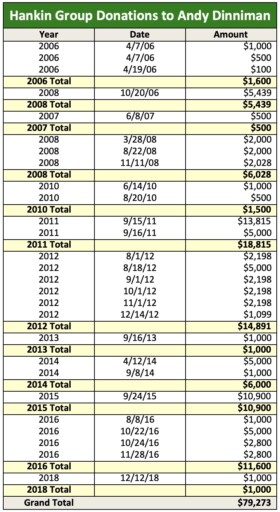 There’s a very strange pattern of donations to Dinniman campaigns, all of which can be examined by accessing the Pennsylvania Department of State Campaign Finance Online Reporting site. What’s strange is It appears Absent Andy Dinniman has a very special relationship with a commercial/residential developer by the name of the Hankin Group, which operates in his district.

The Hankin Group, in fact, in February of this year, filed a lawsuit against Sunoco, the Mariner East owner, asking a judge to force Sunoco off four of its properties where the pipeline was being constructed. This lawsuit, coincidentally or not so coincidentally, came right after Absent Andy Dinniman announced Sunoco’s temporary easements related to the construction would be expiring at several sites throughout Chester County.

Hankin Group was the second highest contributor to Andy Dinniman’s between 2014 and 2018, donating $29,500 to the ongoing campaign. Just two months before the lawsuit was announced, the Hankin Group provided Dinniman with an additional $1,000. The Hankin Group, in fact, has donated nearly $80,000 to Dinniman’s career as a state senator.

A review of donations from the Hankin Group and Dinniman’s activism raises additional questions about the timing of some events. For instance, two months after Andy Dinniman was named to the Pennsylvania Pipeline Infrastructure Task Force, Hankin Group donated $10,900 to Friends of Andy Dinniman, its second-largest single donation to the elected official.

Dinniman first advocated for tighter pipeline regulations on September 9, 2011, using social media. In a tweet, Absent Amdy noted “It’s time to tighten natural gas pipeline regulations,” linking to an editorial in the Pocono Record. A mere six days later, the Hankin Group donated $13,815 to the Friends of Andy Dinniman, according to the public records.

Dinniman also joined environmental leaders, on August 10, 2012, to raise questions about a natural gas pipeline across the east branch of the Brandywine Creek in downtown Downington, Pensylvania. Absent Andy proclaimed the conversation must address “the public-health, environmental and quality-of-life issues” about the pipeline. Two months before, he had supported extending the public comment period for the pipeline. Between August and December 2012, the Hankin Group donated $9,891 to the Friends of Andy Dinniman.

Andy cheered the delay of the pipeline in June, 2013, questioning “Is there a way to coordinate these projects in a way that minimizes their impact on Chester County, its residents and its natural resources, instead of simply reacting every time another new pipeline company wants to cross the Brandywine Creek?”

Why is this important? Because, just a year later, the Hankin Group bought 240 acres in Downington. A few years later the Hankin Group announced the company had plans to revitalize downtown Downington by building 442 apartments, retail space, and even adding a pedestrian bridge connecting Downingtown’s Johnsontown Park with the east bank of the Brandywine Creek, which was the exact location of the proposed pipeline.

It appears the Hankin Group helped secure some of this property, including the site of the former Sonoco Paper Mill plant, with Senate Bill 962, which helped ensure blighted properties are secured. Dinniman proposed this legislation.

So, what do we have here?

Is there something rotten in Dinniman land? These are simply the facts. You be the judge. Perhaps Absent Andy will reappear to explain.

7 thoughts on “Is There Something Rotten In Dinniman Country?”