There will be less gas available this winter for New England if things get tough. 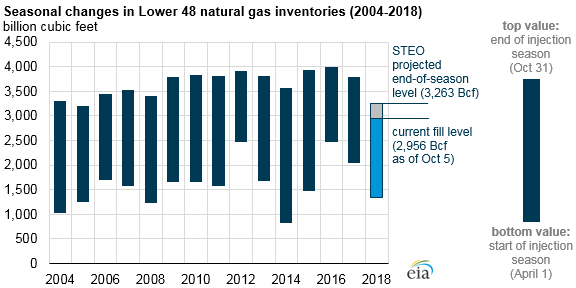 Lingering cold temperatures in April 2018, the coldest April in the past 21 years, delayed the start of the natural gas storage refill season by about four weeks. Coupled with heavy natural gas withdrawals in January 2018, the delayed start to the refill season led to storage levels that have remained lower than the previous five-year minimum.

Will we see Russian gas coming into Boston Harbor again? Elitist political correctness on fracking has it its price.

You may not have heard about it but Southwestern Energy (SWN) did a great thing a few weeks ago. Check out this report:

“It’s probably at least $100,000 or $150,000 of free work that we’re getting from this well company. We are overwhelmed. We’re overwhelmed, overjoyed!” Michelle Dunham, New Albany borough council president said.

The next time you hear some nonsense from fractivists about how natural gas development has somehow ruined rural Pennsylvania, just think about this. Better yet, ask yourself how many times you can remember those fractivists showing up to help in a similar way. You don’t remember any such cases? Well, that should tell us all something, shouldn’t it?

I wrote about Pennsylvania Senator Andy Dinniman a few weeks ago, pointing out how he was effectively using taxpayer money to harass the Mariner East 2 pipeline developers. Now the guy has gone full frontal fractivist, though, and justly earned a new moniker as “Absent Andy.” Here’s some of what he’s been putting out to any local newspaper around the Commonwealth that’s desperate for free copy:

There is an ongoing and organized effort in Harrisburg to marginalize and villainize any organizations who raise safety concerns or opposition to the growing network of natural gas pipelines crisscrossing Pennsylvania.

A recent Senate Environmental Resources and Energy Committee on natural gas development in Pennsylvania included testimony exclusively from shale gas supporters. They attempted to paint criticism or opposition to pipeline safety and the natural gas industry as hurting America and helping Chinese and Russian interests.

This hearing was about as one-sided as they come. I simply cannot sit by as industry insiders try to imply that my constituents’ very real and very serious concerns regarding pipeline environmental and public safety are being driven by Russia or China.

Organizations such as the Clean Air Council, Delaware Riverkeepers, PennEnvironment and the Sierra Club that were criticized protect and preserve our environment and do not deserve such baseless attacks…

Senate Bill 652, that was recently passed by the Senate, imposes harsh, felony-level punishments for pipeline protests. Yes, our critical infrastructure needs to be safe and secure, but this isn’t the way to do it. Now, we want to throw people in jail for up to a year for peaceful protests or “trespassing” on an easement that may be in their own backyard?

Somer readers will recall that I testified at the hearing the Senator references and when he refers to “baseless attacks” on the “Delaware Riverkeepers” (sic) it’s me he’s talking about me, although I hasten to add “baseless attacks” is his game, not mine. His attacks are 100% baseless, in fact, because he is a member of the Senate Environmental Resources and Energy Committee and didn’t show up to question me or the others who testified. If only he had sat by or at least sat down with his fellow committee members he could have spoken up. I would have been delighted to talk to him, but he chose absence.

This is why he shall, henceforth, forever be known on these pages as Senator “Absent Andy” Dinniman. He didn’t have the commitment, interest or guts to attend himself. He had a chance to defend his fractivist allies before the public and chose to vote “Absent” and hold his fire until he was safely behind the front and could fire in the air. 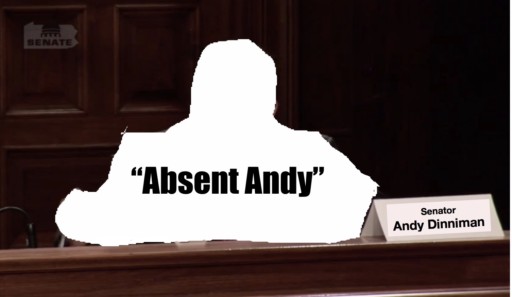 Meanwhile, “Absent Andy” also chose to oppose; a bipartisan piece of legislation (Senate Bill 652) that says nothing about stopping peaceful protests, but does say this:

A person commits an offense if the person…enters or attempts to enter property containing a critical infrastructure facility, knowing that the person is not licensed or does not have the permission of the owner or lawful occupant of the property to do so [or] enters property containing a critical infrastructure facility with the intent to willfully damage, destroy, vandalize, deface, tamper with equipment or impede or inhibit operations of the facility.

What kind of guy chooses to criticize, behind their back, those willing to testify before him and be questioned by him in public? What kind of guy refuses to support anti-vandalism legislation on the grounds it would somehow would restrict peaceful protest when it does nothing of the sort? A follower, not a leader. “Absent Andy” Dinniman is a sellout. He’s chosen to use some legitimate constituent concerns he might have employed to move things forward as a launching pad for a demagogic campaign. He’s gone full frontal fractivist.