Green New Deal physics, that is to say, the physics required to implement the foolish ideas of juvenile green energy utopians, simply do not exist.

Two months ago I covered an article and some Congressional testimony given by Mark Mills, a Faculty Fellow at the McCormick School of Engineering at Northwestern University. He’s also a Senior Fellow with the Manhattan Institute and has now written another piece in City Journal that adds to his observations on the impossible science of Green New Deal physics. It’s worth your time to read the whole thing but below I have excerpted the key facts as I see them (emphasis added). You can also watch the video that precedes them.

Spending $1 million on wind or solar hardware in order to capture nature’s diffuse wind and sunlight will yield about 50 million kilowatt-hours of electricity over a 30-year period. Meantime, the same money spent on a shale well yields enough natural gas over 30 years to produce 300 million kilowatt-hours. That difference is anchored in the far higher, physics-based energy density of hydrocarbons. Subsidies can’t change that fact.

And then batteries are needed, and widely promoted, as the way to convert wind or solar into useable on-demand power. While the physical chemistry of batteries is indeed nearly magical in storing tiny quantities of energy, it doesn’t scale up efficiently. When it comes to storing energy at country scales, or for cargo ships, cars and aircraft, engineers start with a simple fact: the maximum potential energy contained in hydrocarbon molecules is about 1,500 percent greater, pound for pound, than the maximum theoretical lithium chemistries. That’s why the cost to store a unit of energy in a battery is 200 times more than storing the same amount of energy as natural gas. And why, today, it would take $60 million worth of Tesla batteries—weighing five times as much as the entire aircraft—to hold the same energy as is held in a transatlantic plane’s onboard fuel tanks.

For a practical example of the physics-anchored gap between aspiration and reality, consider Florida Power & Light’s (FPL) recently announced plan to replace an old gas-fired power station with the world’s biggest battery project—promised to be four times bigger than the current number one, a system Tesla installed, to much fanfare, last year in South Australia. The monster FPL battery “farm” will be able to store just two minutes of Florida’s electricity needs. That’s not going to change the world, or even Florida.

Moreover, it takes the energy equivalent of about 100 barrels of oil to manufacture a battery that can store the energy equal to one oil barrel. That means that batteries fabricated in China (most already are) by its predominantly coal-powered grid result in more carbon-dioxide emissions than those batteries, coupled with wind/solar, can eliminate. It’s true that wind turbines, solar cells, and batteries will get better, but so, too, will drilling rigs and combustion engines. The idea that “old” hydrocarbon technologies are about to be displaced wholesale by a digital-like, clean-tech energy revolution is a fantasy.

If we want a disruption to the energy status quo, we will need new, foundational discoveries in the sciences. As Bill Gates has put it, the challenge calls for scientific “miracles.” Any hoped-for technological breakthroughs won’t emerge from subsidizing yesterday’s technologies, including wind and solar. The Internet didn’t emerge from subsidizing the dial-up phone, or the transistor from subsidizing vacuum tubes, or the automobile from subsidizing railroads. If policymakers were serious about the pursuit of the next energy revolution, they’d be talking a lot more about reinvigorating support for basic science.

This is the reality of Green New Deal physics. It is a fraud and the battery part is the biggest part of that fraud. There is no possibility with today’s technology to create the batteries that would be needed to eliminate the need for dispatchable natural gas energy as the baseload or backup unless one wants to go with coal and nuclear instead. These are the choices and, among them, natural gas is the most economical and acceptable. Those are the simple facts of science Green New Deal physics cannot change. We’re essentially being asked to accept this absurdity: 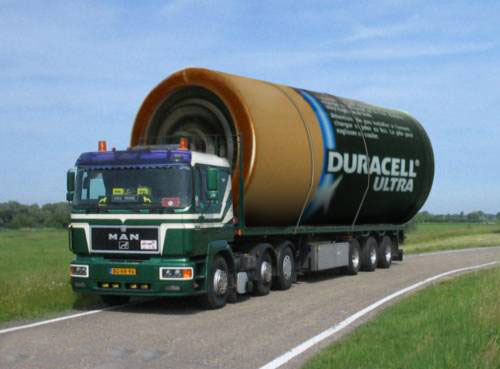