I have tried, repeatedly, as someone who has worked on both solar and wind projects, to point out these “green energy” solutions are anything but welcomed in communities where Governor Corruptocrat proposes to put them. He imagines he can get away with not only depriving the Southern Tier of economic life-saving natural gas development, but also then sticking these and other Upstaters with monster wind turbines and solar farms almost no one really wants. What’s going on in places such as Guilford, New York illustrates just how fantastical (not fantastic) the Cuomo energy policy really is. 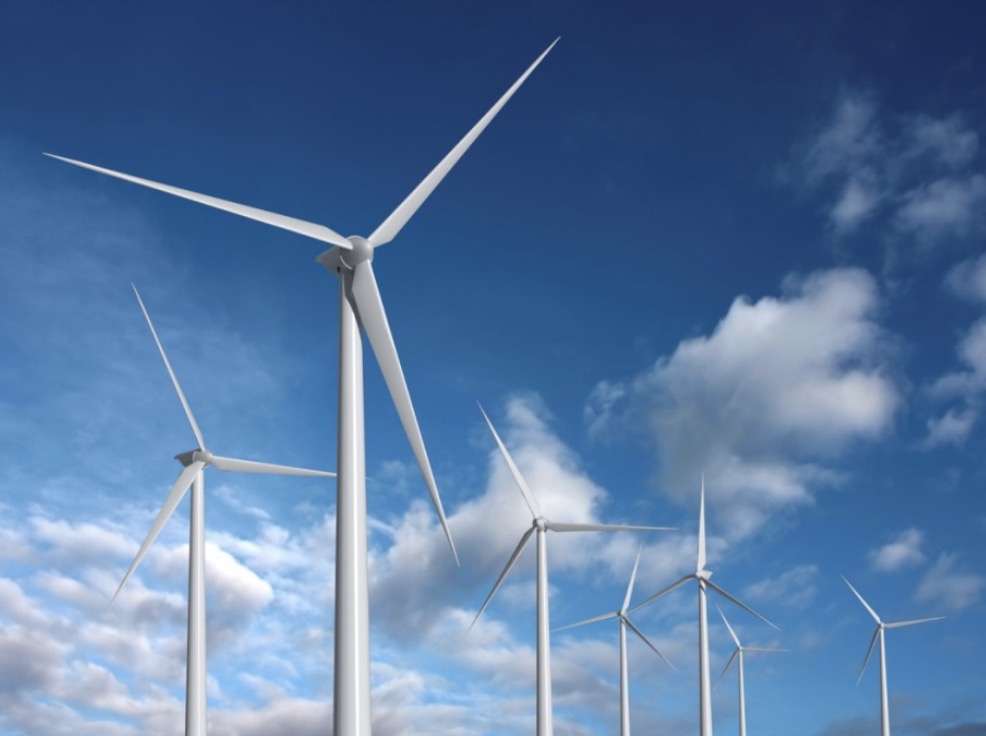 Pretty picture until you realize these are 65-story high structures that will go a ridge and there will be 30 of them!

What brought the crowd to this meeting was a plan by Calpine Corp.’s to build a 100-megawatt, 30-turbine industrial wind power installation within this town of 3,000 people about eight miles northwest of Sidney. A 100-megawatt project supplies enough electricity to power about 36,000 homes…

New York has more then 20 large-scale solar and wind projects across the state under some form of regulatory review. The run to build renewable power installations has been fueled by Gov. Andrew Cuomo’s goal to have 70% of the state’s electric demand — about 32,000 megawatts at the summer peak — generated by carbon-neutral sources by 2030. The New York State Energy Research & Development Authority provides financial incentives to sponsor, but the amounts to specific projects are not disclosed by the state, citing proprietary corporate information as reason for exemption from release…

On Wednesday night, a large contingent of residents expressed concern about the visual impact from the projected 650-foot high turbines, and the possible shadow effects and noise from the turning blades.

The reporter did a reasonably good job, but didn’t follow up on the most important points regarding these monster wind turbines. He did apparently ask a very good question, though, when it came to matter of who exactly is paying for this Cuomo con game. It’s an exceptional question, in fact, because Calpine seems to have financial issues, if you can believe this story.

Notice, however, NYSERDA wouldn’t tell how much public money is going into the project; essentially telling ratepayers and taxpayers they didn’t deserve an answer as to how their money is being spent on these monster wind turbines. No, they’re supposed to just accept the bill and the 30 new 65-story high permanent industrial structures that will grace their ridgeline. Upstaters are there to be used and abused when it comes to Andrew Coumo’s green energy scam.

The reporter also neglected to ask how much the High Bridge Wind Farm will actually generate in electricity. He simply accepted the 100 megawatt figure at face value. Calpine says it’s “approximately 100 MW” or “up to 100 MW.” There is a reason to be vague. Wind energy projects typically operated at a capacity factor of 37.4% in 2018. That means a 100 MW capacity project can be expected to actually generate about 37 MW of electricity in the real world. A natural gas combined cycle plant, by contrast, typically operates at a capacity factor of 57.6%, explaining why NYSERDA has to involved. The scam wouldn’t work without their ability to collect and deliver ratepayer and taxpayer subsidies.

Moreover, every bit of of the 37.4 MW Calpine can be expected to produce will have to be backed up by natural gas or some other dispatchable energy source that can be accessed when the wind doesn’t blow. It’s all about ensuring there is enough capacity whenever it’s needed, to supply needs at peak demand. Natural gas is much more efficient than wind, but it will still require a 65 MW gas powered peaking plant or the equivalent to back up the 100 MW capacity wind project. But, because the subsidized wind energy would be the first used, the gas plant would operate much less economically than it otherwise could, which amounts to another huge hidden ratepayer cost for wind. This is why it makes absolutely no sense to do it in the first place.

And, that is why Calpine has announced its project will be done under Article 10:

High Bridge Wind will be permitted pursuant to New York State’s Article 10 Siting Process prior to construction and operation. As part of the Article 10 process, applicants are required to provide funds to be used to defray certain expenses incurred by municipal and local parties as they participate in the pre-application scoping process and in the proceeding before the Siting Board to consider the Article 10 Application. For more information on the Article 10 Process, visit the New York State Department of Public Service’s website click here.

Article 10 is Governor Corruptocrat’s method of shoving these projects down Upstate’s throat, pushing towns into the minor role of offering their opinions to a Siting Board composed of five Cuomo hacks, all of whom are directly under his thumb (e.g., Basil Seggos, Howard Zucker), plus two residents of the affected town. It’s not hard to see how that will go.

The whole thing is major hit on Upstate, in fact. But, more than that it demonstrates the fantasy that is the Cuomo green energy policy. That fantasy is nicely captured in a New York Post op-ed by the incomparable Robert Bryce:

On May 9, six days before the Department of Environmental Conservation rejected the permit for the [Northeast Supply Enhancement] gas pipeline, the town board of Cambria (population: 6,000) unanimously rejected the proposed 100-megawatt Bear Ridge solar project. If built, that $210 million project would cover about 900 acres with solar panels…

Wind-energy projects, too, are facing fierce opposition. In February, Apex Clean Energy, a wind-energy developer, withdrew its application to build 108 megawatts of wind capacity on Galloo Island, a small island off the eastern shore of Lake Ontario…

In April, Apex announced that it was also suspending work on Lighthouse Wind, a 200-megawatt project that aimed to put dozens of 600-foot-high turbines on the shores of Lake Ontario. Three upstate counties — Erie, Orleans and Niagara — as well as the towns of Yates and Somerset, had been fighting the project for years…

As I point out in a forthcoming report for the Manhattan Institute about the ongoing shortage of natural gas in New York, the resistance to Big Wind is having an effect. According to the American Wind Energy Association, no wind projects are currently under construction in New York.

Nor has the state added much wind over the past five years. New York currently has about 2,000 megawatts of installed wind capacity. That’s only slightly more capacity than the 1,812 megawatts that the state had back in 2014.

In January, Gov. Andrew Cuomo announced some $1.5 billion in awards for wind, solar and storage projects in upstate New York. The plans call for 1,650 megawatts of new renewable capacity. But those plans ignore an obvious question: Where, exactly, are they planning to put all that solar and wind stuff?

If the last few months are any indicator, Cuomo’s wind and solar ambitions are in for a long, hard fight. Dan Engert, the town supervisor in Somerset, recently explained what is happening in rural communities like his: As big renewable-energy projects get “closer to humans and where people live, you are seeing resistance everywhere they go.”

In short, renewables can’t replace natural gas. That means that, thanks to Cuomo, shortages of the fuel are here to stay.

Bryce is exactly correct. The High Bridge Wind Farm project proposed for Guilford is a corporatist rent seeking initiative to take advantage of Andrew Cuomo’s gullibility and political ambitions. Those ambitions are as outsized as the 65 story structures proposed. Calpine is also counting on Governor Corruptocrat’s Siting Board to make it happen by sticking it to Upstate yet one more time.