The “Green Eggs and Scam” story continues to evolve with one solar fiasco after another, driven by corrupt cronyism and political correctness.

A post I wrote a while back called “Green Eggs and Scam,” which regularly gets quite a bit of daily readership on this site as solar promotion schemes continue to get lots of attention in New York, where corrupt cronyism knows no bounds. Elsewhere, both political parties continue to enable the cronyism that produces ever more green eggs & scam.

Every single day there is more evidence of solar dreams going dark, but you wouldn’t know it by the hyperbole coming out of the Cuomo administration, from the mouths of special interests or the actions of Congress. Yes, there are some individual states and nations starting to awaken to the dangers of ratepayer and taxpayer subsidy schemes that dangerously distort markets and threaten energy security, but tax credits are being extended, solar farms and utility scale projects are being exempted from normal legal requirements and slush funds are being created to funnel money to business and political cronies. 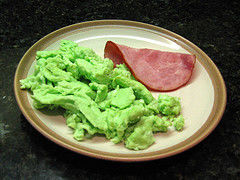 Several examples of green eggs and scam have made the news recently. Google’s Ivanpah experiment with producing solar-thermal power in the desert, for example, which depends on natural gas for backup/startup, is failing according to a recent article in RenewableEnergyWorld.com:

California regulators gave the owners of the world’s biggest solar-thermal power plant more time to avoid defaulting on a contract with Pacific Gas and Electric Co. after failing to supply power they had guaranteed.

The California Public Utilities Commission approved a PG&E proposal at a meeting Thursday that would avert a declaration of default through July 31 if the owners of the Ivanpah solar farm in California’s Mojave Desert pay the utility for shortfalls in generation. Ivanpah is owned by NRG Energy Inc., BrightSource Energy Inc. and Alphabet Inc.’s Google, and operated by NRG…

The threat of default brings into a question the future of a project that won a $1.6 billion loan guarantee from the U.S. Energy Department. Before winning the loan guarantee in 2012, plant builder BrightSource Energy told government officials that its cash position was “precarious” and said the project’s failure would be a “major embarrassment” to the White House.

Solar farm proposals are also being pushed throughout much of New York over the last year or so by companies such as SunEdison and SolarCity, with the active support of thge Cuomo admninistration. They are running into predictable opposition from the same types of NIMBYs and activists who oppose natural gas development, as well as ordinary citizens, as this article in the Batavian makes clear:

Members of the Town of Batavia Planning Board responded coolly to a proposed solar farm off of Bank Street Road at its monthly meeting Tuesday night.

The farm would produce two megawatts of electricity, which is enough energy for about 300 homes.

Scholand told board members he had to be honest — the solar farm won’t create jobs and any increase in assessed value, which means more tax revenue, will be delayed by state-backed incentives for solar installations.

“In other words,” said Board Member Lou Paganello, “the only people who will benefit are the landowner, National Grid and SunEdison.”

The Cuomo administration is now trying to clear these hurdles facing solar farm proposals and push them even harder as part of the Governor’s $1 billion NY-Sun initiative; apparently on behalf of its cronies at SunEdison and SolarCity. 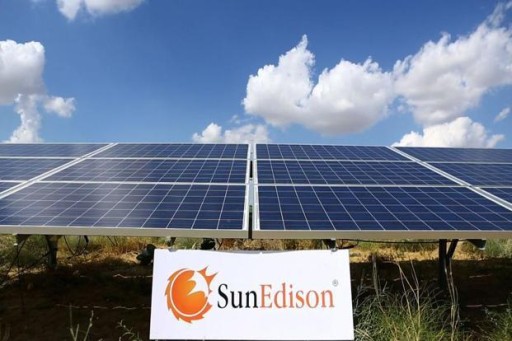 The state’s Public Service Commission (PSC), now firmly under Cuomo’s control and the Joint Landowners Coalition of New York, says “Cuomo is using the states agencies to push solar farms into our communities using your tax dollars as subsidies.” The evidence is the PSC’s recent announcement:

The New York State Public Service Commission (Commission) today announced new regulations making it faster and easier for solar energy, microgrids and other distributed generation projects to connect to the electric grid and advance the development of renewable power under the state’s new Clean Energy Standard…

The Commission’s order increases the size of distributed generation projects (from 2 MW to 5 MW) that may apply under the state’s “standardized interconnection” process. In addition, under the previous regulations, interconnection developers had to pay the entire cost of interconnections up front. That up-front cost will now be cut to 25 percent, although construction will not begin until full payment is received, according to the new Standardized Interconnection Requirements (SIR) approved today. The Commission also amended its rules to enable utilities to more-easily process and analyze the large numbers of applications currently filed by solar and other DG power developers…

“While other states have recently slowed solar development through regulatory actions, New York has strongly embraced the development of renewable power as it considers changes to encourage and promote the financing and installation of solar and other clean-power sources,” said Chair Zibelman…

New York State is committed to taking additional steps to further advance the installation and interconnection of solar and other distributed energy resources. As part of these efforts, the New York State Energy Research and Development Authority (NYSERDA) and the Department of Public Service (DPS) will provide ombudsman services to assist developers and utilities with interconnection applications and new distributed generation projects…

The State has also created the New York State Interconnect Working Group, which is made up of representatives from DPS, NYSERDA, utilities, New York Solar Energy Industry Association, and a few individual installers. While the ombudspeople will work on issues regarding individual installations, the Working Group will work to solve technical interconnect problems that affect large numbers of projects.

The role of NYSERDA in all this in interesting because that agency, too, has now been under Cuomo’s thumb for a while and who was appointed to the Board of Directors in 2014, but the founder of SunEdison, Jigar Shah:

Jigar Shah is an entrepreneur and author of Creating Climate Wealth: Unlocking the Impact Economy. He is the CEO of Jigar Shah Consulting and a board member of the Carbon War Room. Shah founded SunEdison in 2003; today the company is the world’s largest solar services company. SunEdison developed the power purchase agreement (PPA) business model, which allows customers to “pay as they go” for solar energy, eliminating any upfront capital costs of ownership. Shah graduated from the University of Illinois, and holds an MBA from The University of Maryland. Besides the Carbon War Room, he also sits on the boards of the SolarNexus, KMR Infrastructure, Prometheus Institute and Greenpeace USA. 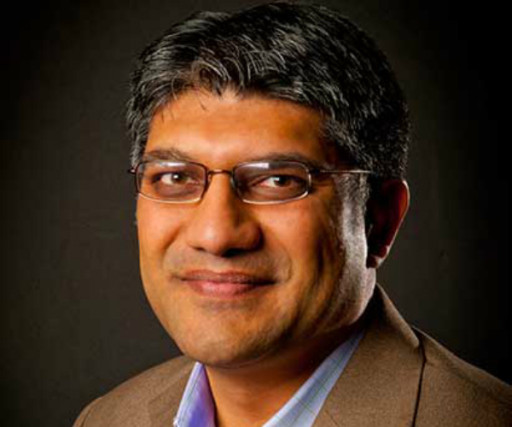 SunEdison has, no surprise, been a big beneficiary of NYSERDA/NY-SUN/Cuomo largesse, as this story from Saratoga Springs makes clear:

The city of Saratoga Springs will soon move forward with a project creating a 2-megawatt solar array to provide power at the city landfill.City Commissioner of Finance Michele Madigan said the city’s contractor, SunEdison, was successful in obtaining support from the New York State Energy Research and Development Authority (NYSERDA) through the Governor’s NY-Sun Competitive PV Program.

NY-Sun is a $1 billion initiative of Gov. Andrew M. Cuomo to advance the scaleup of solar and move the state closer to having a sustainable, self-sufficient solar industry. According to the governor’s office, SunEdison and the city of Saratoga Springs were selected among a competitive field of applicants.

SunEdison, along with the NRDC gang, is also a big fan of the Cuomo slush fund enterprise known as the NY Green Bank, about which we have earlier written here and here:

Governor Andrew M. Cuomo today launched the first step of his $1 billion New York Green Bank initiative through a petition to use approximately $165 million in uncommitted funds for the Green Banks initial capitalization. The petition was filed by the New York State Energy Research and Development Authority (NYSERDA) to the Public Service Commission (PSC). This initial funding, once approved by the PSC, will permit the Green Bank to leverage private sector financing for clean energy projects that create jobs and help make New York’s communities more sustainable…

Douglass Sims, Senior Policy Analyst at the Natural Resource Defense Council’s Center for Market Innovation, said, NRDC is pleased to see the New York Green Bank taking shape. We expect the bank, which is being designed to leverage public and private capital, also to create synergies with the State’s most effective existing clean energy programs. This comprehensive and innovative approach promises to yield more clean energy per New York dollar invested and set a national and international precedent for smart climate investment…

Fred Zalcman, Director of Government Affairs for SunEdison, a leading solar developer, said, Innovative public-private sector financing is the next frontier in unlocking the economic and environmental benefits of clean on-site generation. We applaud Governor Cuomo for having the vision to create the New York Green Bank and look forward to working with NYSERDA and the PSC to maximize the reach and effectiveness of this important new financing vehicle.

There’s just one problem with all this; SunEdison, like Ivanpah and, very likely, Cuomo’s pet project SolarCity, is going down the tubes as cronyism at the huge expense of ratepayers and taxpayers crashes into reality. 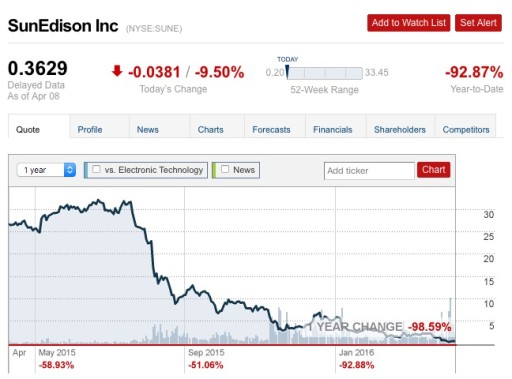 Here’s the latest on the “world’s largest solar service company” and its fortunes:

According to Reuters, “TerraForm Global Inc. on Monday sued its controlling shareholder, SunEdison, accusing the cash-strapped solar power plant builder of diverting $231 million of the company’s cash to pad its balance sheet rather than to finish important projects in India.”

What’s worse, SunEdison tanked, after one of its two yieldcos, TerraForm Global Inc. GLBL recently warned that the company is at a “substantial risk” of bankruptcy…

The stock has been on a downtrend since the second half of 2015 as investors have become increasingly cautious over the company’s ability to finance its projects. Last year, the company made a string of buyouts to expand its global operations and become the world’s leading renewable energy developer.

Vivint Solar Inc. VSLR had earlier terminated the deal related to its acquisition by SunEdison as the latter failed to meet certain obligations. We note that SunEdison has been struggling to finance its projects due to high debt as a result of a string of buyouts, including First Wind and Solar Grid Storage, made over the past one year.

The situation worsened in July last year when SunEdison entered into a definitive agreement to acquire Vivint Solar in a cash-stock deal worth $2.2 billion.

These acquisitions, once believed to be strategic, are now burning a hole in SunEdison’s pocket. The acquisitions have taken a toll on its balance sheet with total outstanding debt (including current portion) nearly doubling to $11.7 billion at the end of third-quarter 2015 from $6.3 billion a year ago. In our opinion, a highly leveraged balance sheet may limit its financial flexibility and weaken earnings growth prospects.

There’s nothing here that could not have been easily predicted by anyone familiar with the solar industry’s and, especially, the utility scale solar industry’s reliance upon direct and indirect ratepayer subsidies, renewable portfolio mandates, tax credits, special deals, requirements to buy back solar power at top price when not needed and taxpayer funds to survive. The industry is completely dependent on cronyism from top to bottom, one huge bubble starting to burst everywhere simply because its all unsustainable. Natural gas, not green eggs and scam, combined with a variety of other supplementary energy sources, including unsubsidized solar, is the answer. Lets end the cronyism.