Farm real estate values are rising in areas of shale gas production in both Pennsylvania and Texas, showing fracking is the way to save farmland.

The end of the year is always a time I feel the necessity to clean out my e-mail box and what I always find are gems I wish I had paid better attention to when I first received them, rather than saving them for a less busy day that never seem sot arrive. This year, I found an e-mail from roughly six months ago that I had set aside to be studied later, from a good friend at Farm Bureau. He had passed along some great data that came to him via a Policy Brief from the National Agricultural and Rural Development Policy Center (NARDPC). It’s a concise little report on the impact of shale gas drilling on farm rest estate values and because it’s so well written, I’m going to just pass along major parts of it. Here’s the summary, in fact:

A wave of drilling has occurred in areas with shale formations rich in oil and gas. By increasing the value of subsurface rights or by creating environmental side-effects, leasing and drilling affect self-reported farm real estate values and farm wealth. In parts of Texas and Pennsylvania, farm real estate appreciated when land was leased prior to drilling, with greater appreciation in Pennsylvania where farmers are more likely to own the rights to the subsurface. There, appreciation added $130,000 in wealth for the average farm. When drilling actually occurred, farms in and outside of shale areas appreciated at a similar rate.

The NARDPC Policy Brief was assembled by Jeremy Weber and Claudia Hitaj (Economic Research Service, United States Department of Agriculture) although they make it clear “the views expressed are those of the authors and should not be attributed to the USDA or the Economic Research Service.” The data on farm real estate values is eye-opening, to say the least. Here’s the bulk of it:

Technological developments propelled a wave of oil and gas drilling in areas of the U.S with gas or oil trapped in shale formations…By increasing the value of subsurface rights attached to the land or by creating unsightly infrastructure and negative environmental side-effects, drilling may also have considerable consequences for farm real estate values.

First, large changes in values cause changes in household wealth because farm households hold much of their wealth in real estate. As the aftermath of the 2008 housing bust showed, changes in asset values influence household decisions to spend or invest.

Third, changes in farm real estate values can help indicate how drilling affects the suitability of land for the uses that give it value, such as recreation or raising livestock.

Every five years the Census of Agriculture attempts to collect information on all places meeting the USDA definition of a farm, which is any place that would normally have $1,000 in sales of agricultural products in a year. The broad definition of a farm means that the Census collects information on much of the land in many counties. We look at self-reported per acre farm real estate values across the 1997, 2002, 2007, and 2012 Censuses of Agriculture for several counties on either side of the Pennsylvania-New York border and for counties in and outside of the Barnett Shale in the Dallas-Fort Worth region of Texas (see Figure 1). 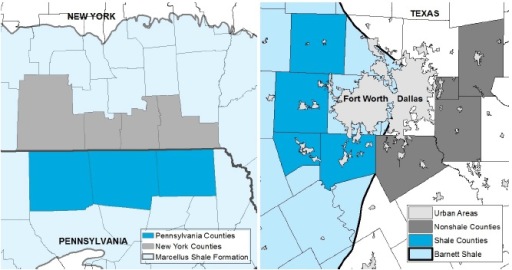 Although the New York border counties are in the Marcellus Shale, Pennsylvania accounts for more of the Shale’s total area and the industry first focused its resources there. By 2007, the PA Department of Environmental Protection had already issued 280 permits for unconventional wells (PA DEP, 2014).

In contrast, by the fall of 2008, the NY Department of Environmental Conservation had received less than a dozen permit applications for high volume fracking of horizontal wells, and had approved none of them (NY DEC, 2008). Afterwards regulatory hurdles in New York continued to prevent use of the same technologies used to intensively drill the Pennsylvania side. In the case of the Barnett Shale, the sharp eastern edge of the Shale provides a clear demarcation of areas that did and did not experience drilling based on their geology.

Because the leasing of land occurs before permitting or drilling, real estate markets likely respond to shale gas development a year or more before drilling occurs. Much leasing in the northeastern Pennsylvania counties of Tioga, Bradford, and Susquehanna of the Marcellus Shale occurred in the 2005-2008 period. Drilling then picked up in 2008, 2009, and 2010, with the number of unconventional wells drilled in the three counties increasing from 78 to 369 and finally 772.

Development of the Barnett Shale began earlier, with much leasing probably occurring in the early 2000s (see Figure 2). The number of well permits peaked in 2007 and 2008 at more than 1,600 permits approved each year (and subsequently drilled) in the four shale counties of interest. In contrast, the comparison counties, which were almost entirely outside of the shale, had less than 30 permits approved in 2008. 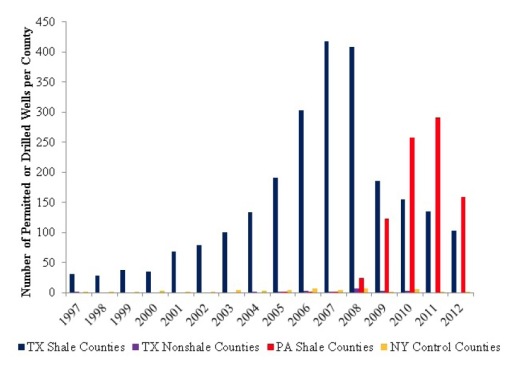 We calculate the median percent change in per acre farm real estate values for farms in the two groups of counties in the two regions for the three periods (1997-2002, 2002-2007, 2007-2012). The median percent change is the value at which half of the farms appreciated more and half appreciated less. For the change from 1997 to 2002, for example, we only consider farms observed in both the 1997 and 2002 Censuses of Agriculture, which allows us to compare the same farm over time. The same is true of the appreciation estimated for the other five-year periods.

Prior to Marcellus Shale development (1997 to 2002), farms on the New York side experienced slightly better appreciation than those in Pennsylvania. A stark change occurred in the following period, 2002 to 2007, when farms on the Pennsylvania side appreciated 28 percentage points more than farms on the New York side. The abrupt change from the prior trend suggests that greater interest in leasing the subsurface rights in Pennsylvania translated into higher farm real estate values. In a period when drilling expanded, 2007-2012, farm real estate in the Pennsylvania counties appreciated at a similar rate as those in the adjacent New York counties. 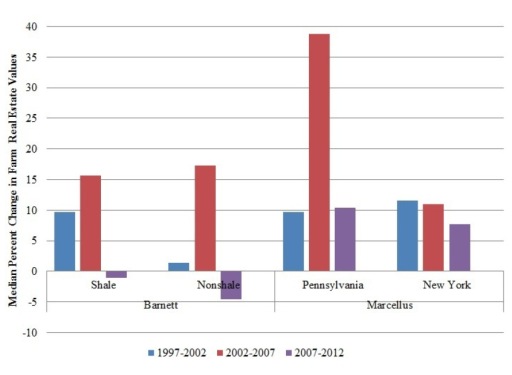 Because of the earlier start of oil and gas development, the 1997- 2002 period in Barnett Shale is analogous to the 2002-2007 period in the Pennsylvania-New York comparison. There, farm real estate also appreciated more in shale counties than in nonshale counties but to a lesser degree (8 percentage points). Over the subsequent five years, 2002-2007, when large-scale drilling actually occurred, farm real estate in both areas appreciated at similar rates. And, as drilling in the Barnett slowed, 2007-2012, farms in the shale had slightly better appreciation than farms outside of it.

In 2002 the total value of farm real estate in the three border counties in Pennsylvania was about 1.67 billion dollars. The 28 percentage points in greater appreciation for Pennsylvania farms implies the creation of about $466 million in total wealth for farmers in the three counties, about $130,000 per farm. This represents an average effect, with some farmers experiencing smaller (or no gains) and others experiencing larger gains. This wealth increase may help farmers upgrade equipment and technology to improve the profitability of their operations. To the extent that many natural-gas rich properties are sold without the oil and gas rights, shale development should not make it substantially more costly for beginning farmers to buy land.

That’s pretty clear, isn’t it? All the talk about the negative impact of fracking on farming has never been accepted by most farmers because they know the truth this little analysis uncovered – that fracking has saved the farm and some other things as well. 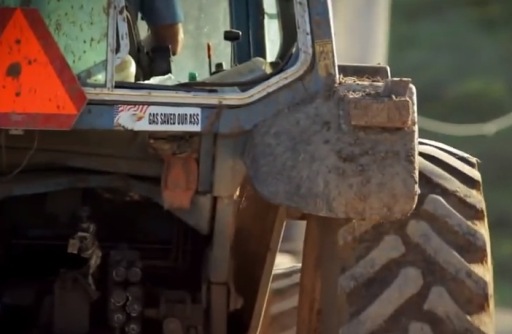