It’s rarely about the environment anymore. It’s about slashing our energy use, free enterprise, job creation, living standards and freedoms.

Back in 1970, when I got involved in the first Earth Day and nascent environmental movement, we had real pollution problems. But over time, new laws, regulations, attitudes and technologies cleaned up our air, water and sloppy industry practices. By contrast, today’s battles are rarely about the environment.

The Self-Appointed Power-Hungry Guardians of the Environment

As Ron Arnold and I detail in our new book, Cracking Big Green: To save the world from the save-the-Earth money machine, today’s eco-battles pit a $13.4-billion-per-year U.S. environmentalist industry against the reliable, affordable, 82% fossil fuel energy that makes our jobs, living standards, health, welfare and environmental quality possible. 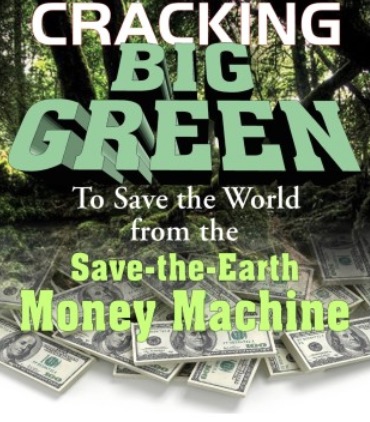 A new Senate Minority Staff Report chronicles how today’s battles pit poor, minority and blue-collar families against a far-left “Billionaires Club” and the radical environmentalist groups it supports and directs, in collusion with federal, state and local bureaucrats, politicians and judges – and with thousands of corporate bosses and alarmist scientists who profit mightily from the arrangements.

These ideological comrades in arms run masterful, well-funded, highly coordinated campaigns that have targeted, not just coal, but all hydrocarbon energy, as well as nuclear and even hydroelectric power. They fully support the Obama agenda, largely because they helped create that agenda.

They seek ever-greater control over our lives, livelihoods, living standards, liberties and wealth. They know they will rarely, if ever, be held accountable for the fraudulent science they employ and the callous, careless, even deliberate harm they inflict. They also know their own wealth and power will largely shield them from the deprivations that their policies impose on the vast majority of Americans.

These Radical Greens have impacted coal mines, coal-fired power plants, factories, the jobs that went with them, and the family security, health and welfare that went with those jobs. They have largely eliminated leasing, drilling, mining and timber harvesting across hundreds of millions of acres in the western United States and Alaska – and are now targeting ranchers. In an era of innovative seismic and drilling technologies, they have cut oil production by 6% and gas production by 28% on federally controlled lands.

Meanwhile, thanks to a hydraulic fracturing revolution that somehow flew in under the Radical Green radar, oil production on state and private lands has soared by 60% – from 5 million barrels per day in 2008 (the lowest ebb since 1943) to 8 million bpd in 2014. Natural gas output climbed even more rapidly. This production reduced gas and gasoline prices, and created hundreds of thousands of jobs in hundreds of industries and virtually every state. So now, of course, Big Green is waging war on “fracking” (which the late Total Oil CEO Christophe de Margerie jovially preferred to call “rock massage”).

As Marita Noon recently noted, Environment America has issued a phony “Fracking by the Numbers” screed. It grossly misrepresents this 67-year-old technology and falsely claims the industry deliberately obscures the alleged environmental, health and community impacts of fracking, by limiting its definition to only the actual moment in the extraction process when rock is fractured. For facts about fracking, revisit a few of my previous articles: here, here and here – and another new US Senate report.

Protection of Environment Is One-Way Street

Moreover, when it comes to renewable energy, Big Green studiously ignores its own demands for full disclosure and obfuscates the impacts of technologies it promotes. Wind power is a perfect example.

Far from being “free” and “eco-friendly,” wind-based electricity is extremely unreliable and expensive, despite the mandates and subsidies lavished on it. The cradle-to-grave ecological impacts are stunning.

The United States currently has over 40,000 turbines, up to 570 feet tall and 3.0 megawatts in nameplate output. Unpredictable winds mean they generate electricity at 15-20% of this “rated capacity.” The rest of the time mostly fossil fuel generators do the work. That means we need 5 to 15 times more steel, concrete, copper and other raw materials, to build huge wind facilities, transmission lines to far-off urban centers, and “backup” generators – than if we simply built the backups near cities and forgot about the turbines.

Every one of those materials requires mining, processing, shipping – and fossil fuels. Every turbine, backup generator and transmission line component requires manufacturing, shipping – and fossil fuels. The backups run on fossil fuels, and because they must “ramp up” dozens of times a day, they burn fuel very inefficiently, need far more fuel, and emit far more “greenhouse gases,” than if we simply built the backups and forgot about the wind turbines. The environmental impacts are enormous.

Humans Are Part of the Environment, Too

Environmentalists almost never mention any of this – or the outrageous wildlife and human impacts.

Bald and golden eagles and other raptors are attracted to wind turbines, by prey and the prospect of using the towers for perches, nests and resting spots, Save the Eagles International president Mark Duchamp noted in comments to the US Fish & Wildlife Service. As a result, thousands of these magnificent flyers are slaughtered by turbines every year. Indeed, he says, turbines are “the perfect ecological trap” for attracting and killing eagles, especially as more and more are built in and near important habitats.

Every year, Duchamp says, they also butcher millions of other birds and millions of bats that are attracted to turbines by abundant insects – or simply fail to see the turbine blades, whose tips travel at 170 mph.

Indeed, the death toll is orders of magnitude higher than the “only” 440,000 per year admitted to by Big Wind companies and the USFWS. Using careful carcass counts tallied for several European studies, I have estimated that turbines actually kill at least 13,000,000 birds and bats per year in the USA alone!

Wildlife consultant Jim Wiegand has written several articles that document these horrendous impacts on raptors, the devious methods the wind industry uses to hide the slaughter, and the many ways the FWS and Big Green collude with Big Wind operators to exempt wind turbines from endangered species, migratory bird and other laws that are imposed with iron fists on oil, gas, timber and mining companies. The FWS and other Interior Department agencies are using worries about sage grouse and White Nose Bat Syndrome to block mining, drilling and fracking. But wind turbines get a free pass, a license to kill.

Big Green, Big Wind and Big Government regulators likewise almost never mention the human costs – the sleep deprivation and other health impacts from infrasound noise and constant light flickering effects associated with nearby turbines, as documented by Dr. Sarah Laurie and other researchers.

In short, wind power may well be our least sustainable energy source – and the one least able to replace fossil fuels or reduce carbon dioxide emissions that anti-energy activists falsely blame for climate change (that they absurdly claim never happened prior to the modern industrial age). But of course their rants have nothing to do with climate change or environmental protection.

The climate change dangers exist only in computer models, junk-science “studies” and press releases. But as the “People’s Climate March” made clear, today’s watermelon environmentalists (green on the outside, red on the inside) do not merely despise fossil fuels, fracking and the Keystone pipeline. They also detest free enterprise capitalism, modern living standards, private property … and even pro football!

They invent and inflate risks that have nothing to do with reality, and dismiss the incredible benefits that fracking and fossil fuels have brought to people worldwide. They go ballistic over alleged risks of using modern technologies, but are silent about the clear risks of not using those technologies. And when it comes to themselves, Big Green and the Billionaires Club oppose and ignore the transparency, integrity, democracy and accountability standards that they demand from everyone they attack.

The upcoming elections offer an opportunity to start changing this arrogant, totalitarian system – and begin rolling back some of the radical ideologies and agendas that have been too institutionalized in Congress, our courts, Executive Branch and many state governments. May we seize the opportunity.

7 thoughts on “It’s Not About the Environment Anymore”