DRBC fracking opposition rests on speculation of risks from spills. But, the real pollution threats are all downstream. Is the public just being distracted?

Earlier this year, I wrote a post asking “When Will the DRBC Stop Commercial Shipping on the Delaware?” I pointed out commercial shipping on the Delaware gets the benefit of the doubt when it comes to the very real risks of spills, but, “when it comes to fracking, though, the DRBC would have us believe any possibility of accidents whatsoever is a reason to halt any and all activity.” Yesterday, a reader sent me an article once again pointing out the real threats to the Delaware are anything but fracking. It raises a serious question; is DRBC fracking opposition just an attempt to distract the public from those real threats?

The title of the Inquirer article is largely self-explanatory; “‘Eye-popping’ 245-ton Illegal Dump Cleared Near Philadelphia Drinking Water Intakes.” After all, there is virtually no news release from either the DRBC or its handmaiden, the Delaware Povertykeeper, that doesn’t begin with a reference to the mythical 15, 17 or whatever million people who depend on the Delaware for drinking water. And, now after months of self-serving hyperbole about the non-existent threat to this supply, we learn there was an illegal dump “situated between two of the city’s three main sources of drinking water.” But, the DRBC and the Povertykeeper are talking fracking, which hasn’t had any discernible  impact on Susquehanna.

The illegal dump apparently didn’t amount to much either, but how is it possible it got no attention from the Queen of Obstruction or the DRBC aristocrats? After all, the Inquirer (like the Povertykeeper and the DRBC) is indebted to the Haas family foundations and it called the dump “eye-popping.” The only thing about fracking that is eye-popping is the shale revolution it spawned; a revolution that has delivered us from foreign energy dependence, brought economic prosperity, reduced energy costs and cleaned the air.

There was, too, this interesting observation in the article:

By state law, the Water Department must assess any threats upstream of the intakes to ensure no contaminants or chemicals get into the supply.

My thoughts naturally turned to whether there was reference in these assessments to either illegal dumps or fracking. I searched the Philadelphia Water Department website and found nothing much about illegal dumping although I did find a Marcellus Shale Drilling page. Most of it relates to positions taken in 2011 and 2013 which were largely reasonable, indicating the DRBC could have easily addressed the concerns of Philadelphia at that time. Why didn’t it do so?

The answer is obvious; they didn’t want to. They were already entangled with the Povertykeeper and the William Penn Foundation. Moreover, it was only after the DRBC announced it planned a fracking ban that Philadelphia jumped on board to support it, proving water quality has never been at the heart of DRBC policy on fracking.

Then, there is this 2015 presentation regarding the Philadelphia Water Department’s “Delaware Valley Early Warning System.” Interestingly, it makes no mention of fracking but it does say the natural gas industry could make use of the system; another indication the city was prepared to deal with any perceived risk from fracking and it is only the DRBC that demands a ban. It also addresses real pollution threats, using this slide to illustrate some of the incidents that have occurred: 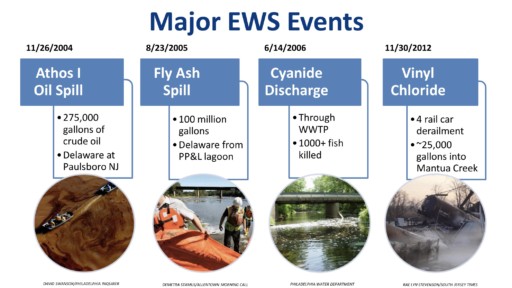 It took Merck & Co. Inc. a week to discover and report a cyanide-related discharge that killed at least 1,000 fish in the Wissahickon Creek and prompted closure of Philadelphia’s water-intake valves.

The Environmental Protection Agency said yesterday that a Merck representative first notified the agency of the spill on Tuesday.

According to the EPA, a Merck official said that a week earlier, on June 13, a vaccine-research “pilot plant” had released about 25 gallons of potassium thiocyanate into the sewer system. The substance is commonly used in making vaccines and antibiotics and should not have been discharged into the sewer system, authorities said. They suspect the chemical combined with chlorine at the sewage-treatment plant and became more toxic to fish.

Merck now faces a continuing probe by state and federal officials, and some anger from the community.

And, the DRBC and the Povertykeeper are worried about fracking 100 miles upstream that has proven to have no discernible impacts on the waters of the Susquehanna? How can anyone take these entities seriously? Their agenda isn’t water quality; it’s stopping oil and gas development that would make it more difficult to do land grabs and make a wilderness out of the Upper Delaware. Everything else is a distraction.