Despite immigration and even some natural growth, the Empire State is losing population because Upstate New York is rotting and good apples are leaving it.

The New York Post ran an editorial Saturday that speaks directly to the sad condition of Upstate New York, which is starting to affect the once Empire State as a whole (emphasis added):

Between July 2017 and June 2018, the Empire Center’s E.J. McMahon reports, 180,306 more New Yorkers fled than moved in from elsewhere in the nation — making the state one of just seven to see a population drop…

The flight from New York is no sudden fluke: The state’s share of the US population has slipped for decades…

People go where jobs are. And where they can afford to live. New York’s problem is that places where employment opportunities exist, such as in the city, are too expensive. And places that aren’t pricey, such as upstate, lack jobs.

Meanwhile, onerous taxes and heavy business mandates — the $15 minimum wage, paid-leave laws, etc. — drive away employers and their jobs. All by itself, Cuomo’s ban on fracking snuffed out a lucrative industry that could’ve helped stem the race for the exits in places like the Southern Tier.

Upstate New York, in other words, is rotting and those among the good apples who can, are leaving before the entire basket that is New York is ruined. The rest are trapped. And, it’s even worse than the Post supposes.

The Empire Center’s report is dead-on. Consider this:

New York’s total “net domestic migration” loss since the 2010 census is now estimated at 1,197,600 residents—by far the largest such decrease of any state in absolute terms, and second only to Alaska as a percentage of estimated population at the start of the decade. New York also attracted 70,375 immigrants from other countries 2017-18, ranking fourth behind Florida, California and Texas, bringing the Empire State’s combined net migration loss in the latest year to 109,391 people. Since the last decennial census, only Alaska and Illinois have had bigger net migration losses as a share of their 2010 populations.

New York was credited last year with a births-over-deaths “natural increase” in population of 61,371 people, trailing only California and Texas. However, due mainly to its large net domestic migration loss, the adjusted estimate of New York’s total population was down by 48,510, or 0.2 percent, to 19,378,012.  The total estimated U.S. population of 327,167,434 was up about 0.6 percent.

The Center also provides a table showing New York now ranks 49th out of the 50 states plus the District of Columbia in terms of growth rate and has now tipped into net negative territory. This is how far down the Empire State has already collapsed. It once had 45 seats in the U.S. House of Representatives and is projected to be down to 25 after the 2020 Census. The growth of the metro area no longer offsets the decline of Upstate New York, despite relatively heavy foreign immigration to the former.

What’s left as the good apples leave is a declining economy as far as Upstate New York is concerned; accelerating the rot. A quick check of Census median household income estimates between 2009 (when the shale revolution really started impacting Pennsylvania and 2017 (the latest data available} illustrates the problem in stark terms. It depicts the changes for Broome County, New York with adjoining Susquehanna County, Pennsylvania: 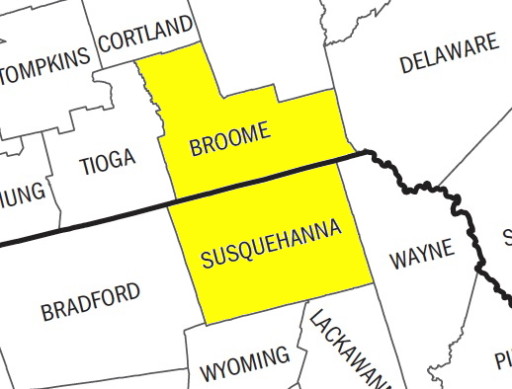 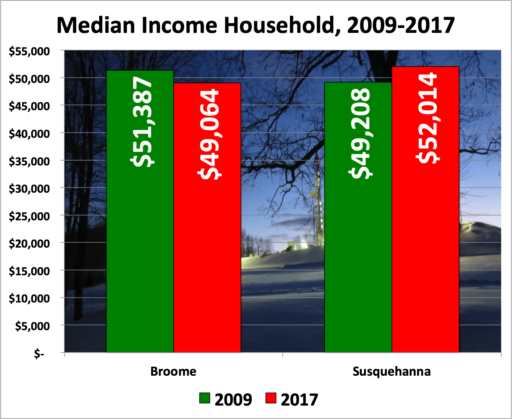 Over the course of the shale revolution, the economic position of the two counties has reversed. Rural Susquehanna County now has a higher median household income than urban Broome County, having gained 5.7% in real dollars while Broome households lost 4.5%. That’s as real as it gets and why Upstate New York is emptying out.

After decades of sharp income erosion in the face of relentless taxes, escalating living costs and wage reductions through technological changes, the full extent of this shocking exodus is laid bare in the latest US Census data.

That shows the city is losing 100 residents each day — with departures exceeding new arrivals.

“The rich in New York City are getting richer; the poor are actually getting richer, but not rich enough to be middle class,” said Peter C. Earle, an economist at the American Institute for Economic Research, who has studied other data, noting the expansion in welfare and entitlement programs.

The rot is clearly spreading. The middle class, which defines Upstate New York, is being sacrificed on an altar of gentry class virtue signaling with a corrupt Andrew Cuomo serving as the demagogic high priest. And, as Upstate goes, so goes the middle class of the entire Empire State. No one in power is listening to it and the result is not going to be pretty in the end. A recent tweet by Glenn Greenwald, liberal journalist, lawyer, and author of four New York Times best-selling books on politics and law offers a poignant observation that is as applicable to New York as it is to anywhere: 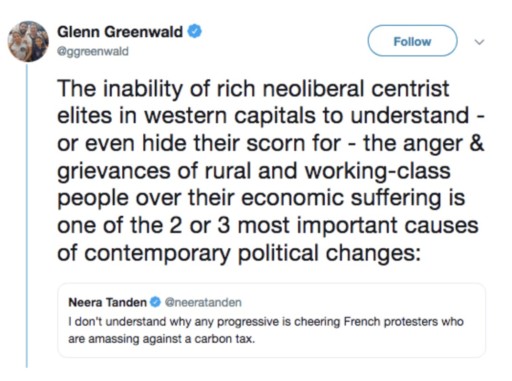 New York City may not be a capital in the legal sense, but it’s loaded up with elites such as those who compose the NRDC gang. They have nothing but scorn for Upstate New Yorkers and the middle class fleeing New York. They demand there be no fracking or pipelines. They are unbothered by higher taxes and regulations they can easily avoid by throwing money at any problem. They suppose the working class ought to just leave if they can’t make it in New York or don’t subscribe to their agenda, inartfully labeled as their “values.” Andrew Cuomo does their bidding and there will be a day of reckoning. New York is rotting.