The DRBC’s justification for its proposed fracking ban rests largely on speculation of risks from accidental spills. So what about the commercial shipping?

Earlier this month, I summarized Marcellus Shale Coalition comments on the proposed DRBC fracking ban, noting the following, which is central to the MSC’s observations:

The foundation for the ban relies, as a practical matter, upon speculated risks of inadvertent spills and releases that do not qualify as legal justification. Water acquisition, consumptive use, siting and landscapes are already addressed by other Compact provisions, leaving only Section 5.2 and reliance upon potential spills and releases as ban excuses.

Over the weekend my wife and I ran into a good friend who remarked on something highly relevant to this point I thought I’d share with you. It’s about commercial shipping on the Delaware.

Our friend commented on an eye-opening conversation he had had with an acquaintance regarding this commercial shipping; a conversation during which he learned just how much such traffic there is and what it involves. It turns out there’s quite a bit of it and it involves all sorts of products, including chemicals. This caused me to investigate a bit and what I found illustrates the absurdity of the arguments advanced on behalf of the wholly ideological and wholly political DRBC fracking ban proposal.

That part of the Delaware River below Trenton, New Jersey, is known as the Delaware Estuary, and it includes massive amounts of industrial activity. It also includes a lot of commercial shipping and barge traffic. According to this paper presented to the Transportation Research Board in 2011 (emphasis added):

[The] Delaware River has a history of more than 300 years as a commercial maritime route for handling import and export of raw and manufactured goods. Today, it has more than 40 port facilities with their associated businesses located 60 to 100 miles up the River with about 3,000 vessels visiting each year…

Delaware River is both geographically and operationally one of the most significant waterways in the East Coast. Port operations and maritime activity in the River extends from Breakwater entrance all the way to Trenton, NJ. There are two entrance points to the Delaware River port system. Around 93% of vessel arrivals are through Breakwater (BW) and the rest is through Chesapeake and Delaware Canal (CD). Vessel profiles are in line with the cargo types being carried to the terminals and are mostly tankers (TA) (30%), cargo containers (CC) (15%), bulk vessels (BU) (14%), refrigerated vessels (RF) (11%), vehicle vessels (VE) (10%) and general cargo vessels (GC) (8%). Aside of the regular cargo vessel traffic there is also tug/barge traffic carrying cargo in and out of the port.

There a total of “19 anchorages on the Delaware River,” according to the Army Corps of Engineers. That’s a lot of anchorages and a lot of vessels as well. And, there are, of course, accidents, including a tragic 2010 collision of a barge with a passenger “duck boat” that left two people dead:

The commercial shipping vehicle in this case was a 250 feet long sludge barge and the probable cause of the accident was determined to have been:

“…the failure of the mate of the [the tugboat] to maintain a proper lookout due to (1) his decision to operate the vessel from the lower wheelhouse, which was contrary to expectations and to prudent seamanship, and (2) distraction and inattentiveness as a result of his repeated personal use of his cell phone and company laptop computer while he was solely responsible for navigating the vessel.”

Two people lost their lives in this accident as a result of human error that is impossible to completely eliminate. Yet, of course, this is the standard the DRBC effectively proposes for hydraulic fracturing anywhere within the Delaware River Basin. The DRBC insists that, because landowners cannot possibly prove a negative, the value of their natural gas should be taken with no compensation and no remedy.

Moreover, the DRBC fracking ban would do so with far less justification than the loss of two human lives. Yet, those two sacrificed lives resulted in no diminution whatsoever of commercial shipping on the Delaware. Accidents were recognized as a fact of life in that instance. When it comes to fracking, though, the DRBC would have us believe any possibility of accidents whatsoever is a reason to halt any and all activity. 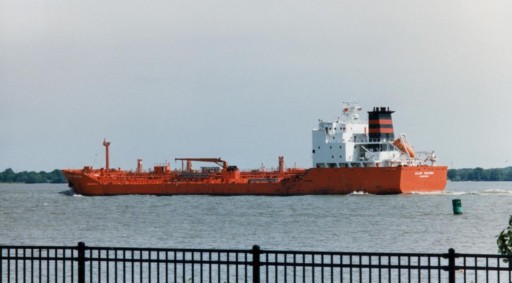 The barge and duck boat accident is hardly the only example either. There was, in 1993, a chemical spill of cumene (a product used to make acetone) into the Delaware River just south of the Betsy Ross Bridge in Philadelphia (emphasis added):

At 0003 March 31, 1993, the USCG MSO Philadelphia was notified by Tioga Marine Terminal of an acetone-like odor in the area. At the time of the incident there were partly cloudy skies, winds east 5 to 10 knots, and a temperature of 60°F. MSO personnel estimated that between 32,000 to 600,000 gallons of cumene had been released from the M/V Ellen Knutsen into the Delaware River.

The 442-foot Ellen Knutsen was docked at the GATX terminal in Port Richmond, Pennsylvania just south of the Betsy Ross Bridge on the Delaware River. The source of the release was a two-inch crack between the #5 starboard segregated ballast tank and the #10 starboard cargo tank. This crack permitted cargo to leak into the adjacent ballast tank. The ballast cumene mixture discharged into the river during deballasting.

The spill spread downstream as far as Camden, New Jersey and upstream to near the Tacony-Palmyra Bridge. GATX personnel stopped transfer operations as soon as the spill was discovered…

The product was a colorless, alkylated benzene liquid that produced a sheen in areas of heavy concentrations. The cumene moved with the flow of the river and tide and the odor of the material was detected several miles from the source.

Although cumene is not very soluble in water and only a localized fish kill might be expected, it is highly toxic to birds. The spill’s proximity to downtown Philadelphia also caused concerns about public health. The Agency for Toxic Substances and Disease Registry (ATSDR) indicated that this material was used as a motor fuel additive; was not immediately dangerous to life; was not very volatile; was combustible, but not flammable; was an irritant to eyes and the upper respiratory tract; and, depending on the concentration and duration of exposure, symptoms could include irritation, dermatitis, narcosis, and coma…

The Philadelphia Fire Department HAZMAT Team took control of the response at the incident site. Offloading and lightering operations were discontinued and the vessel remained at the GATX terminal until April 1 when it was moved to anchorage in the Delaware River to facilitate removing the product trapped under the piers. Commercial and public lands were closed until air monitoring revealed safe levels, and shipping lane and vehicle traffic route closures were in effect for the first few hours of the response. Diversionary and protective booms were placed at creek mouths and water intakes as precautionary protection for these sensitive areas. Open-water recovery or shoreline cleanup were not undertaken.

Because of the hazardous nature of the product, Tri-State Bird Rescue Research Center decided not to jeopardize the health of their volunteers by undertaking wildlife rehabilitation.

Here we have another incident, not of speculation, but of reality, where a spill of up to 600,000 gallons of chemicals went directly into the Delaware River with aesthetic effects so bad the bird volunteers wouldn’t even work. Yet, the DRBC suggests the potential for a fracking fluid spill (so small they typically are contained on site and never reach water) hundreds of miles upstream might somehow impact downstream drinking water. It’s well beyond absurd.

Some 558,000 New Jersey residents and Pennsylvanians get 19.9 million gallons of drinking water from south of Philadelphia according to Table 13 of this USGS report. I wonder if they realize how absurd the DRBC proposal is? I’m not holding my breath but I can’t help but wonder where the adults are at the DRBC. There don’t seem to be any, as any adult would quickly realize it makes more sense to ban commercial shipping in the Delaware Estuary than fracking in the Upper Delaware basin. That neither should be banned should be obvious to all.

3 thoughts on “When Will the DRBC Stop Commercial Shipping on the Delaware?”