Energy In Depth just caught charlatan Mark Jacobson in an attempted coverup of data from his own analysis showing his fossil-free plan will lose jobs.

Steve Everley at Energy In Depth, as I noted in a post back on January 6, did an in-depth, expose of Mark Jacobson’s renewable energy plan showing, with Jacobson’s own data, that a transition to renewable energy would result in massive permanent job losses. It was a total take-down and Jacobson, who is associated with Josh Fox’s Solutions Project and  Tony Infraffea’s PSE Healthy Energy group, didn’t take it well. He immediately went into coverup mode and has now exhausted what little credibility he ever had.

Steve Everley, I explained, had investigated the data behind these claims, all tabulated on an Excel spreadsheet.

“He found the massive green jobs claims were based on construction jobs, which our fractivist friends always dismiss as meaningless when it comes to pipelines, and Jacobson’s own data shows a 1.3 million net job loss across the US when it comes to permanent jobs.”

I focused on New York and observed that the data from Jacobson’s study indicated a loss of 80,113 jobs for New York State from a transition to renewables, which is pretty remarkable. It’s also at total odds with the “green jobs” claims we hear from the other side all the time.

Everley’s report was quite a revelation, especially to those of us who have witnessed how Mark Jacobson was lionized in the press for his work supposedly showing how a renewables transition, on the order of the one now being pursued by the ever politically correct Andrew Cuomo, would not only be pain-free, but actually produce new jobs. It was such a revelation, in fact, that Jacobson immediately went into coverup mode. 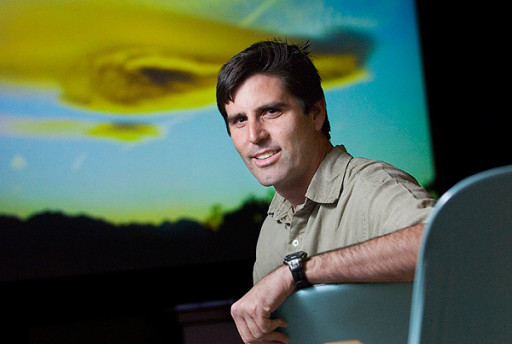 The incredible story of this attempted coverup, which has to be one of the dumbest in history, is told by Steve in a follow-up post. What happened is that, after Everley analyzed the spreadsheet used by Jacobson to summarize his findings and found a column of data clearly indicating major losses in long-term jobs from the a transition to renewables, Mark Jacobson opted to simply delete the column, deny he did so and claim Everley used “false data.” It’s astounding display of stupidity, but Jacobson apparently thought he could get away with modifying his spreadsheets after the fact and no one would notice.

He didn’t, of course, because the folks from Energy In Depth noticed the deletion and had kept a copy of the original spreadsheet downloaded from Jacobson’s website. I, too, have a copy of the original spreadsheet. The “Total Job Losses” tab of the spreadsheet now available to the public no longer shows the column to which Everley referred. A total of five columns were deleted, in fact. Jacobson has finally admitted the deletion but says it’s because the data was extraneous and not part of his actual report. That rings hollow given this Twitter exchange (in three parts) between Mark Jacobson and a rather persistent skeptic: 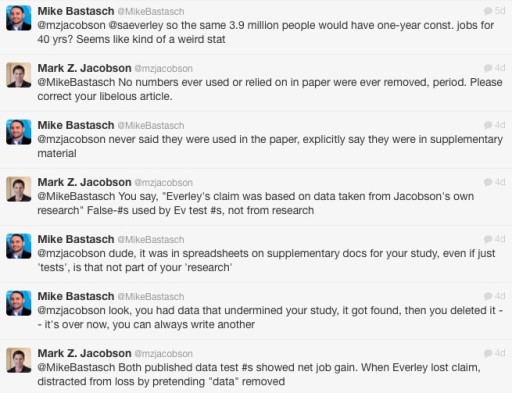 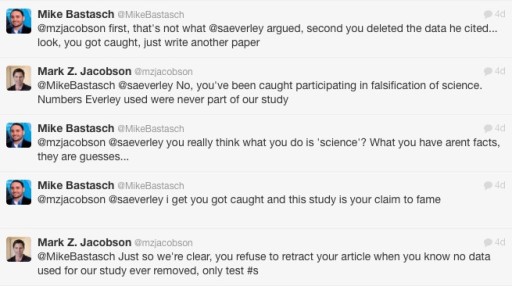 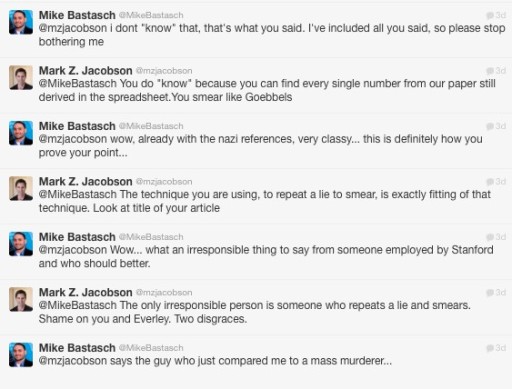 Parsing of words is taken to whole new level by Jacobson in the above Twitter exchange. Notice how he grudgingly admits deleting material (because he was caught in the act) only to make an absurd claim the data didn’t matter because it wasn’t reported in the paper he released presenting the findings of his study.

Let me illustrate with screen shots of the original spreadsheet compared to the new one. Here’s how it looks now: 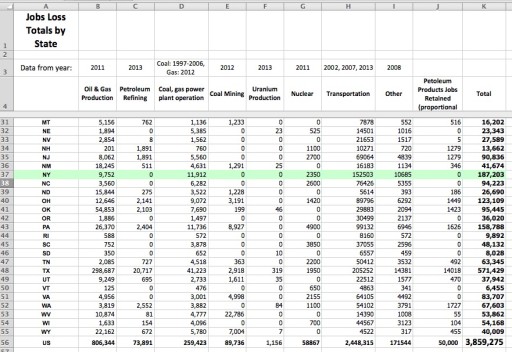 I have highlighted the New York State figures in green. Notice there is a projected employment loss in non-renewable energy industries of 187,103 jobs. Now, let’s look at the original spreadsheet. I have crunched the column width for the sake of readability and, once again, highlighted New York data. I have also highlighted the relevant formula and its inputs. 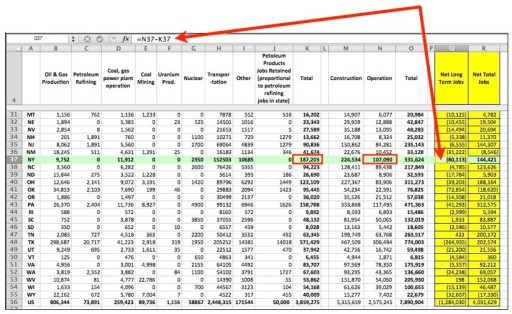 Comparing the two spreadsheets, you can see the five columns to the right have been deleted. The net long-term job losses figures to which Everley referred are found in Column J, which indicates 80,113 jobs lost in New York. The number changes to a positive 144,421 jobs gained if one counts construction jobs, but fractivists constantly tell us those are temporary jobs not to be counted when it comes to pipelines. The 80,113 jobs lost figure is derived by subtracting the 187,203 total jobs lost in other energy industries (a number that hasn’t changed in this latest spreadsheet) from 107,090 projected operational jobs. The “net total jobs” comes from adding in 224,534 construction jobs.

What’s interesting, though, is that there is no identifiable source for either the renewables construction or operation jobs number. There are no formulas or inputs to tell us how they were derived. We do find support for some similar numbers, though, in the “Infographic Data” tab of both spreadsheets. Here, there are links to calculations showing how Jacobson arrived at his numbers, which, in this case consist of estimates of 174,775 for the construction jobs and 94,644 for the operation jobs. These are the numbers, in fact, Jacobson includes on Table 9 in the study itself, where he labels them as “40-year construction jobs” and “40-year operation jobs.” 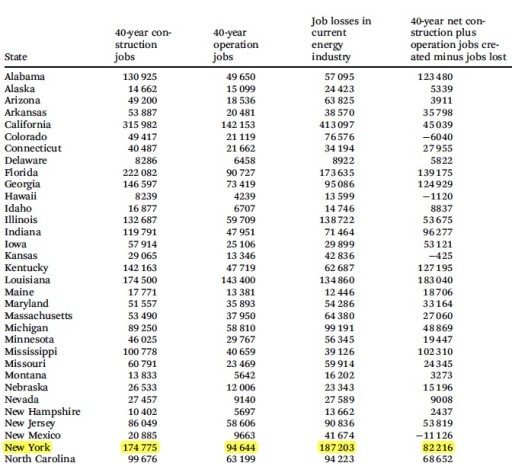 Excerpt from Table 9 of Jacobson study

Now we see why Mark Jacobson may have deleted those five columns even though he’s surely aware the coverup is always a greater risk than the deed. They appear to have been an experiment to see if inflating the renewables jobs claims might have made it possible to claim job gains from operations alone, rather than depending on those temporary construction jobs fractivists insist are meaningless when it comes to drilling wells, fracking them and building pipelines.

It didn’t work, but notice the different terminology in this case. While the study refers to “40-year net construction plus operation jobs created minus job losses,” the deleted column in question refers to “Net Total Jobs” and includes another labelled “Net Long Term Jobs” that gives the game away. The “40-year net construction jobs” label is intended to hide the fact these are not long-term jobs if playing by fractivist rules. The is why I observed in my last post on this subject that Jacobson had apparently not counted pipeline job losses in his figures. If it’s fair to count renewables construction jobs, it’s also fair to count pipeline construction jobs.

There’s another important point, as well. Jacobson is correct that he never used the numbers from those deleted columns in his study findings. He used worse numbers. If we now restored the columns and inserted the construction and operation job figures he did use, we’d have a “Net Long Term Jobs” (Jacobson’s original spreadsheet term) loss of  92,559 jobs in New York and 1.9 million across the country, 16% and 47% higher, respectively, than the numbers from the column he deleted and that’s before adjusting to treat our pipeline construction jobs the same way he treats his renewables construction jobs. That’s the real story here – Jacobson knows his plan would lead to long-term job losses.

Mark Jacobson has inadvertently exposed the kind of thinking that goes on in fractivist quarters, where snowing the press wth piles of data and as much calculus as the market will bear is standard operating procedure. I have no objection to Jacobson claiming construction jobs, except that he doesn’t recognize ours in the sam way. I do have an objection to deleting data exposing the contradiction. Yet again, it’s the coverup…