The fossil free renewable energy plan promoted by Tony the Tiger Ingraffea for New York turns out to be a job free scheme, not to mention a scam.

Kudos to my friend Steve Everley at Energy In Depth for an in-depth, must-read article exposing the Mark Jacobson renewable energy plan as a shotgun blast of crap against the wall intended to fool the gullible into imagining there are millions of green jobs out there to be had if only we converted to “clean energy.” Steve is a master analyst of fractivist junk science and proves it, yet again, with this piece tearing apart the highly touted Jacobson plan, using its own data, albeit data buried deep within the study where it was obviously intended to be hidden. He demonstrates Jacobson’s own statistics show a transition to renewable energy would result in massive permanent job losses.

New Yorkers have already heard a lot about Jacobson’s plan, which is the foundation for something called The Solutions Project; a scheme to convince the public the world can go 100% renewable energy in relatively short time. He sits on the Board of Directors, along with Josh Fox, the Little Green Bully Mark Ruffalo and Van Jones, the disgraced 9-11 truther. It is funded by the Park Foundation (who else?), the Wallace Global Fund and the Elon Musk Foundation, among others. Jacobson is also part of Tony Infraffea’s Park Foundation funded PSE Healthy Energy group of fractivist junk scientists. 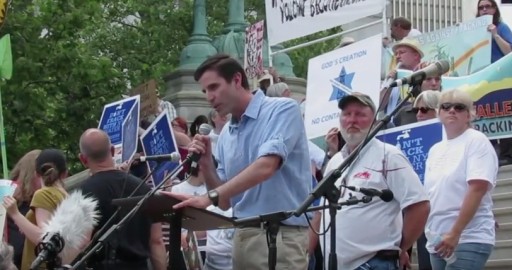 Jacobson promotes his plan to transition to 100 percent renewables during a New York anti-fracking rally in 2013. The three Pennsylvania fractivists surrounding him will be immediately recognizable, especially Dimock junkyard owner Ray Kemble.

Jacobson’s big idea first got traction in New York, in fact, when Tony’s gang (including Bob Howarth, art economist Jannette Barth, Stan Scobie, Jacobson and himself) published a journal article entitled “Examining the feasibility of converting New York State’s all-purpose energy infrastructure to one using wind, water, and sunlight.” The whole thing is ridiculous if anyone has, like me, had experience trying to get wind farms approved in upstate second-home communities largely occupied by Manhattanites, but that’s another story. The article also made some “green jobs” predictions. Among the highlights was the following:

The plan creates more jobs than lost since most energy will be from in state.

Going further the text of the study makes these specific claims (emphasis added):

Summing the job production from each sector above gives 4.5 million jobs created during construction and 58,000 permanent annual jobs thereafter for the energy facilities alone developed as part of this plan…

The number of permanent jobs created by the electric power sector alone is expected to exceed significantly the number of lost jobs in current fossil-fuel industries. The reason is that nearly all energy for NYS with the proposed plan will be produced within the state, whereas currently, most oil, natural gas, and coal used in the state is mined out of the state or country, so jobs in those industries are not in NYS. In fact, the total number of mining jobs (for all natural resources combined) in NYS in 2011 was approximately 5,700 (NYSDL (New York State Department of Labor), 2011). The total number of workers in the NYS utility industry in 2011 was about 37,100 (NYSDL (New York State Department of Labor), 2011). Even if the current electric utility industry plus mining jobs were lost due to a conversion with the present plan, they would be more than made up by with the 58,000 permanent jobs resulting from the present plan. The present plan would also result in the replacement of gas stations with electric charging and hydrogen fueling stations, likely exchanging the jobs between the industries. Similarly, the plan will require the growth of some appliance industries at the expense of others, resulting in job exchange between industries.

That analysis was prepared in 2012 and published on-line in 2013. Jacobson has since expanded his claims to now encompass the entire world – renewable energy for everyone whether you want it to not. There’s nothing these fractivist junk scientists can’t do and, by God, you’ll accept it.

Steve Everley investigated the data behind these claims, all tabulated on an Excel spreadsheet. He found the massive green jobs claims were based on construction jobs, which our fractivist friends always dismiss as meaningless when it comes to pipelines, and Jacobson’s own data shows a 1.3 million net job loss across the US when it comes to permanent jobs! It’s an astounding revelation; not unlike learning Santa Claus does exist but is really the Grinch. Read the whole article to see the deception behind the Jacobson green jobs claims and what a renewable energy transition, as fantastical as the whole idea is, would really mean.

Let’s focus on New York a bit more though. The data from Jacobson’s study (see “Total Job Loss” tab) shows the following for New York State when it comes to permanent jobs: 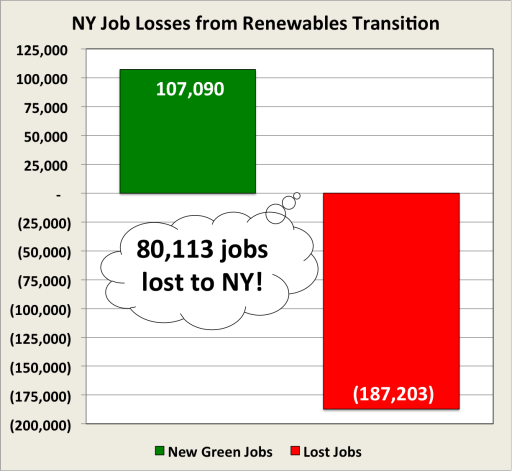 All the other job gains are temporary and, by fractivist rules, they don’t count, of course. The study estimates they will amount to some 353,868 jobs for installing all those solar panels and building all those windmills, but they simply don’t matter as claiming construction jobs is a matter of lying according to Bill McKibben. If they did count, though, there’d be another problem with the Jacobson data; he appears not to count pipeline construction jobs lost although he happily tallies green construction because that’s the only way he gets positive numbers in what he calls the “job exchange.”

The exchange is only positive in five states, with the other 45 losing out and guess what state experiences the third largest real job loss to the ephemeral green jobs future? Take a look: 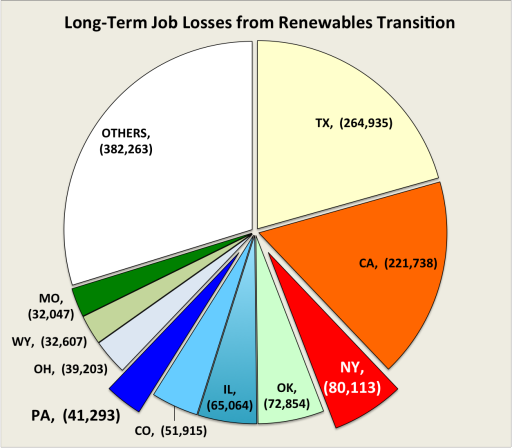 Yes, after Texas and California, New York has the most to lose from a renewable energy transition and Pennsylvania isn’t far behind, but New York can expect to lose almost twice as much as the Keystone State. Pretty amazing, huh?

There’s something else, too. Notice the 2012-13 study by Jacobson predicted “4.5 million jobs created during construction and 58,000 permanent annual jobs thereafter.” Although the text doesn’t specifically say so, it appears the first number refers to US jobs and the second references New York State jobs. There’s no obvious explanation for this mixing and matching but when one compares these with the latest Jacobson data it turns out he’s inflated both considerably. Now, he projects a total of 5.3 million US construction jobs and 353,868 for New York. He also now projects 117,495 permanent jobs, compared to 58,000 a few years ago. How did those construction jobs swell by 18% and the permanent jobs more than double in just three years? Something doesn’t add up.

No, nothing much has added up about Jacobson’s work from the beginning. It’s another piece of fractivist junk science produced by the same people who have been generating it from the beginning, paid for by all the same people as then. More than that, it’s deliberate distortion. Just look at the crafty manner Jacobson, et al used three years ago to say the 58,000 new permanent jobs would exceed those lost; they left out the ancillary jobs lost to make what was a loss appear to be a gain, as we now know. Thanks, Steve, for exposing these phonies!