100% renewable energy isn’t going to happen in the foreseeable future. The science doesn’t exist, the cost would be astronomical and the politics impossible.

There are several studies that indicate it would cost the United States trillions of dollars to transition to an electric system that is 100% renewable. Costs range from $4.5 trillion by 2030 or even 2040 to $5.7 trillion in 2030—about a quarter of the U.S. debt. The lower estimate results in a cost per household of almost $2,000 per year through 2040.

The $4.5 trillion cost does not include the stranded cost of the oil, natural gas, and coal technologies that would be disrupted. Costs can be greatly reduced by allowing nuclear as part of the non-carbon emitting mix and allowing natural gas to generate 20 percent of the electricity. Allowing existing nuclear plants to operate would save about $500 billion. Also, moving the goal to 2045 or 2050 would help to reduce costs by allowing advanced technologies to be developed and commercialized.

A spokesperson for Wood Mackenzie, who was in charge of one of the studies indicates, “In areas of the country that have a decent mix of wind and solar potential, those places can probably get to 50% renewables without struggling. Above 50%, the challenge of ensuring reliable grid operations starts to take off.” No large and complex power system in the world operates with an average annual wind and solar generation level greater than 30 percent. Another issue is that installers of wind turbines will be faced with NIMBY (not-in-my-back-yard) challenges.

Adding the required battery storage would raise the cost to about $4 trillion and adding new transmission lines would increase the cost to $4.5 trillion. The United States currently has about 200,000 miles of high-voltage transmission. The report estimates that achieving 100 percent renewables would require doubling the transmission lines, which would add $700 billion to the total price. The cost estimate does not include additional supply chain costs that could result from the increased demand for steel, construction equipment, or other supplies.

An 80 percent carbon-free target with natural gas generation providing the other 20 percent would reduce new battery storage costs by 60 percent. Natural gas provides an important back-up fuel for solar and wind power, which are intermittent technologies and are not available when the sun is not shining and the wind is not blowing. Natural gas can be ramped up or down quickly, is abundant and low cost. As such, it has helped the U.S. generating sector reduce carbon dioxide emissions, which declined by 27 percent between 2005 and 2018.

According to an analysis by the American Action Forum, the proposal to transition 100 percent of U.S. electricity production to renewable sources by 2030 would require at least $5.7 trillion of investment in renewable energy and storage. This is a ballpark estimate and not an in-depth projection, and may not include all the contingencies necessary to make the system work. The group also notes that it is likely to be a significant underestimation, as it reflects the lowest possible cost.

Assumptions of the analysis include:

• the United States would use solar power during the day, and wind power during the night;
• for the hours in the day where neither solar nor wind produce their stated capacity, a mixture of hydroelectricity and storage would be used;
• the United States would build the entirety of all potential hydroelectricity resources (a controversial issue with environmentalists and an objective that could not be completed by 2030);
• storage costs associated with batteries would be their average operation and maintenance cost, rather than the significantly higher costs of batteries that can discharge electricity quickly and repeatedly throughout the day;
• electricity demand will be roughly flat (rather than demand spiking during afternoon hours); and,
• there will be no increase in the price of wind, solar, hydroelectricity, or storage, despite the fact that demand for all of these sources would skyrocket due to such policy. 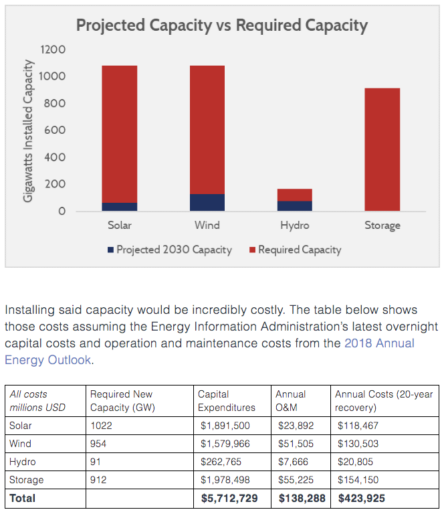 As these two studies indicate, a 100% renewable electricity system is not realistic by 2030 as the Green New Deal requires and certainly not at a reasonable cost. Wind and solar technologies are intermittent, as they depend on the weather and have low capacity factors, meaning that much more capacity would be required than the natural gas capacity that they would be replacing. Further, battery storage is currently not a viable option as the technology is expensive and still developing.

Editor’s Note: This article is a great start but doesn’t begin to account for the real costs of transition. There are two reasons.

First, as Mark Mills has repeatedly pointed out, the marginal costs of moving toward 100% renewable energy necessarily skyrocket due to the physics of energy density. It will take a scientific revolution of a whole other sort to achieve it and it won’t be with wind or solar. It will be something we haven’t yet imagined.

Second, these studies do not account for the political difficulties if 100% renewable energy. Folks who write about it typically have zero experience doing it in the field. They imagine everyone loves solar and wind and they do; until it’s planned for their backyard, at which point neighbors become stark raving mad NIMBYs. The opposition, moreover, is strongest among those who advocate for 100% renewable solutions as alternatives to natural gas.

Tony Ingraffea experienced it. I’ve experienced it, too, as even the Catskill Mountainkeeper staff and a woman wearing a gas mask showed up to oppose a solar project in one of the towns with whom I work. This particularly nauseating form of NIMBYism makes it impossible to do solar and wind on the scale that would be required to achieve a 100% renewable energy system and almost no one ever accounts for it.