The “compendium” assembled by supposed health professionals is a collection of assertions that should be called “100 or So Lies About Fracking,” and the lies aren’t limited to the document.

The first part of my last post took on the nonsense found in the just released report titled Compendium of Scientific, Medical, and Media Findings Demonstrating Risks and Harms of Fracking (Unconventioanl Gas and Oil Extraction) by the “Concerned Health Professionals of NY.” These discontents put together anything but a scientific report or even a bibliography. Rather, it’s an assemblage of allegations with nothing behind them. I addressed the major points earlier but let me now add some additional observations about their sources and point out some of the additional lies about fracking that seem to perpetually circulate among fractivists.

Lies About Fracking Are Nothing More Than Fear-Mongering

The accusations made by the ragtag group of fractivists posing as health professionals all rely upon fear and speculation, the exact opposite of what any real health professional does. You go to your doctor with your questions and fears to sort them out, get the facts and address the problem–putting your fears to rest. This group prescribes fear. Yet, as Roosevelt said, we have nothing to fear [from fracking] but fear itself. Let’s start with the fact natural gas is viewed as a solution, not a problem, by the President and his administration.

According to this piece, President Obama wants to expand tax incentives to “build fuel infrastructure and to replace oil with U.S.-produced natural gas in trucks and other transportation.” It is also planning to work with states and local governments to “coordinate review of proposed private sector projects to invest in new energy-intensive U.S. manufacturing plants relying on natural gas.”

Obama’s first Administrator of the Environmental Protection Agency also told a House committee she favored natural gas production and said she didn’t know of any “proven case” in which hydraulic fracturing had affected drinking water.   His current EPA Administrator, Energy Secretary and several other members of the administration have also endorsed natural gas as a good thing, not something to be feared. Moreover, the fears generated by the opposition have no basis in fact. All one has to do to realize this is to study the history of Dimock, for example. This headline says it all:

Yes, Dimock has faded from memory now, but just a few years ago we were told it was the poster child for fracking disasters. It turned out to a series of lies about fracking.

Time for Fewer Lies About Fracking and More Balance

Also, if we are to be guided by fear, why aren’t these “health professionals” worried about about other sources of energy? Have they considered the health implications of windmills, for example? There are certainly plenty of reports, such as this one, of physical, mental health effects from wind turbines. Wouldn’t it be sensible to compare all sources of energy rather than attack one?

Windmills also kill birds, including eagles. Isn’t this important? Here’s an excerpt from the linked page addressing this point:

Since the early 1980s, the industry has known there is no way its propeller-style turbines could ever be safe for raptors. With exposed blade tips spinning in open space at speeds up to 200 mph, it was impossible. Wind developers also knew they would have a public relations nightmare if people ever learned how many eagles are actually being cut in half – or left with a smashed wing, to stumble around for days before dying. To hide this awful truth, strict wind farm operating guidelines were established – including high security, gag orders in leases and other agreements, and the prevention of accurate, meaningful mortality studies.

That sounds just like the fear-mongering lies about fracking we keep hearing from fractivists, especially in the just released compendium, but shouldn’t a report by “health professionals” take a step up and attempt to sort out the truth, compare energy sources by effects and render a more balanced view? Of course, but we get is the opposite–the same thing you read above about windmills. So, what good is it?

Then, there is this report about solar energy production. Here’s another quote:

The state records show the 17 companies, which had 44 manufacturing facilities in California, produced 46.5 million pounds of sludge and contaminated water from 2007 through the first half of 2011. Roughly 97 percent of it was taken to hazardous waste facilities throughout the state, but more than 1.4 million pounds were transported to nine other states: Arkansas, Minnesota, Nebraska, Rhode Island, Nevada, Washington, Utah, New Mexico and Arizona. Several solar energy experts said they have not calculated the industry’s total waste and were surprised at what the records showed.

Do you see now? If we wanted to base our policy decisions on fear, we wouldn’t produce any energy. We’d just crawl back in a cave and die, because venturing from the cave involves risks. Those risks can be magnified by those invested in fear-mongering to the point we’re paralyzed. That’s what’s wrong with these lies about tracking we’re hearing from the fractivists.

The Truth About Fracking and Health

Sometimes, those lies get pretty extravagant, too, as they did in the case of Steve Lipsky (he of flaming hose fame) and those Hollywood celebrities who got punked trying to market a movie full of lies about fracking, not to mention Matt Damon’s foreign-funded movie fiasco.

Lies about fracking are everywhere it seems, but the facts aren’t so hard to find and, if the Concerned Health Professionals of NY really gave a damn about health, they’d have taken notice of this piece. Here are the relevant excerpts:

Con Edison’s massive New York steam system is in the process of undergoing a green conversion. For the last six months, Con Ed workers have been toiling away to retrofit a 111-year-old steam plant on East 74th St. from burning oil to natural gas, thereby cutting fossil fuel emissions by more than 40 percent. The hope is that the change will cut air pollution in the area while also saving money.

For years, the plant has been burning vast quantities of polluting number 6 fuel oil to provide steam for heating and hot water in Manhattan, Brooklyn, and Queens. Recently, however, a 100-plus team of skilled Con Ed laborers made progress on the gargantuan task of replacing pipes piece by piece to convert three large tenement building-sized furnaces into natural gas burning steam producers.

The project is nearly complete, just in time for the colder fall months, to provide New York with a cleaner steam system. In the long run, the plant conversion will help clean up the air in uptown Manhattan as well as two other steam plants receiving the same natural gas conversion. In an interview with the New York Daily News, Con Ed project manager Jim Shannon said it was the equivalent of taking about 26,000 cars off the road.

Now, there’s a health story, but, for some reason, it didn’t make it into the Compendium of Scientific, Medical, and Media Findings Demonstrating Risks and Harms of Fracking (Unconventioanl Gas and Oil Extraction) by the “Concerned Health Professionals of NY.” Something tells me they’re only interested in spreading lies about fracking, not dispensing facts or medical advice. Some health professionals! 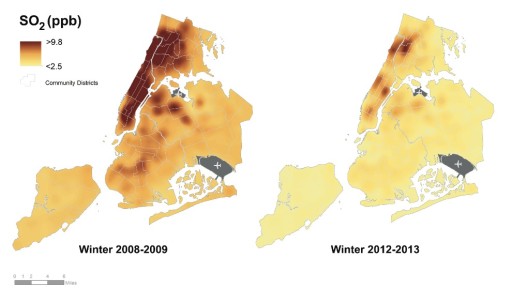