While Williamsport keeps hitting grand slams with natural gas, things keep getting worse for Ithaca and are nothing less than abysmal for Binghamton. 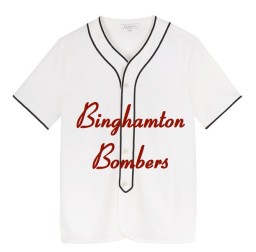 A couple of years, when Williamsport was ranked as the seventh fastest growing metro economy in the US, I wrote a post on Energy In Depth called Williamsport Explorers Beat Ithaca Winers with Walk-Off Home Run. It compared the economies of Williamsport, Pennsylvania and Ithaca, New York, to note the impact of natural gas development. Well, things have changed and there is a new team to consider; the Binghamton Bombers.

Yes, Williamsport has now risen three more notches to No. 4 on the list and Planet Ithaca dropped from No. 252 down to No. 283. Perhaps it’s time the Winers replaced Tony Ingraffea as coach. Still, they are aren’t quite at the bottom of their Upstate New York division.

The Binghamton Bombers are at No. 327 and projected to drop further over the next seven years to finish dead last at No. 363. Binghamton’s former mayor and environmental wacko, Matt Ryan, took it on this race to the bottom and it’s looking like they’re going to win unless the new mayor can turn things around. He’s going to need a lot of help from New York’s governor to do it. You can’t rebuild with an aging pitching staff and no power hitters, after all.

The IHS Global Insight did the report for the US Conference of Mayors. This report builds on the Bureau of Economic Analysis data for 2010 and looks at the period from 2010-2012.  The growth rates are summed up in this chart: 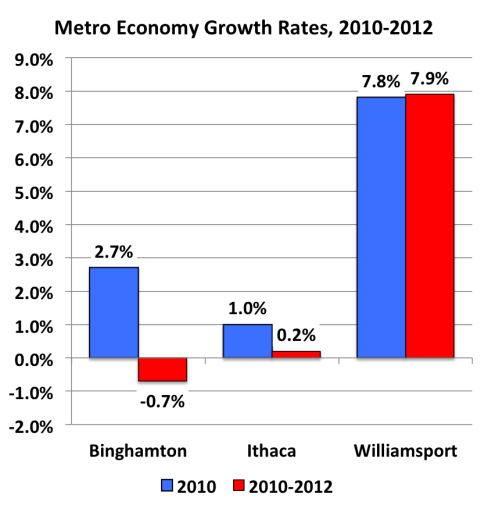 Certain parts of Ithaca, of course, are doing just fine, especially the neighborhoods where the Park family heirs, Tony Ingraffea and the Slottje duo reside. The rest of it is a case of no hits, no runs and several errors. Still, they wouldn’t want to be members of the Binghamton Bombers, who have completely struck out and given the Williamsport Explorers pitcher a perfect game. Worse, Binghamton is forecasted to come in last, No. 363 out of 363 metro areas, in economic growth between now and 2020 and isn’t expected to get to peak employment until after that.

It doesn’t get much clearer than this, does it?