Roger Caiazza dons his yellow vest to investigate just how the Empire State’s emperor plans to impose green virtue and what it portends for the future.

On October 28, 2019 I attended the Buffalo NYS Public Participation Workshop on Regional Approaches to Climate and Transportation.  I wore a yellow vest to the meeting because I believe that the policy suggested at the workshop will inevitably lead to prices that will be unacceptably high.

I also made up a handout if anyone asked about the yellow vest and that included a link to my posts on the Climate Leadership and Community Protection Act (CLCPA) page where I have posted this expanded version of the Handout DEC Workshop on Regional Approaches to Climate and Transportation.  I will post on the meeting itself later. 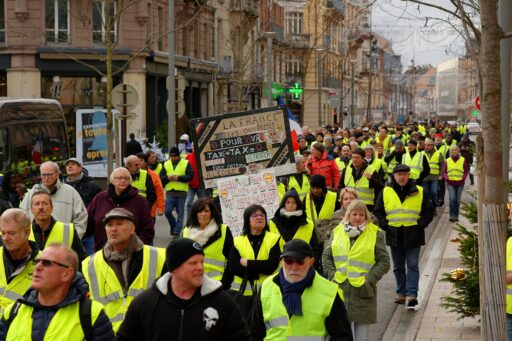 Coming soon to cities and towns across the Empire State?

There have been multiple instances where expensive climate policies were the initial spark to protests that expanded in scope to cover more issues.  The French “Yellow Vest” movement was triggered in November 2018 when fuel prices were raised.  In October 2019 protests started in Chile when subway fares were increased.  The evidence in this post and my handout suggests that a similar protest could occur in New York as the 2030 requirement to reduce greenhouse gas (GHG) emissions to 60 percent of 1990 emissions levels in 2030 included in the CLCPA legislation is implemented.

The New York State GHG Emissions 1990–2016 table lists historical GHG emissions in New York.  The State has yet to provide a plan to meet the requirements of the CLCPA.  One way to meet the 2030 emission target in ten years would be to require all these sectors to reduce their 2016 emissions 30%.  While the ultimate plan probably will require different amounts from each sector the final strategy’s reduction requirements probably will not vary too much from 30% each.

I only considered the transportation sector in my handout.  The ultimate strategy to meet the CLCPA goals will have to specify options for each component of the transportation sector.   In order to meet a 30% reduction goal from this sector the plan could call for 30% electric vehicle conversions of each of these registration categories in the New York State Dept of Motor Vehicles Registrations in 2016 table.

The transportation cap-and-invest program proposed would “cap emissions of carbon dioxide from the combustion of the fossil component of finished motor gasoline and on-road diesel fuel in the region”.  Owners of fuel at terminals would buy permits to sell the equivalent amount of fuel corresponding to the emissions cap and then New York will invest the money received in programs to reduce fuel use.  One investment could be to fund the current $2,000 NYSERDA incentive for the purchase of electric vehicles.  In the previous example that is $488 million per year and would roughly add 9 cents per gallon.

However, the $2,000 per car incentive is not working well enough to get many people to purchase them.  If the incentive is kicked up to $10,000 per vehicle then the cap cost would go up to 43 cents per gallon.  The cost per electric vehicle is just the start of the costs necessary to implement over two million electric vehicles.  What is the plan for charging infrastructure particularly in cities where residents have to park in lots or on the street and how much will that cost?

A recent poll asked the public how much they were willing to pay to combat climate change.  The poll found that “To combat climate change, 57 percent of Americans are willing to pay a $1 monthly fee and 23 percent are willing to pay a monthly fee of $40.”  Dividing the NYS annual gasoline sales of 5.73 million gallons in 2016 by the 9,480,329 standard registrations averages 50 gallons per month so the nine cents per gallon equates to $4.29 per month but would rise to $21 a month for 43 cents per gallon to fund a $10,000 per vehicle incentive.

Advocates for the cap-and-invest program point to the Regional Greenhouse Gas Initiative (RGGI) as model of a program that works.  I believe that RGGI has significant differences that make the approach unlikely to work well if at all.  In RGGI, affected sources did not have viable options to install control equipment but could switch to a lower emitting fuel.  I have calculated that fuel switching was the cause of most of the reductions and that reductions linked directly to investments from the auction dividends provided only 5% of the total reductions.

Another big difference is that affected sources have different stakes.  The TCI proposed cap and dividend approach proposes to regulate state fuel suppliers.  In RGGI affected sources were penalized if they did not comply but the TCI affected sources have no stake in compliance with the cap.  They will only sell whatever amount of fuel is specified by the cap and will not worry about how society meets the cap.  As a result, the TCI price signal has to be high enough to force the public to reduce fuel use and TCI dividend investments have to give citizens viable options that use less fuel.

There is another problem.  The RGGI dividend investment results did not reduce emissions enough to meet the cap.  If the TCI investments don’t reduce emissions sufficiently to meet the cap necessary to meet New York’s CLCPA targets, then the inevitable outcome is that there will be more demand for fuel than the cap allows and the amount of fuel available will be limited.  It is inconceivable to me that government-caused fuel outages would be acceptable to the citizens of New York.

Ultimately a cap-and-dividend program equates to a tax.  Just as taxes are invested by government for services this approach takes in money that supposedly will be invested to promote cleaner transportation, improve public health, create economic opportunities, and enhance mobility.  Before anyone can reasonably be expected to decide to support this program the State needs to provide their plan for specific programs and resulting costs.  What is the expected increase to fuel prices for this new tax and how will it be structured so that the those least able to afford a price increase not be adversely affected in general and particularly the rural poor located beyond the availability of public transit?

Most importantly, this analysis looks only at one sector.  The electric generation, residential, commercial, industrial and other sectors all have to make similar reductions.  Given that the costs of just this sector fall between the amount 57% and 23% of the public are willing to pay I believe it is clear that there will be pushback similar to the French “yellow vest” movement in New York when the costs of the CLCPA become apparent.  Roger Pielke Jr.’s Iron Law of Climate Policy states that “while people are often willing to pay some price for achieving environmental objectives, that willingness has its limits.”  New York will test that law.

One thought on “Yellow Vest Protests Coming Soon to the Empire State?”