John Quigley is Tom Wolf’s cub at DEP and he’s a particularly quarrelsome one who likes to bare his teeth and threaten the PA gas industry to get his way.

It was obvious John Quigley didn’t have the temperament to be Pennsylvania DEP Secretary. He’s one of those humorless true believers who tolerate no dissent from their personal views. Moreover, he has conflicts of interest all over the place as part of the PennFuture triumvirate that’s now doing the bidding of Pennsylvania’s gentry class under Tom Wolf’s administration. Yet, he was confirmed and now we see the result and the reason he’s there.

Tom Wolf and John Quigley are the ultimate good guy, bad guy act. The Governor seemingly exudes a positive attitude and wears a perpetual smile. Quigley hasn’t been caught smiling since he won an upset victory to become Hazleton Mayor several decades ago. Like a particularly quarrelsome Wolf cub, he loves to bare his teeth and issue threats. He did that with Range Resources recently in an act that can only be described as posturing for the sake of giving the PA gas industry a scare during an energy tax debate his pack leader is losing. 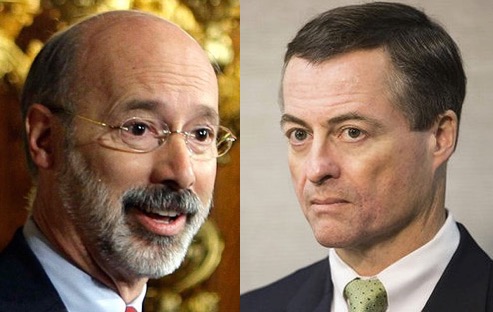 There were headlines everyplace when DEP announced it “intended” to file an $8.9 million fine against Range Resources for methane migration it says happened due to Range’s drilling activities. The headline of the Department’s news release, in fact, was “DEP Assesses $8.9 million Civil Penalty against Range Resources for Failure to Repair Leaking Gas Well.” A read of the news release, though, indicates DEP did not assess a fine but merely said it intended to assess a fine, which is unusual to say the least given Range has already appealed the DEP order from last month about the same subject to the Commonwealth’s Environmental Hearing Board.

Since when do bureaucracies, in the middle of a due process challenge, announce they intend to assess a specific fine and a very large one? Judges don’t announce their intended penalties before there’s a verdict. Obviously, this about much more than the methane problem or anything Range has done or not done. It’s about baring teeth, bullying and huffing and puffing and threatening to blow the house down by a Wolf cub who has been ordered to scare the bejesus out of a PA gas industry that’s doing an incredibly effective job challenging Tom Wolf’s energy tax. It’s pure intimidation.

The Wolf cub has no problem being the bad guy, of course. It’s his nature, after all, and one only need follow the trail of his previous utterances to find animus toward the PA gas industry all along the way. Nonetheless, Quigley hasn’t served his career well with this move because the facts simply aren’t there to support his move. He and his pack leader will get the desired headlines in the short-term but they are highly unlikely to prevail in the end with this ludicrous, and apparently politically inspired, fine. Consider the following information from Range and while you’re at it check out Nicole Jacobs’ post on the subject over at EID (lots of great illustrations):

On June 15, 2015 the Pennsylvania Department of Environmental Protection (DEP) issued a fine against Range for a well in Lycoming County. We respect and share the DEP’s mission to safely produce natural gas while protecting the environment. We believe we’ve complied with DEP’s requests and while we have a disagreement about this situation, we are very confident in the mechanical integrity of the well and we are equally confident that the environment and community are not at risk. We will continue to be transparent with the Department with the substantial data we have that proves that the methane of concern exists naturally at the surface and subsurface in this part of the state, long before our activity, and is not in any way related to our operations.

“Before Range Resources – Appalachia, LLC (“Range”) even began drilling its only gas well in the area, the Harman Lewis Unit 1H well, water wells on properties along Green Valley Road contained significant levels of methane and other gases. Specifically, pre-drill sampling and analyses made available by the Pa.DEP, as well as sampling and analyses conducted by Range, demonstrate the presence of natural gas, methane and other constituents, in area water wells at concentrations approaching the maximum solubility of methane in water. In short, it is unquestionable that methane gas in area water wells pre-dates Range’s drilling activity.” (page 2)

“Furthermore, isotopic and compositional analyses of the pre-drill gas in area water wells show that the water well gas is from a source or sources that are different from the production and casinghead gases in the Range well.” (page 2)

“Essentially, there is no objectively verifiable change in the water quality in the Green Valley Road water wells that are the subject of this investigation and the natural gas in these wells could very well be a natural consequence of where they were drilled. Relevant to this inquiry, an outcrop of the Hamilton Group formation occurs only a mile or so to the West and, as stated above, Range encountered gas at a relatively shallow depth (54 feet).” (page 3)

Mechanical Integrity of the Wellbore

“The testing of the Harman Lewis 1H well, specifically the testing performed in March 2012, proved that there is hydraulic isolation between stratigraphic layers in the subsurface preventing flow between zones behind the 5-1/2″ well casing. In short, the March 2012 well, temperature, and noise logs confirmed that there is zonal isolation behind the 5-1/2″ well casing. (page 18)

“John C. McBeath, a petroleum engineer and licensed Professional Engineer in Texas, Wyoming and California with more than 25 years of well log analysis experience, determined the cemented 5-1/2″ production casing of the Harman Lewis 1H well is in compliance with industry standards, and the well does not have defective, insufficient or improperly cemented casing.” (page 18)

“…The significance of the 70% plus bond index for six continuous feet is that field studies and Mr. McBeath’s experience have shown that is more than sufficient to achieve hydraulic isolation. In addition, the temperature survey and noise logs do not indicate any fluid movement outside the 5 ½” casing. Again, indicating that the Harman Lewis 1H well has mechanical integrity.” (page 19)

“Range’s investigation included methane, ethane and propane testing and isotopic analysis of those dissolved gases. Range also sampled and tested for 26 other ground water constituents. Any constituent tested that may have been greater than the minimum requirements for the state’s primary drinking water standards, or Maximum Contaminant Level, was consistent pre and post-Harman Lewis Unit 1H when pre-drill data was available.” (page 23)

“As early in this investigation as March 7, 2012, Dr. Scott A. Stout, Ph.D., P.G., of NewFields Companies, LLC provided Range and Pa.DEP a detailed report unequivocally stating that his analyses of 22 gas samples collected from 21 residential water wells showed “that the hydrocarbon gas in the groundwater from the residential wells is isotopically and compositionally distinct from the gas produced from Range’s Harman Lewis Unit 1H gas production well” and “[t]hus, the available data show that Range’s Harman Lewis Unit 1H gas production well is not the source of dissolved gas in any of the 21 water wells studied.” Unknown to Dr. Stout and Range at that time, his analyses and conclusions would be confirmed a year later by data provided by Pa.DEP documenting isotopic and compositional analyses of water well samples analyzed before the Harman Lewis Unit 1H well was drilled.” (page 23)

“On October 2, 2012, Pa.DEP provided additional isotopic and compositional data that effectively confirmed the distinctions originally described by Dr. Stout in the Green Valley water well gases when compared to the gases in the Harman Lewis Unit 1H well…The figure below, which includes the Pa.DEP data received by Range on October 2, 2012, illustrates and proves the point.” (page 26)

“The Pa.DEP’s pre-drill data from Effen and Schwanbeck properties taken 11 months prior to drilling the Harman Lewis Unit 1H well unquestionably demonstrate the presence of high concentrations of methane were the Green Valley Rd. groundwater as early as March 2010. Also, Dr. Stout’s supplemental analysis of the Effen and Schwanbeck pre-drill compositional data concludes that these gases in these water wells are different from each other – and different from the Harman Lewis Unit 1H well gases. (page 29)

Ultimately, Dr. Stout determines “it is not only unreasonable to consider the Harman Lewis Unit 1H well as the source of methane in groundwater along Green Valley Rd., the isotopic data provided to Range by PaDEP in January 2013 clearly show multiple (i.e., Effen-like and Schwanbeck-like) sources of methane existed in the area’s groundwater prior to drilling of the Harman, Lewis Unit 1H well in Feb. 2011.” (page 29)

It’s pretty compelling is it not? DEP has a steep road to climb to even get to the point a fine could be imposed but that doesn’t matter to the Wolf or his cub. They just want to scare the PA gas industry into backing off on its opposition to their new energy taxes and a quick headline no one will remember a year from now when the fine quietly disappears or the matter gets settled is just the ticket. It’s hardball politics. “You think you can stop me from getting my severance tax? Well, watch this, because it’s the kind of hell I’m going to put you guys through until you let me have my way.”

That’s what’s happening here, but knowing how the system works doesn’t add to your respect for it. The wolves are at the door as far as honest policy discussions are concerned and there’s one particularly scrappy little fellow biting at the heels and baring his teeth to gain a bigger piece of the prize. Too bad the Senate let the little fellow in the door to begin with.