PIOGA does a thorough examination of the law and the serious municipal risks associated with CELDF drafted “community bill of rights” ordinances.

News reports from across the country and publicity from interested organizations about litigation involving so-called “community bill of rights” ordinances have become more commonplace in recent months. These ordinances seek to ban, among other activities, lawful oil and gas operations. These efforts are bringing the significant legal, economic, and political issues to the attention of the public outside the municipalities involved—something both proponents and opponents of these ordinances want, but for different reasons.

These issues include the proper way to change a state constitution; the use of unwitting community residents to advance the political agenda of environmental extremists; the exposure of municipalities to significant damage awards; the potential for civil and criminal penalties against municipalities and municipal officials who adopt these ordinances; the unnecessary and counterproductive waste of time, money, and resources spent proposing, adopting, challenging and defending these ordinances; the loss of safe, responsible, and lawful development and all the economic activity that results; and the unnecessary creation of animosity that undermines and thwarts mutually beneficially working relationships among the affected businesses, industries and municipalities. 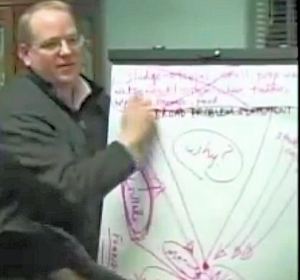 On January 4, The New York Times published an article, “Heavyweight Response to Local Fracking Bans,” 1 reporting on developments primarily in Longmont, Colorado, but also in California, Maryland, New York, Ohio, Pennsylvania and Texas. In November, The Washington Times 2 picked up a story first reported locally about an ordinance in Mora County, New Mexico. 3

No matter what particular business or industry or activity these ordinances target, all of them include these key provisions:

The significant effects of these ordinances on the municipalities and businesses involved belie the small size of the Community Environmental Legal Defense Fund (CELDF) 4, the Pennsylvania-based “public interest” law firm/organization soliciting and then convincing and aiding municipalities across the country to adopt them.

Recently, and closer to home, Grant Township in Indiana County adopted one of the CELDF ordinances in response to PIOGA member Pennsylvania General Energy’s underground injection control well, permitted by both the U.S Environmental Protection Agency and the Pennsylvania Department of Environmental Protection. In October, PIOGA petitioned to intervene in PGE’s federal court challenge to the ordinance, which also grants township residents the “right to be free from activities related to fossil fuel extraction and production,” but the court has not yet decided whether PIOGA may intervene. 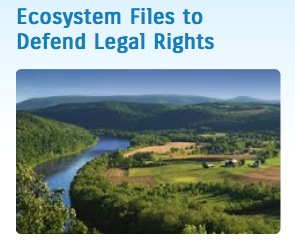 It was an ecosystem’s attempt to exercise its “rights” that attracted media attention to the Grant Township ordinance. A few weeks after PIOGA requested intervention, the Little Mahoning Watershed—described as “an ecosystem within the Township, along with its associated aquatic and terrestrial natural communities, the Little Mahoning Creek and its tributaries including East Run Creek and Mill Run Creek, and underlying groundwater systems”—petitioned to intervene in PGE’s federal court action.

CELDF, which is the township’s legal counsel, issued a press release touting the watershed’s filing as a “first-in-the-nation action” and stating that “[s]ince 2006, communities in Pennsylvania and around the country have recognized the rights of ecosystems and natural communities in law with the support of the Community Environmental Legal Defense Fund.” 5

These other communities include those named in the articles mentioned above.

This past December, StateImpact Pennsylvania reported on the ecosystem’s filing and followed up the next day with reports on National Public Radio. 6

A week later, the Johnstown Tribune-Democrat published an article addressing in more detail the unlawfulness of these CELDF ordinances in Pennsylvania and the resulting penalties and costs that could be imposed on municipalities and municipal officials who adopt these ordinances. 7

PIOGA General Counsel Kevin Moody is very familiar with this decision, which is the first by a Pennsylvania state appellate court to address the legal basis for the CELDF ordinances. Moody says, “The township’s brief in that case makes clear that the legal basis for these ordinances is based on a superior ‘right to local self-government’ purportedly reserved by Sections 2 and 25 of the Pennsylvania Constitution Declaration of Rights.” The court’s decision quoted the township’s brief said:

[P]eople are the source of all power, and communities possess an inalienable right to govern … [which] cannot be delegated, limited, or made subservient to any other power. The power of local self-government is exempt from, and hence superior to, the general government of the state. 8

Moody noted, “This is the same Pennsylvania Constitution argument relied upon by the Grant Township ordinance. The Commonwealth Court in East Brunswick acknowledged that this position reads these two constitutional provisions together to mean that local government is superior to the state, and flatly rejected it.” Moody provided this quote from the decision that explains the court’s rationale:

There are several reasons why the Township’s argument must be rejected. First and foremost, we are not prepared to reject one of the most basic precepts of governmental structure in this Commonwealth, i.e., that “local governments are creatures of the legislature from which they get their existence.”. . . Indeed, under our constitution, local government begins with enabling legislation enacted by the General Assembly [pursuant to Article IX, Section 1].

The Township’s argument stems from a flawed premise. Article 1 of the Pennsylvania Constitution sets forth a Declaration of the Rights of individual citizens, not the rights of municipal corporations. It protects individuals “against infringement by government.” . . .

Specifically, the “inviolate” rights referenced in Section 25 are those “fundamental rights [of citizens] that cannot be encroached on by the state government.” … A township is not a citizen. Article 1, Section 25 does not recognize or protect the rights of local governments from encroachment by state government.

Constitutional amendment is the legal process … by which the people may exercise their “inalienable and indefeasible right to alter … their government [pursuant to Section 2].”

…. Article 1, Section 2 is silent on how local government is changed. Accordingly, it does not authorize citizens to amend their form of local government without following the statutory procedures therefor [citing laws related to the adoption and amendment of city charters and the Home Rule Charter and Optional Plans Law). 9

“Despite this ruling, which the court affirmed twice afterwards, CELDF continues to assert in its ordinances that the right to local self-government is now recognized and secured by Article 1, Section 2 of the current Pennsylvania Constitution, even though it posts a video on its website (see below) 10 admitting that these ordinances are contrary to state and federal law and that state and federal constitutions need to be changed to authorize this so-called right,” Moody said. “I’m amazed that the video states one question to be asked is whether the proponents of these ordinances can put sufficient pressure on local officials to adopt something that is contrary to state law. The issue is simple – people don’t have the power to create rights in this way, they must follow the processes in the constitution and applicable statutes.”

Real Agenda of the CELDF

Recently an official in Conestoga Township, Lancaster County, refused to succumb to this pressure to oppose a natural gas pipeline through the township, 11 and an article on the Mora County, New Mexico, ordinance stated that many local residents that initially supported the ordinance now believe they have been used by outsiders pushing their own agenda. 12

That same article notes that of the seven fracking bans on ballots in November 2013 (three in Ohio and four in Colorado), several were in areas where there is no potential for oil and natural gas development, showing that the ordinances “are part of an attempt to build a national movement.” The May 2014 Green Watch report from which that article is excerpted 13 included commentary by Tom Shepstone of NaturalGasNOW.org describing proponents of these ordinances as “profoundly radical individuals determined not to protect the environment but, rather, overturn civil society and replace it with their own special brand of tyranny.”

And an article just published on January 7 quoted nationally known oil and natural gas attorney, scholar and former Professor Emeritus Bruce Kramer saying that attorneys who propose these as valid ordinances “are coming close to engaging in legal malpractice” and that encouraging litigation to advance these ordinances is wrong. 14

Liability Exposure Connected with the CELDF

Moody also offered his legal views on the subject:

“The East Brunswick decision showed CELDF the proper way to advocate for its social change is to amend the state constitution—and CELDF knows this because, according to its website video, the organization has assisted in preparing constitutional amendments for introduction in four states. That is what’s so frustrating for opponents of these ordinances,” he added. “It takes time and resources to challenge these ordinances in a forum where they don’t belong, when even the proponents acknowledge the unlawfulness of the ordinances. That is why we believe adopting these ordinances exposes the municipalities and municipal officials to the very real potential for civil penalties, such as federal Section 1983 civil rights actions and surcharges under state law, and criminal penalties under the official oppression statute.”

The official oppression statute is found in the Pennsylvania Crimes Code, 18 Pa. C.S. § 5301, and imposes criminal liability on any “person acting or purporting to act in an official capacity…if, knowing that his conduct is illegal, he…subjects another to…infringement of personal or property rights…or denies or impedes another in the exercise or enjoyment of any right, privilege, power or immunity.” Moody said, “That sure looks like what’s happening when municipalities adopt these ordinances. That also raises the issue of whether municipality insurance will cover the costs associated with these activities, further exposing them to significant costs.”

Moody stated that PIOGA will vigorously fight these ordinances on multiple fronts.

“PIOGA will continue to explore all avenues of opposing these unlawful ordinances because it is clear that the proponents of these ordinances will continue their sham of an existing ‘right to local self-government’ under the Pennsylvania Constitution as justification for these ordinances. Allowing each local community to self-govern would prevent the orderly flow of government in everything from traffic to taxation and ensures that NIMBY (‘not in my back yard’) would prevail, paralyzing development and progress for the greater good.”

13 “Mora County and the Parachute Organizers, Environmental extremists target a poor county for a ban on all drilling, not just fracking” – capitalresearch.org/wp-content/uploads/2014/05/GW1405-final-for-posting- 140428.pdf , p.4.

7 thoughts on “The Unconstitutional CELDF “Community Bill of Rights””