Our friend Mark Mathis at the Clear Energy Alliance has just produced one his most effective videos. It’s about U.S. oil and gas production and emissions.

Mark Mathis has put out a lot of good stuff, but I especially like his latest video on the subject of U.S. oil and gas production (up dramatically) compared to air emissions (down dramatically). A lot of us spend a lot of time explaining those facts but there’s nothing like a video, combined with some common sense commentary from Mark Mathis of the Clear Energy Alliance.

One of the really nice thing about Mark’s videos, when he posts them on YouTube, is that he always includes the transcripts, too, which makes it a lot easier to take advantage of his fact gathering. Here is the one accompanying the above video, with a couple of of screen shots interspersed and some emphasis added on the most relevant facts about U.S. oil and Gas production:

U-S-A… U-S-A… Wouldn’t it be great if we gave ourselves credit for doing amazing things that weren’t sports-related? For example, the United States is the gold medal champ in energy production. At the same time, it is the world leader in reducing air pollution and greenhouse gas emissions.

Look… we’re not putting the rest of the world down. We just think everyone should acknowledge that America is providing the resources that power everything we do. Simultaneously we’re reducing the impacts of that energy consumption.

Because of the shale revolution, the United States has increased crude oil production by an astounding seven million barrels per day since 2010. America’s 12.2 million barrels a day as of April 2018 is a national record. We produce more oil than any other country in the world and are truly energy secure for the first time in more than a half-century. 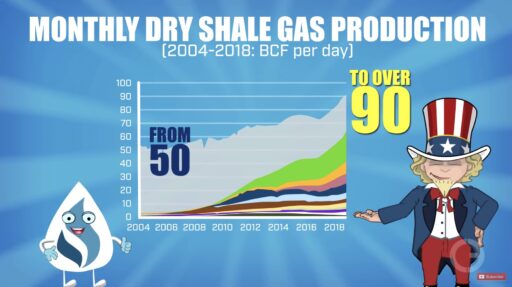 Like oil, U.S. natural gas production is also setting records and is a world leader. From 2004 to 2018 U.S. dry natural gas production grew from 50 billion cubic feet per day to more than 90. Most of the growth in natural gas is also from shale, specifically the Marcellus and Utica formations in the northeast and in the Permian, Haynesville and Eagle Ford in Texas.

While all this dramatic growth in oil and gas was going on, something equally amazing was happening at the other end of the spectrum. Emissions of all kinds were going down. According to the Environmental Protection Agency, since 1970 emissions of the six most common pollutants are down by 71 percent. This happened while the number of miles we drive in our cars and trucks increased by nearly 200 percent. 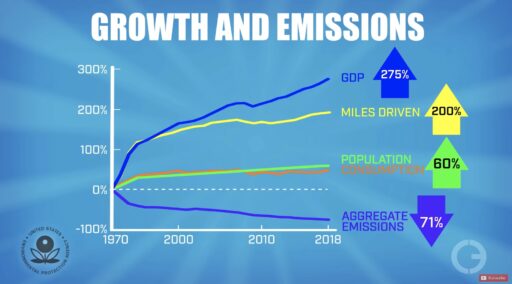 Our overall energy consumption has been relatively flat even as the U.S. population has grown by 60 percent and our gross domestic product is now 275 percent greater. Since 1990 we’ve added 730 thousand miles of pipeline and yet methane emissions from distribution systems have fallen by at least 70 percent.

Come on… you’ve got to admit, that’s some pretty amazing stuff. We at the Clear Energy Alliance are not all that concerned about carbon dioxide emissions affecting the climate. But if you are, the news is pretty spectacular on that front as well.

As our Gross Domestic Product has risen dramatically, our emissions per capita and per dollar of GDP have fallen significantly. Here, too, America is leading the world. In the electricity generation sector, carbon dioxide emissions declined by 28 percent since 2005 and more than 4 percent since 2016. Those reductions have mostly happened because of increased use of natural gas, not wind and solar.

The Energy Information Administration expects that trend to continue, predicting a decline of 8 percent in 2019. While our CO2 emissions are headed south, other countries such as China and India are dramatically INCREASING theirs.

I know, we threw a lot of numbers and graphics at you in a small amount of time. You can always watch the video again. The bottom line is the U.S. is kicking butt in the things that really matter. So, go watch a game, breath that clean air, and know the USA is number one. To the rest of the world we say, catch us if you can.

Well done, Mark! Love it and agree with every line.

1 thought on “U.S. Oil and Gas Production Up, Emissions Down; Catch Us If You Can!”