Fractivist junk science gets more free publicity than Kim Kardashian, but what will happen now that one of its towering studies has collapsed into a heap?

We told you about a recently withdrawn University of Cincinnati/Oregon State University air pollution “study” from last year. It turned out to be a sham. We just didn’t know how much of a sham. Energy In Depth has the story and it’s a doozy. The errors made in the original are simply staggering. What was a towering example of fractivist junk science has completely collapsed into a pile of rubble.

Set Whitehead at EID, does a marvelous job contrasting the original fractivist junk science with the revised report. Consider, for example, the following:

Original Study Claim: “Closest to active wells, the (cancer) risk estimated for maximum residential exposure was 2.9 in 10,000, which is above EPA’s acceptable risk level.” 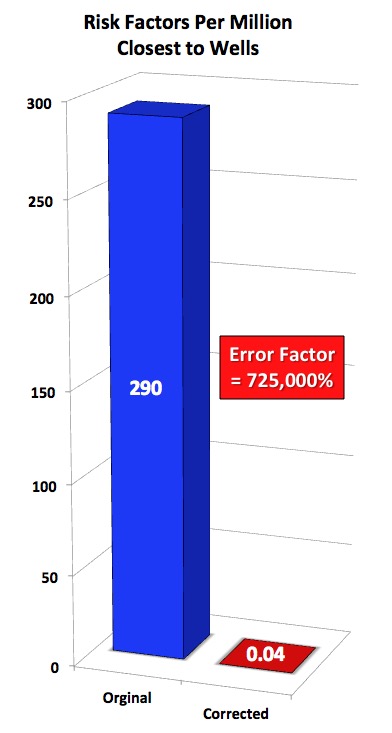 Corrected Study: “At sites closest to active wells, the risk estimated for maximum residential exposure was 0.04 in a million, which is below the U.S. Environmental Protection Agency’ s acceptable risk level.”

You don’t need to know much more than this, do you? If you’re off by a factor of 7,250 to 1 there isn’t really anywhere to go. Read the whole story, but it’s all right here in this one chart. Such is the nature of fractivist junk science. This study was designed and managed by a fractivist. It used fractivist volunteers. It was formulated to produce the desired results. It then got repeated endlessly by a fawning press co-opted and funded by fractivists. Now, it’s collapsed into a heap of apologies none of these media folks are much interested in reporting.  Don’t expect a retraction from Damascus Citizens or any of the other special interests who pushed this “study” out the door as propaganda.