Is it too much to ask that fractivists check their facts before making wild accusations about a compressor station or must windbags always take on a blower?

One person quoted in an article in a June 11, 2015 Daily Star claimed she knew the pollution a the compressor station would go either to Otego or to Franklin.  She also claimed the contaminants would include benzene, toluene, formaldehyde and methane.  Well, one out of four correct is not too bad for a NIMBY.

Methane appears to be the only possible pollutant likely from Marcellus Shale gas.  According to this industry presentation, Methane makes up about 74.2 percent of wet gas in the Marcellus.  The other three, benzene, toluene and formaldehyde are missing from actual Marcellus gas.  I suppose they were sexy for NIMBY rhetoric due to the fact they are all known carcinogens. 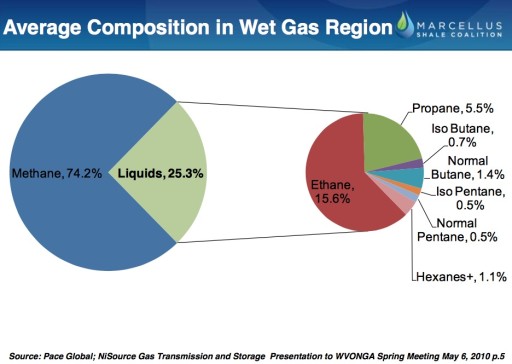 Ethane is extracted for use as a feedstock for ethylene production.  Generally, ethane is 90% removed from natural gas.  It is not too scary as a pollutant unless one gets a large dose (between 3.0 and 12.5% by volume) and ignites it – Boom!, or, touches the extracted ethane, which can cause frostbite – Brrr!

Propane is also extracted from natural gas.  Many upstate homes use it for cooking and/or heating.  I think we generally know the dangers here.  Don’t let yourself get burned!

Butane and some forms of iso butane are used in fuels, propellants or as petrochemical feedstocks.  When mixed with propane, the mix is often called liquid petroleum gas (LNG).  Inhalation of butane is generally not recommended due to the euphoria and associated brain damage.  Usually this occurs when some fool snuffs canned paint.

Hexane is commercially produced from crude oil and is one of the most dangerous of the inhalable constituents.  Why, it is noted that 5,000 parts per million inhaled for 10 minutes may produce vertigo! It might be important to note that Chinese workers manufacturing IPhones were reported as having suffered hexane poisoning.  Maybe the antis could go to China to protest against natural gas to protect those poor workers.

Pentane and iso pentane are used commercially as solvents in much the same way as butane and hexane.  It generally is liquid below 97°F, so don’t go fooling around a compressor station on all those 100° days!

Sorry, Anti Anne, but none of these seem to be as sexy as what you seem to believe exists.  None cause cancer and all are safe in moderately large doses unless one tries to light the exhaust during a blow out.  By the time any of these get to Franklin or Otego, they will be too dilute to burn, let alone hurt someone.

Another mental giant in the article was someone who claims to be a veteran of the television and film industry (does that scare anyone?) who was worried that the Town had not passed protective ordinances against the pipeline industry.  He claims that an ordinance is needed to protect the community even if they have a signed road use agreement.  I guess he has not heard about contract law.  Maybe that is why he works in TV.

A candidate for the Franklin Town Board urged people to load local radio talk shows because “many dairy farmers listen to such programs while milking”.  I am glad to hear that a major portion of Franklin voters are dairy farmers.  They seem to have dropped out of Otsego County in droves.

Once again, we find antis spreading falsehood and fear.  These are their stock in trade.  Those with a mind to use should always take anti-development cries with a large grain of salt.  Don’t just believe me, do the research yourself!  Only by knowledge can we hope to turn those who hope to dupe us into what they are.  Hollow drums making lots of noise with only air.

3 thoughts on “Tilting at a New Windmill…er Compressor Station”