Tom Wolf, Pennsylvania’s governor, seems to be doing everything he can to destroy its economy the last few days. What’s wrong with the Wolfman?

Governor Tom Wolf has now shut in a good part of Pennsylvania. That includes Wayne County where I live despite it having a mere six Wuhan (COVID-19) virus cases and no deaths, the same as it had the day before he shut us in and shut us down. Simultaneously, he vetoed HB 1100, the bipartisan package of economic revitalization bills endorsed by both industry and labor that would have cost nothing in terms of current revenues. But, he said he’d spend $50 million of our money on the Wuhan virus on top of the $2.2 trillion just printed by Congress. You figure it out, but it looks to me as if the Wolfman views Pennsylvanians as sheep.

The Wolfman, to be sure, is a strange animal. He’s personality free trust-funder who who never seems to engage, preferring to simply put on airs as a substitute for astuteness. One can sense he “doth protest too much” when he utters sweet nothings about not taking shut-in, shut-down decisions lightly. Yes, it’s true he always starts small so we imagine he’s being reasonable but, before you know it, you’ve gone from being a county out of the maelstrom to being called the heart of the battle. Go to sleep thinking you’re safely ensconced in what others see as a refuge and wake up to guns blazing at you as if you’re the enemy.

That’s how many of us in Wayne County feel today. Nothing changed, but overnight we were added to a list of counties locked down. Is it because we border New York? The fact we’re next door to Monroe and Pike Counties where all those New Yorkers have been moving for decades? The fact we are a bunch of rabble-rousers daring to make noise about being the only county in Pennsylvania with gas that isn’t allowed to develop it?

I really don’t know, but a lifetime of dealing with government has made me cynical and the Wolfman is vindictive, so I’m not entirely discounting the third possibility. Especially when I know our rate of infection (0.012% or slightly over one-hundredth of one percent) is well below the Pennsylvania average.

There is another factor, as well. The Wolfman can’t run again in Pennsylvania, but he could run for Vice-President. He could also take a job in a Democrat administration, which means he has an incentive to starve the Pennsylvania sheep and help ensure President Trump doesn’t take the Keystone State again.

That’s really cynical of me, of course, and some of you might take offense, but we see that sort of thing occurring in other states, don’t we? Two Democrat governors have gone so far as to spitefully outlaw hydroxychloroquine, for example, so we can’t rule out anything. I want to believe the governor. I even have a “Closed, Helping the Governor” sign on the outside of my downtown office door. The problem is this; shutting down Wayne County is the unreasonable, over-the-top behavior of a wanna-be totalitarian.

And, this is precisely the same thing we see with the vengeful veto of HB 1100. The Wolfman is angry and snarling inside. He’s tried and tried and tried again to get a severance tax but failed every single time. His lies and deceptions were obvious to all. They didn’t work.

What has worked, though, is HB 1100, a package of bills that would incentivize economic development from future revenues after companies already invested hundreds of millions of dollars of new investment, hired hundreds of unionized workers and paid those workers prevailing wages. It passed with large majorities that included members of both parties and former Democrat, now Independent Senator John Yudichak. HB 1100 got the support the Wolfman craved and it wasn’t his idea. It was also opposed by the Delaware PovertyKeeper and other representatives of the trust-funder class.

So, the craver became the caver; a spoiler determined to destroy what he couldn’t claim as his own. He chose to align with fellow trust-funders rather than the trades, which is exactly why, of course, he lost John Yudichak. Some folks just don’t learn. And, if you want take things down to another level of pathetic, read the Wolfman’s veto message. Here are best worst parts (emphasis and comments in red added):

Rather than enacting this bill, which gives a significant tax credit for energy and fertilizer manufacturing projects, we need to work together in a bipartisan manner to promote job creation and to enact financial stimulus packages for the benefit of Pennsylvanians who are hurting as they struggle with the substantial economic fallout of COVID-19. [Excuse us, Governor, but this IS very much a bipartisan bill offering jobs and a stimulus.]

The petrochemical and natural gas industries play an important part in Pennsylvania’s energy- efficient and energy-sustainable future. I am fully supportive of this type of economic development within the Commonwealth. However, we have a duty, as custodians of taxpayer funds, to ensure that taxpayer-funded economic development incentives, like the proposed tax credit, are a responsible use of the Commonwealth’s limited resources. [The tax credits come from future revenues that wouldn’t be realized without them, Governor. There is no impact on current resources. They are increased, not decreased.] Further, the required capital investment from companies and required job creation thresholds that must be met in order to receive the credits must adequately align with the level of economic development incentive. Furthermore, this bill does not guarantee the creation of jobs paying prevailing wages, wages Pennsylvania’s workforce deserves when a project receives this level of financial commitment from the Commonwealth. Although the bill requires payment of prevailing wages for facility construction, the requirement is illusory because the critical enforcement and investigative tools provided under the Pennsylvania Prevailing Wage Act are absent from this bill.  [You’re talking in circles, Governor. The Prevailing Wage Act is the source of enforcement authority and all the trades supported HB 1100. You sold them out.]

I could be supportive of awarding an incentive such as this, but only after a thorough analysis of a proposed project and the inclusion of appropriate enforcement mechanisms to ensure that workers constructing these types of facilities rightfully are paid prevailing wages. While I am always supportive of business development here in the Commonwealth, I am also focused on making sure that we are investing taxpayer money in, projects that protect our workforce, support our communities and provide the financial stimulus needed to stabilize and grow our economy during this time of crisis. [You will only do it when you can take full credit. We get it. Just one question. Will you defy the PovertyKeeper?]

What a joke. What a pitifully shallow excuse for selling out Pennsylvania workers at a time when you’re telling every to stay in their homes for no good reason in most cases. Has the Wolfman taken notice of his own unemployment statistics? 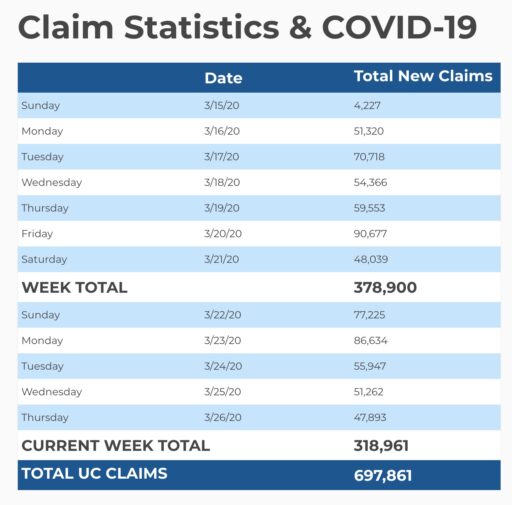 The data shows Pennsylvania has been hit harder than any other state with unemployment as a result of the Wuhan COVID virus and the Wolfman wants to shut down counties with six cases and veto a jobs bill? Great timing.

Look, the message on my door about “helping the governor” is not sarcasm. It’s real. I do want to help; like every other Pennsylvanian. I am also blessed that my work doesn’t require me to be in my office. It’s also easy to second-guess and until one has had the responsibility for the safety of others in the way the governor does it’s not especially fair to carp. Is it fair, though, to treat so much of Pennsylvania the same when it’s not? Is it fair to kill a jobs bill in the middle of the worst unemployment for what appears to be spite? I think not. Senator Yudichak doesn’t think so either:

“The veto of House Bill 1100 places Governor Wolf on the side of anti-job, radical environmentalists who have maliciously misrepresented the facts on this pro-worker, pro-jobs piece of legislation and places the Governor’s policies squarely in opposition to legislation that has the potential to attract thousands of prevailing wage jobs and billions of dollars in private investment to Pennsylvania when we need jobs more than ever.”

Will the governor listen? Well, he hasn’t yet. But, there’s always hope and I hope Senator Yudichak and others will rise to override this ridiculous veto by the Wolfman. Let’s not be sheep.

1 thought on “The Wolfman Threatens Pennsylvania Sheep with Poor Choices”