Tom Wolf has prioritized lining up with corrupt New York State over the welfare of Pennsylvanians and we’re being played for fools by a WuFlu tyranny.

I have, over the last month or so, been analyzing Pennsylvania Health Department data on the Corona virus, a/k/a COVID-19, which I prefer to call the WuFlu because it originated in Wuhan and resembles the flu in many respects. I’ve been posting a link to my analysis of the data on this site in the upper right-hand corner. I’ve also written about it here, here, here and, most especially with regard to the subject of this post, here.

I also share the data daily with about 30 folks who generally agree we’re suffering from a WuFlu tyranny that is destroying us in every way. I’ve become increasingly angry with Governor Tom Wolf and I would say Andrew Cuomo but the latter hit 10 on my anti scale a long-time ago. I’m angry with Wolf because it’s become blatantly obvious we’re being played for fools. That’s why I’m sharing today’s data here.

Before even getting to the key points from today’s data, let me explain why it’s become absolutely obvious we are being played. There’s always the possibility the reporting is extremely shoddy and, surely, that will be the official explanation from the WuFlu tyranny headquarters. Regardless, the idea that we are destroying an economy, wrecking lives and driving people into health-threatening despair on the basis of this data by is beyond belief.

We are, in fact, at a point where, if the Governor refuses to stop following New York’s lead, the only course available to strike back at the WuFlu tyranny will be mass civili disobedience. And, that’s not good because there are things we need to do things such wearing masks in public places, but our state government and especially New York’s, are destroying any credibility they had.

It started with New York, of course. Everything to do with this WuFlu tyranny does. If it were not for New York City, our nation wouldn’t even be in the top 10 of those impacted. More significantly for us in Eastern Pennsylvania, our economies are inextricably linked to the Big Apple, as folks escaping it migrate or visit here. And, even people who love New York City do want to leave it, even if but for a brief time. No one wants to be suffocated by its crowded elevators, sidewalks, streets and subways 24/7. Those crowded artificial environments just happen to be prime breeding grounds for the Wuhan Corona virus, too, and, in escaping from them, city residents have brought the virus and the WuFlu tyranny to places such as Pennsylvania.

Given the nature of New York’s Governor Cuomo and New York City radical Mayor Bill DeBlasio, it was hardly a surprise when we learned this:

New York City’s health department released a revised COVID-19 death count on Tuesday that included those who were not tested but were presumed to have died from the disease. That added an additional 3,700 people to the toll, bumping the city’s total deaths well over 10,000. The additional 3,700 deaths amount to an increase of 17 percent added to the U.S.’s coronavirus death count…

Yes, the nation’s numbers were bumped up 17% in one fell swoop by New York City deciding to include “just possibly maybe” cases. It had good reason to do so, of course, because it wants more and more help from the Federal trough. It will continue to suck on that teat as long and as hard as it can. It was no coincidence Nancy Pelosi just asked for such help as the price of getting a small business aid fund replenished. The inclusion of best guess numbers in the counts ensures 100% reimbursement of costs at city hospitals and builds a case for more still more gravy for the city and the state.

Now, we see what certainly appears to be the same thing happening in Pennsylvania. Here is the latest data for Pennsylvania, taken from here: 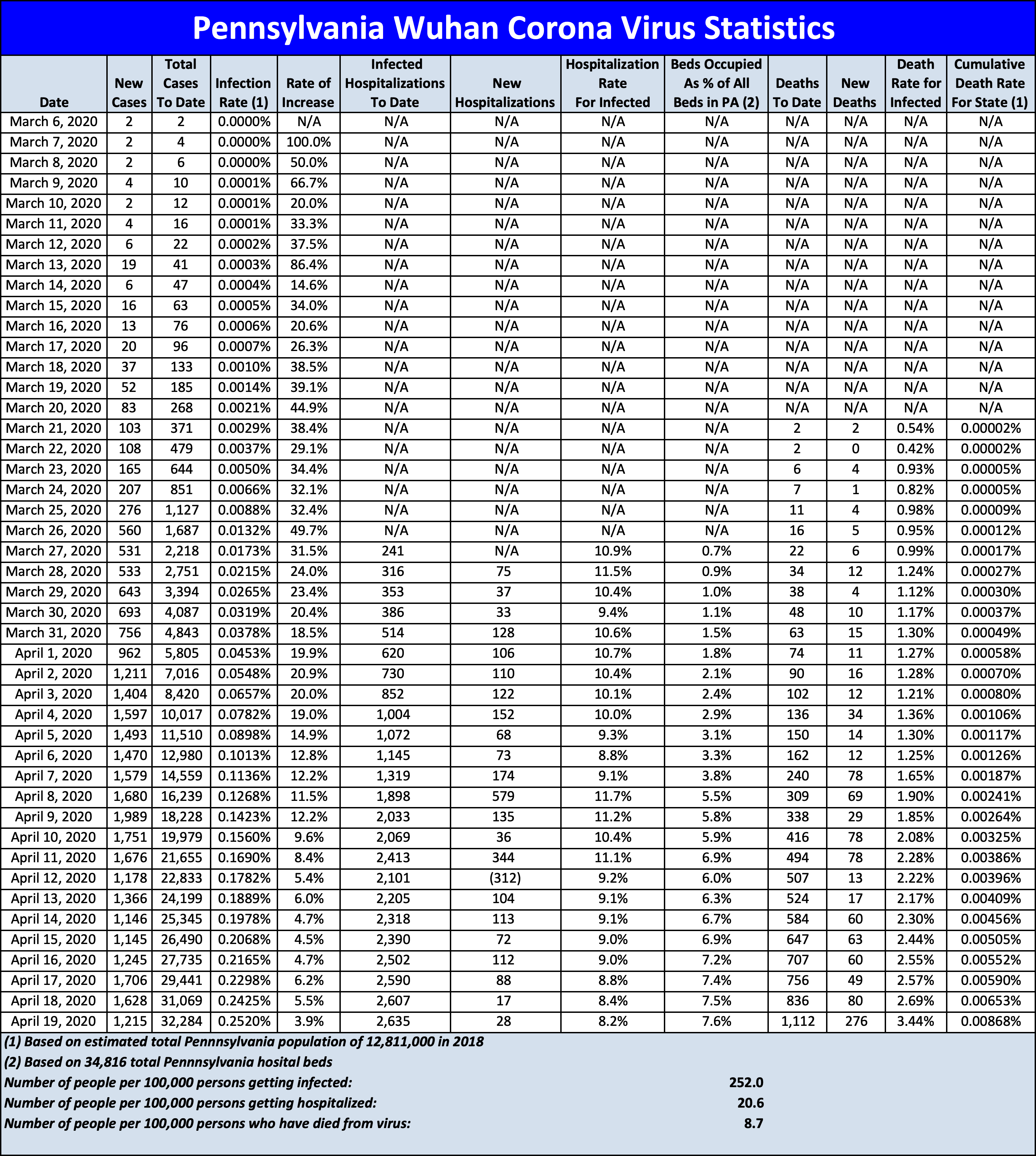 And, here is how new infections per day plot out:

When I did the table yesterday, I added a few columns and noticed something unusual. The number of hospitalizations to date went down by 312 on April 12, which was impossible unless there was a correction. Going back there had been an inexplicable 44% one-day jump of 579 hospitalizations four days earlier and it was apparently corrected on April 12. These adjustments indicate some very sloppy reporting or a change in methods of counting.

Today, it got far worse as Philadelphia County reported a staggering 104 deaths in one day. This was after zero new deaths yesterday and two new deaths on Friday in the City of Brotherly Love. This dramatically effected the statewide numbers as well and one wonders if this didn’t have something to do with the fact Governor Wolf is enjoying his little run at WuFlu tyranny. Could it be he wants an excuse to extend the economic cram down a bit further than May 1st?

Whatever Tom “Trust-funder” Wolf is doing, we know Philadelphia is even worse. It has a Mayor who did a jig upon turning the font of our own liberty into a sanctuary city and a district attorney who hates both law and police. Would his administration decide on Friday to hold back the numbers so they could recalculate to their advantage in raiding the Federal treasury? You betcha. That’s how city politics works. And, even giving Philadelphia the benefit of the doubt, it still comes off as dreadfully incompetent.

What this tells us is that we’re being played big-time by either Governor Wolf and/or the City of Philadelphia and it’s everyday Pennsylvanians who are paying the price for this extend WuFlu tyranny and it demands an investigation by the legislature. With that in mind, here are the key points from today’s data:

So, what we have is a completely unjustified WuFlu tyranny that is now being bucked up with new found cases as Governor Wolf tries in vain to extend his little adventure in totalitarianism, just like his buddy from the other side of the river. Meanwhile, there’s this:

On Monday, April, 20th at noon thousands of citizens, led by ReOpen PA, End The Lockdown PA and Pennsylvanians Against Excessive Quarantine, will come together to peacefully protest against lockdown restrictions continuing beyond May 1.

1 thought on “This Terrible WuFlu Tyranny Must Be Thwarted”