The U.S. Supreme Court just whacked pipeline opponents with a huge dose of common sense regarding the Atlantic Coast Pipeline and buried them 650′ down.

The Supreme Court just stepped into a ridiculous dispute advanced by NRDC types in a futile effort to halt the c. The 7-2 decision was authored by Justice Clarence Thomas, one of my heroes, who calmly and cooly dispenses with the nonsense arguments of the pipeline opponents. Those opponents had argued the National Park Service, because it administers the Appalachian Trail, could stand in the way of a Forest Service permit issued to allow the Atlantic Coast Pipeline to cross 650 feet below with zero impact on the trail itself. That didn’t fly.

What I especially like about the opinion by Thomas is his use of these examples, after pointing out the Forest Service legally owns the land and the Park Service but administers what is effectively but an easement or right-of-way over it (emphasis added):

If analyzed as a right-of-way between two private land owners, determining whether any land had been transferred would be simple. If a rancher granted a neighbor an easement across his land for a horse trail, no one would think that the rancher had conveyed ownership over that land. Nor would anyone think that the rancher had ceded his own right to use his land in other ways, including by running a water line underneath the trail that connects to his house. He could, however, make the easement grantee responsible for administering the easement apart from the land. Likewise, when a company obtains a right-of-way to lay a segment of pipeline through a private owner’s land, no one would think that the company had obtained ownership over the land through which the pipeline passes.

Both examples resonate with common sense, but the second has the additional virtue of turning the pipeline opponents’ arguments back on themselves. It is sheer nonsense to suppose the land 650 feet below a footpath cannot be used for something else by the actual owner, which is the Forest Service, not the National Park Service. Moreover, Thomas points out this:

The Trails Act states that the Secretary of the Interior (and by delegation the National Park Service) shall “administe[r]” the Trail “primarily as a footpath.” 16 U. S. C. §1244(a)(1). The Secretary is charged with designating Trail uses, providing Trail markers, and establishing interpretative and informational sites “to present information to the public about the [T]rail.” §1246(c). He also has the authority to pass regulations governing Trail protection and good conduct and can regulate the “protection, management, development, and administration” of the Trail. §1246(i). Though the Trails Act states that the responsible agency shall “provide for” the maintenance of the Trail, §1246(h)(1) (emphasis added), it is the Forest Service that performs the necessary physical work. As the Government explained at oral argument (and as respondents did not dispute), “[i]f a tree falls on forest lands over the trail, it’s theForest Service that’s responsible for it. You don’t call the nine [National] Park Service employees at Harpers Ferry [in West Virginia] and ask them to come out and fix the tree.”

So, the whole pitch from Atlantic Coast Pipeline opponents was nothing more than a ruse offered up by the Sierra Club and some stand-ins (Cowpasture River Preservation Association, Highlanders for Responsible Development, Shenandoah Valley Battlefields Foundation, Shenandoah ValleyNetwork, Virginia Wilderness Committee, and Wild Virginia). We can also assume, from their post-decision commentary, the NRDC was probably in the background as well.

Imagine the implications if the mere designation of administrative authority for a trail could be used to stop any pipeline from tunneling 650 feet below it. There are thousands of miles of trails administered by public agencies in this country. And, here is the reality from an Atlantic Coast Pipeline newsletter: 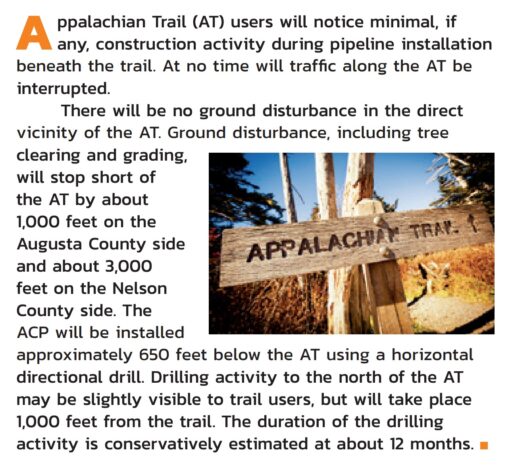 If the National Park Service could stop a pipeline 650 below that has zero impact on the trail itself based on a footpath easement, we would be in serious trouble, not only practically speaking, but also legally.

This is in many ways, in fact, similar to another issue that may end up having to be resolved by the Supreme Court; the case in New Jersey where the state claims a farmland protection easement gives it authority to halt pipeline right-of-way acquisitions over the farmers’ lands even though the latter might well welcome it for revenue reasons, knowing it won’t interfere with farming.

Read what Justice Thomas has to say—the whole thing. You’ll find it quite easy to follow and appreciate his wisdom. He just whacked the Sierra club and friends and buried them 650 feet down.