The juvenile world of Alexandria Ocasio-Cortez or AOC, as she has styled herself for clickbait purposes, is strictly one of “do as I say, not as I do.”

“Verboten” according to Merriam-Webster:

There is no more apt description of the juvenile attitude adopted by AOC, in her recent kitchen video, toward any thought others might have to disagree with any aspect of her views. That is verboten. You, as opposed to the “we” she loves to use as “the boss” of things, have no right to disagree on the problem, the solution or even the timing of what you must do under her orders. She’s a natural born totalitarian, like every teenager, including the ones who, like her, never grow up. And, like all juveniles, consistency never enters her mind.

Everything wrong with AOC the Congresswoman and her attitude on debate may be found in a selfie video she made in her kitchen. Before clicking to play it, though, take a look in the lower right corner at what’s in the background. It’s a gas range. She’s apparently putting whatever she’s making into a bowl for later cooking on the gas range behind her. 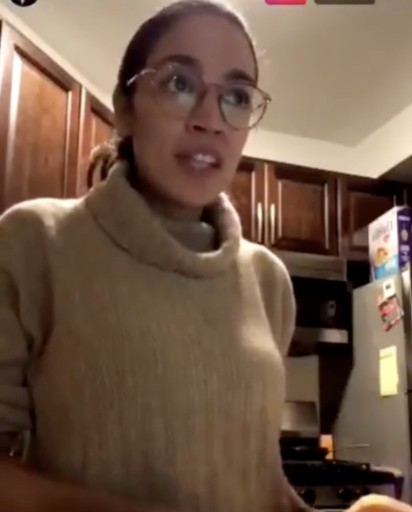 That’s the reality. And, think about the world AOC occupies right now. I admire her ability to grab the limelight in a town full of folks who’d run down their mothers to get to a camera, but the talk is all pure nonsense. It’s completely devoid of fact and logic, of course, but she doesn’t even get the emotion and imagination part correct. That would require at least tad bit of vulnerability, some admission she might not know literally everything, that she was willing to talk and “can’t we just just all get along” positioning. But, there’s none of that. Debate is verboten. So speaketh many a child.

Meanwhile, she lives in an apartment somewhere in the unreal part of America known as Washington, DC. It’s an apartment, no doubt, in a building made of cement and steel, two products impossible to make without fossil fuels. She not only has a gas range, but very likely, a gas water heater. She uses plastics, wears plastic rimmed glasses, and lives in a city where 96% of the residential heat comes from natural gas or electricity made from gas. She drinks wine, the fermentation of which creates CO2. She goes to work in Capitol buildings heated with natural gas. She travels and even trains require gas or oil when you down to it.

A grown-up would acknowledge these things, exchange views and search for common ground. A child simply demands. The beauty of the AOC arrival on the scene, though, is that she reveals so much that is wrong with the entire debate over global warming; not that we shouldn’t talk about it and craft reasonable responses, but that too many don’t want to talk about it. They only wish to demand everyone else accept their view, their solutions and their sense of urgency, which is nothing more than a demand they be put in charge.

And, the more someone like that gets in my face, the less credibility they and their cause have. That’s where we are and we can thank AOC for bringing things to a head so all can see and choose who to believe and what to do. For me, one answer we should all be able to agree upon is natural gas, which has the advantage of lowering all kinds of emissions and still allowing modern life, such as that which AOC lives, to continue.

8 thoughts on “The Juvenile World of AOC, Where Debate Is Verboten”