The government response to the WuFlu in this nation’s most urban states—those without significant rural balance—is a major civil liberties implosion.

Nothing has better illustrated the failure of government in general than the response of various urban states to the WuFlu debacle. And, with the riots in many of those same states over a dreadful injustice with which they are only connected as an excuse, we’re seeing an implosion of civil liberties such as we’ve not since Woodrow Wilson was President and used World war I as an excuse. The two issues combined and in quick succession, in fact, may be setting us back to pre-revolutionary times. Urban state governors are destroying civil liberties at a frantic pace and there is not nearly enough pushback, which suggests we are no longer a free people even in mind and spirit.

What has this to do with natural gas? Everything; if government can steal your right to travel, your right to do business and your right to assemble, while making you wear a mask that may be more unhealthy than not wearing one, then it can steal not only your mineral rights but everything you have. It can tell you not only what heat to use, but whether you shall get any. It can make you pay for the most bizarre uneconomical forms of energy for the sake of rewarding green government rent seekers and appeasing anarchists who simply want to turn the world upside down for the sheer schadenfreude of it.

What’s been happening of late, though, has also, strangely, yielded some new friends, including, in my case, at least one committed fractivist. I don’t wish to embarrass that individual through association with me, but it turns out we have the same view of the government WuFlu response; that it is a horrendous violation of our civil liberties as Americans. We have exchanged thoughts and agreed on what must happen but doesn’t seem to be; massive resistance to the tyranny that’s been imposed on us all. We are united in our frustration with a public exhibiting a case of Stockholm Syndrome and sympathies for the captors and destroyers of our civil liberties. 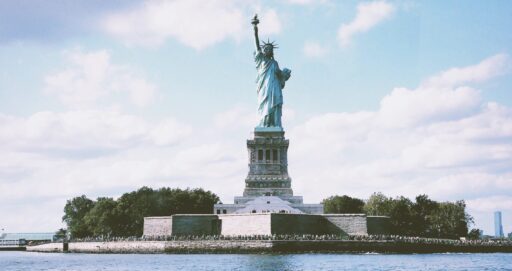 The civil liberties guaranteed by this lady are under constant threat and no more than today under the WuFlu and anarchists rioting throughout America.

If you don’t think our civil liberties are methodically being destroyed, think again:

We have been treated to a heavy dose of totalitarianism as the very same governors and their big city mayors in many instances have stood back and let anarchists invade our communities and riot over an obvious injustice with which they have connection other than as an excuse. So, the black businessman who invested his life savings in a sports bar has to watch it be destroyed by those acting in his name to orchestrate a riot over the actions of some cops virtually everyone in the country already agrees must be held accountable. Consider Tom Wolf’s wink and nod to the anarchists:

This was written as stores were being looted on Chestnut Street in Philadelphia, City Hall was facing riots and 45 minutes before like-minded crackpot Mayor Jim Kenney was driven to enact a curfew to stop the violence; yet another loss of liberty. So much for appeasement. Real protesters were essentially drowned out by the anarchists. And, who is behind them? Well, the usual suspects, of course. Hollywood types such as Chrissy Teigen, who, incredibly enough, stars in “Chrissy’s Court,” a courtroom reality television show. She says she’ll bail out “protesters.” But, they’re also getting support from politicians such as Wolf and Andrew “Currupto” Cuomo.

Someone is, of course, also paying the organizers and, no doubt, we’ll learn later who that is, but we can easily guess from past experience and it’s likely to include rich folks who paid for some of those pipeline “protests.” (More here.) The irony is that the true believers solicited to do the dirty work on behalf of the funders suppose they’re exercising their civil liberties when, in fact, they have been recruited for the exact opposite purpose. It is to create enough turmoil to force change in government toward a more totalitarian form with the funders in the driver’s seat.

This brings us full circle back to what the WuFlu has been all about; that forever implacable feature of human nature that may be described simply as the desire of a few to impose their will on others. It’s in all of us but, somewhere along the line, most of us learn or own freedom and liberty depend upon us controlling ourselves. That is the essence of the paradox that there is no liberty without law. Anarchy, by contrast, is the fast car to tyranny.

We need law to protect our rights, but we must simultaneously ensure it is not applied to remove them unnecessarily, which is what is happening with the WuFlu overreaction and will happen if rioters get their way. Our Constitution is written to limit government and those who are manipulating the WuFlu and Minneapolis events are both seeking to impose new vastly more oppressive government. Our civil liberties are at stake and, indeed, they always are.