There was a ludicrous anti-gas protest at Southpointe Business Park the other day. Thank the Warren Buffet family and other funders of the Tides Foundation.

Hey, it’s Thanksgiving break, woo hoo! Time for brainwashed college kids to break the law and claim they’re doing their civic duty by shutting down traffic in front of “evil” companies that are part of the Marcellus industry. A lawless mob of perhaps two dozen mal-educated young people along with some old hippies (most of whom were from out-of-state, i.e. paid agitators) set up roadblocks and other elaborate structures in front of the Southpointe business park in Washington County, Pennsylvania, near Pittsburgh. 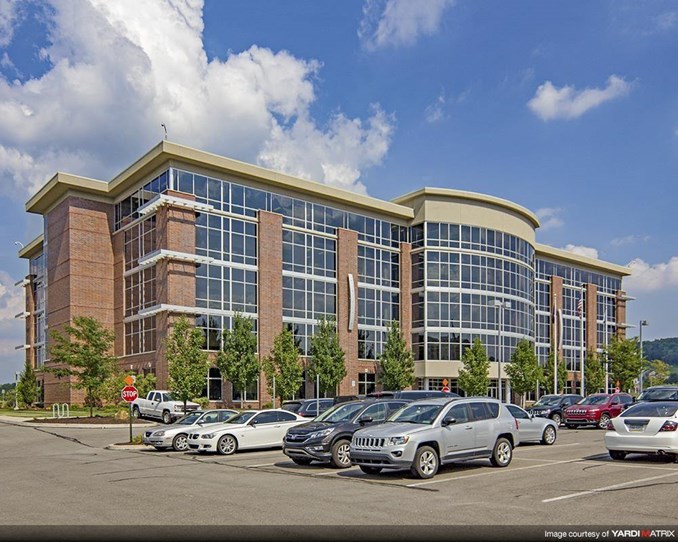 Yeah, totally nutso. The lawlessness went on for about four hours before local police finally ejected the last of the nutters. They had a chance to make their statement and disrupt legitimate, salary-paying and valued businesses for a while, all in the name of anarchy and mob rule–driven by abject hatred. We often wonder if this is how it felt during the rise of the Nazi Party in the 1920s.


From the Washington Observer-Reporter:

Chanting “You can’t drink oil, keep it in the soil” and carrying signs including “Not welcome in our communities,” more than 100 environmental advocates marched through Southpointe Monday morning to express their opposition to energy companies with corporate headquarters there.

“We’re here to send the message that what they do has been affecting our communities on a daily basis,” said Veronica Coptis, a Greene County resident and spokeswoman for Rising Tide North America, an organization that put together the protest. They were demonstrating against environmental harm they said is occurring from drilling and mining.

“Our safety is put on the line by decisions made in these headquarters,” Coptis added. “They will experience for one day what we feel every day.”

On a chilly, windswept morning, the demonstration began about 6:30 a.m. in the mixed-use Cecil Township park and disrupted traffic flow for part of the morning. Protesters early on blocked traffic at the intersection of Southpointe Boulevard and Technology Drive by setting up two tall tripod structures, with two people sitting near the top and three in chairs on the ground. The bottom three were tethered to one another, with the person on each end chained to the tripods.

The two near the top were arrested by Cecil police and charged with disorderly conduct and obstruction of highways. Patrick James Young, 34, of Pittsburgh’s North Hills, and Ashley K. Funk, 23, of Mt. Pleasant, Westmoreland County, were each released on $5,000 unsecured bond and face a preliminary hearing 9:30 a.m. Dec. 21 before District Judge Traci L. McDonald.

Protesters initially formed two groups, with about 20 stationed near the tripods. The others met farther up Technology Drive before beginning to march. All merged as the walk progressed around Town Center.

They were a diverse throng, from British Columbia to Nova Scotia in Canada, and from a number of states. Their chants also included “We’re going to fight back” and “Clean water is a human right,” their signs bearing “Fracking poisons air and water” and “We’re protecting” certain states including Oregon, Ohio and Maryland.

Marchers stopped on the sidewalk above Consol Energy’s headquarters, where Sarah Martik of Center for Coalfield Justice spoke through a megaphone.

“We want to send a strong message to Consol and any company that threatens our clean air and water,” said Martik, who grew up in Daisytown.

A “No more” chant followed.

Consol Energy officials could not be reached for comment. The Marcellus Shale Coalition, a trade group representing gas and oil companies and their supply chain partners, did weigh in on the protest. Spokeswoman Erica Clayton Wright said in a statement:

“Clean, abundant American natural gas is an absolute winner for our environment, our economy and our nation’s security. Our industry is proud to safely produce the affordable energy that Pennsylvanians need.

“ It’s sad and unfortunate that some radical anti-energy protestors would rather spread inflammatory claims and try to disrupt Pennsylvanians hard at work than accept well-understood facts and science. This extremism is dangerous and doesn’t reflect Pennsylvania values.”

You can also read how one of the demented supporters “reported” it on the Common Dreams and here’s a pic sent it to us by a MDN reader who works at the Southpointe business park: 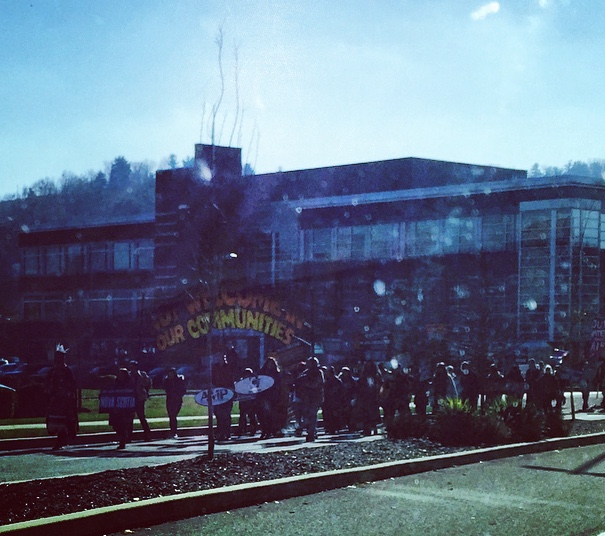 Editor’s Note: The Marcellus Shale Coalition properly called this protest out for what it is—extremism. Worse, it’s extremism funded by the Warren Buffett family and other like-minded trust-funders and corporatists. I explained who’s really behind Rising Tide North America in this July post. The Levinson Foundation and the Tides Foundation are among the funders.

Tides is a money-laundering outfit that gets its money from others who desire a degree or two of separation when they fund nefarious activities. The single largest contributor to Tides in 2013 was the NoVo Foundation, a creation of Peter and Jennifer Buffett, Warren’s son and daughter-in-law who, like all guilt-ridden trust-funders, are compelled to assuage it by becoming social justice warriors with daddy’s money. Warren, of course, has additional interests, like stopping pipelines that compete with his trains.

Warren Buffett is, in fact, the epitome of the corporatist who makes money by cutting deals with government, using the estate tax as a weapon to scarf up smaller companies, ingratiating himself with his erstwhile enemies through support of their initiatives and surreptitiously funding dirty tricks like this one against his competitors. He’s also positioned to be a big beneficiary of coal, which is always threatened by natural gas. So, when you want to charge someone for the cost of that Southpointe protest (police, lost business, etc.) send the invoice to Warren Buffet.