The renewables industry is one big bubble sustained by subsidies and false hopes, the charge, ironically, that renewables advocates direct at natural gas.

Two recent articles articulate why so much of the renewables industry is one huge financial bubble and scam and only prospers at the expense of other ratepayers and taxpayers, forever distorting the market that has kept our energy costs low and contributed to major environmental gains. Renewables benefit by direct subsidies, indirect subsidies and false hopes epitomized by European models those countries are now trying to get out from under. 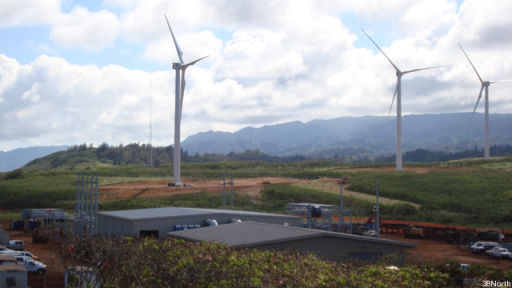 The first article appears on the Brave New Climate website and is entitled “The Catch-22 of Energy Storage.” John Morgan, an Adjunct Professor in the School of Electrical and Computer Engineering at RMIT, holds a PhD in Physical Chemistry, and is involved in developing “smart grid and grid scale energy storage technologies.” He provides some fascinating perspectives on the subject of energy storage, which, of course, is the elusive Holy Grail for a renewables industry that can supplement but never replace on-demand energy sources such as natural gas due its inability to supply what’s needed when the sun doesn’t shine and the wind doesn’t blow. Don’t worry, be happy, we’re told; economical battery storage is just around the next corner, except that it isn’t.

Morgan explains why in terms of the energy returned on energy invested (EROI). No energy investment is warranted where the energy return is less than breakeven (e.g., the energy needed for large fish to catch small fish as food cannot exceed the energy gained or there’s no future for either sized fish). it’s not a simple matter, because tremendous energy is often required to accomplish anything, much of it taken for granted. A highly organized society, for example, is demanded to support most energy development. Morgan explains:

An energy system must produce a surplus large enough to sustain things like food production, hospitals, and universities to train the engineers to build the plant, transport, construction, and all the elements of the civilization in which it is embedded.

Other researchers have, for this reason, determined an EROI factor of 7:1 is needed in highly developed economies such as our own for an energy source to be worth pursuing. Here’s how typical energy sources stack up, the blue columns being the EROI factor before storage costs are considered and the yellow cross-hatched columns represent the EROI factors with storage as part of the equation (“CCGT” is closed-cycle gas turbine): 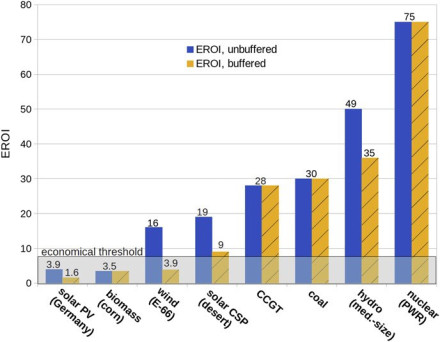 Notice solar PV, biomass and wind don’t pass the test and concentrated solar power (CSP) is marginal at best. The only renewables industry sector that makes sense is hydro-electric power and unless we have millions of acres of open space to flood (not to mention the will to overcome environmental objections), as in the case of Ontario, that’s not much of an option today in the Northeast at least. Coal also carries obvious environmental burdens and nuclear energy, though it makes much sense, is all but heresy anywhere in the Western world outside of France. What’s left is natural gas, of course.

Why is storage such a problem? Morgan explains:

If we were to store energy in, say, batteries, we must invest energy in mining the materials and manufacturing those batteries.  So a larger energy investment is required, and the [EROI] consequently drops…

…The [EROI] of solar PV with pumped hydro storage drops to 1.6, barely above breakeven, and with battery storage is likely in energy deficit.

This is a rather unsettling conclusion if we are looking to renewable energy for a transition to a low carbon energy system: we cannot use energy storage to overcome the variability of solar and wind power.

In particular, we can’t use batteries or chemical energy storage systems, as they would lead to much worse figures…

Another study by a group at Stanford is more optimistic, ruling out storage for most forms of solar, but suggesting it is viable for wind.  However, this viability is judged only on achieving an energy surplus, not sustaining society, and excludes the round trip energy losses in storage, finite cycle life, and the energetic cost of replacement of storage.  Were these included, wind would certainly fall below the sustainability threshold…

This is not a question of inadequate storage capacity – we can’t just buy or make more storage to make it work.  It’s not a question of energy losses during charge and discharge, or the number of cycles a battery can deliver.  We can’t look to new materials or technological advances, because the limits at the leading edge are those of earthmoving and civil engineering.  The problem can’t be addressed through market support mechanisms, carbon pricing, or cost reductions.  This is a fundamental energetic limit that will likely only shift if we find less materially intensive methods for dam construction.

This is not to say wind and solar have no role to play.  They can expand within a fossil fuel system, reducing overall emissions….We could, perhaps, build out a generation of solar and wind and storage at high penetration.  But we would be doing so on an endowment of fossil fuel net energy, which is not sustainable.  Without storage, we could smooth out variability by building redundant generator capacity over large distances.  But the additional infrastructure also forces the [EROI] down to unviable levels.  The best way to think about wind and solar is that they can reduce the emissions of fossil fuels, but they cannot eliminate them.  They offer mitigation, but not replacement.

Read the entire article if you’re interested in delving into the detail, but Morgan persuasively demonstrates what has been obvious from the beginning, the renewables industry is dependent upon other energy sources and natural gas is the best option. It allows renewables to supplement the system and can sustain their growth and development, but the idea they can replace it is a completely false hope.

This brings us to the second article, which demonstrates why subsidizing such false hopes makes no sense whatsoever and dangerously distorts the entire market, threatening the very foundations of our energy system. Entitled “Wind and Solar Have Destroyed the Ability of the Market to Signal Price,” this piece in the UK’s Telegraph gets at the problem Europe now faces as politically correct bias in favor of the renewables industry has undermined the ability of the system to produce anything without subsidies, thereby ensuring inefficient energy generation across the board unless things change. The article focuses on a recent report by Energy UK (electric lobby) demanding more subsidies for wind and solar (emphasis added):

Weather-dependent wind and solar power is inherently unreliable and high cost. In addition to subsidies, wind and solar need more grid infrastructure. When the wind blows and the sun shines, they swamp the grid with zero marginal cost electricity, forcing gas, coal and nuclear to reduce their output.

Lower prices and lower output demolish the investment case for building the gas-fired power stations the Government says are vital. These hidden costs are the real killer. As Amber Rudd, the energy and climate secretary, observed in her “smell the coffee speech” last November, “we now have an electricity system where no form of power generation, not even gas-fired power stations, can be built without government intervention”.

Advocates of wind and solar claim falling costs mean renewables will soon reach “grid parity.” Anyone who knows anything about electricity understands this is highly misleading…

While the Government insulates wind and solar investors from the damaging effect their output has on the market, the report admits that wind and solar have destroyed the ability of the wholesale market to provide price signals to guide investment decisions. It envisages more wind and solar on the grid, leading to more electricity priced as garbage that consumers are forced to pay someone else to take away during periods of negative prices.

…Without cheap electrical storage, wind and solar can’t keep the lights on. The report foresees storage as the “single most important technological breakthrough” likely in the next 15 years. One thing’s for sure. It hasn’t happened yet….

Thanks to government policies deliberately distorting the market, we have over-invested in wind and solar. It has blighted investment in reliable capacity that can keep the lights on. This is the crux of Britain’s energy crunch. Clearly it was a colossal mistake to have embarked on renewables with storage unsolved.

…In a world awash with hydrocarbons, Britain has an increasing shortage of generating capacity. There is no shortage of energy in the world. Oil prices have been falling. Last month, the US started exporting natural gas for the first time. In the first decade of electricity privatization, around half Britain’s generating capacity was renewed. The market worked.

Now that the market has been destroyed, the real choice is between finding a path back to the market or accepting the Government is running the show. Private ownership and state control is the worst of all worlds. Political risk is borne by the private sector, which in turn means higher electricity bills.

Renewable industry subsidies in the form of direct and indirect financial help as well as renewables power mandates have been slowly doing the same here in the US and, if want to see the future, we have only to look to Europe to witness the UK’s problems, the exploding cost of Germany’s Energiewende. It is increasingly recognized as an economic disastrous policy. Fortunately, many states here are waking up to the cost of the hidden subsidies, which is why they are repealing the mandates, the tax credits and all that before it capsizes their energy systems. The result; renewables industry rock stars such as SolarCity suddenly decide they no longer want to do business in those states. That and these two stories tell us all we need to know. The renewables industry is living in a bubble on borrowed time; borrowed from our fossil fuels endowment of energy. The future is natural gas unless we want to be Europe and we don’t.

5 thoughts on “The Renewables Industry: The Biggest Bubble”