Following the ignominious departure of the very dark environmental warrior, John Quigley, Pennsylvania’s Department of Environmental Protection (DEP) has been led by Patrick McDonnell, a much more even tempered and less ideological individual. DEP is still DEP, though, and the boss at the top, Tom Wolf, is as problematic as ever.

Despite this, McDonnell handles himself well and did a reasonably good job answering questions from the House Appropriations Committee last week. The administrative state he supervises has a mind and direction of its own, so it was refreshing to see so many questions (13 in all) put to him about DEP regulation of natural gas. It’s difficult to imagine such a discussion in New York where the legislature is little more than a room full of clapping seals for a governor who micromanages their DEC.

Readers can see the whole hearing (all 2.5 hours worth, including introductions) on PCN. Be forewarned, though, these hearings are exercises in tedium. Pennsylvania has the largest full-time legislature in the nation and everyone has to say something, of course. Patrick McDonnell comes across as forthright in response as House members did ask a number of good questions. Still, they missed some. 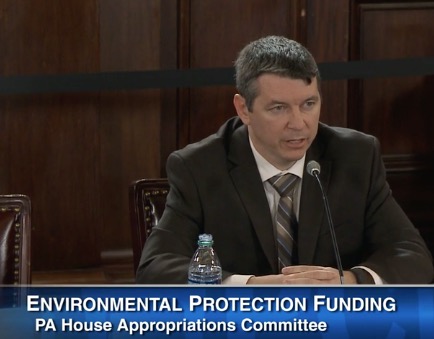 Democrat Minority Chair Joseph Markosek from Allegheny County asked (at 13:39) where DEP stood with respect to pipelines and whether it had resources to ensure safe construction of this infrastructure. McDonnell noted DEP’s role was primarily one of regulating wetland crossings and erosion and sedimentation. As simple as that truthful statement may be, it stands in stark contrast to how New York State views such responsibilities; as an opportunity to try to kill critical projects such as the Constitution Pipeline (which starts in Pennsylvania). DEP is also creating new procedures for linear project permitting to ensure efficiency, as New York State seemingly does the opposite.

Rep. Jeff Pyle, Republican from Armstrong, Butler and Indiana Counties, started off his questioning at 38:46 with a pithy observation about DEP finding an endangered “lorax” in Philadelphia. He suggested DEP do what it does every time something endangered is found in his neighborhood of Southwest Pennsylvania and shut everything down. That set the tone as Pyle proceeded to point out DEP seemed to take 200 days to do its pipeline permitting in Southwest PA and 14 days everywhere else. McDonnell blamed it on regional variations in permitting processes, lack of resources and technology and poor training, essentially admitting to Pyle’s charges.

The regional inconsistencies with DEP enforcement have been a huge long-standing problem, of course, and McDonnell is hardly the first to acknowledge it or promise to do something about it, but the administrative state always comes out on top and nothing changes, which accounts for Pyle’s frustration. He was not about to accept DEP excuses. He noted the importance of the Shell Cracker in Beaver County and rhetorically questioned why, when there were three DEP offices in close proximity, it was still taking six times as long to process erosion and sedimentation permits as it should based on other regions. 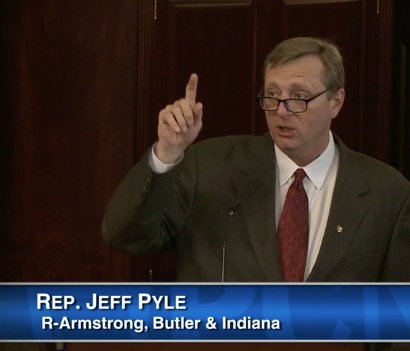 Pyle was on his game as he punched through the facade of smooth talk that too often counts for dialogue in these settings. He continued to do so by asking about a DEP air quality study begun in 2012, promised in 2014 and yet to be delivered. McDonnell danced on that one a bit, going back to the Shell cracker and noting he thought they now had most of the permits needed. He was, in the end, fairly straightforward, though, and promised Pyle an answer later after he investigated.

Delays in permitting were an issue with multiple legislators. Representative Jason Ortitay, Republican of Allegheny and Washington Counties, too, at 55:45 asked why it took 200 days to process erosion and sedimentation permits that are supposed to be acted upon in 14 days per DEP’s own rules and take 30-45 days in other regions. He reiterated long-standing complaints: DEP staff try to re-engineer projects, they impose personal preferences and requirements outside of regulations and they uniquely delay approvals in ways that neither Ohio nor West Virginia do.

McDonnell blamed incomplete applications in some cases (an all too common bureaucratic excuse) but also indicated a desire for more communication with applicants by staff and a need for more staff training. It’s hard to argue with either response but, once again, these are hardly new matters and lower-level DEP staffers have exhibited little desire to cooperate. Indeed, they often directly undermine leadership to substitute their own policies. Such is the DEP administrative state.

The one encouraging thing is that McDonnell seemed to recognize a phone call is often a better response than a rejection or a back and forth written debate over an incomplete application. I couldn’t agree more, based on my own experience. There are far too many cases where DEP has returned applications to start over when there were only trivial deficiencies that could have been easily resolved.

There were several others who also addressed permit delays and still other questions about the Clean Power Plan (now on hold in the Commonwealth). Representative Seth Grove, from Tom Wolf’s home county of York, also, at 1:51:15, made excellent points about the lack of pipeline infrastructure costing jobs in Pennsylvania due to lower than necessary gas prices. He stated the burden of Pennsylvania’s prospective severance tax combined with other taxes and over-regulation was squashing the Commonwealth’s growth and opportunity.

Finally, Republican Representative Brad Roae of Crawford and Erie Counties bluntly asked, at 2:00:13, where DEP got the authority to regulate methane from natural gas production. McDonnell cited Federal authority passed through to the state. Roae got him to admit, however, that Pennsylvania might be exceeding Federal standards – a perpetual problem with the Department as compared to other states. 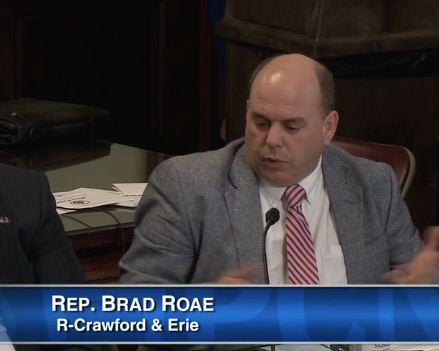 Roae also effectively exposed how DEP extends authority through general permits that are technically not regulations per se. It was a good lesson in how the administrative state works and extends its authority outside of normal channels. Watch this segment to understand how DEP staff twists and turns, what are supposed to be fair processes, toward its agenda.

All in all, McDonnell is, obviously, a capable fellow and contrary to his predecessor, is less an advocate than an administrator, which is a good thing, but the hearing tells us an awful lot about an agency that could be a whole lot better. Does McDonnell have the ability to knock heads or stand up to fractivists and radicals who suppose it’s their agency? Perhaps, but somehow, given who he ultimately works for, I doubt there’ll be a great deal of change. He is a distinct improvement over John Quigley, though, and that is something for which we can all be grateful.

There are some questions that should have been asked and weren’t, though. First, as a resident of Wayne County, the only part of Pennsylvania with gas that can’t develop it because the Delaware River Basin Commission (DRBC) has, for seven years, refused to issue permits or pass regulations for natural gas development, I want to know why Pennsylvania is giving the agency one damned dime of support.

Secondly, I’d like to know why Pennsylvania, as the predominant member of both the Susquehanna River Basin Commission (SRBC) and DRBC, is tacitly cooperating in the nonfeasance of office by the latter. Why is DEP participating in a scam? Why shouldn’t the regulatory framework of the SRBC, employed to great success in dealing with natural gas development in that region while maintaining water quality, also be applied to the DRBC? Is DEP scared of New Yorkers and extremists such as the Delaware Riverkeeper, or is it captive to their funder, the William Penn  Foundation?

Perhaps the Senate Appropriations Committee will ask those questions on March 9 at 9:00 AM when DEP appears before it.