Prince Cuomo, is the most fitting of many monikers for the man we’ve called at various times Hamlet, Macbeth and Gov. Corruptocrat. He’s pure Machiavellian.

A few days ago, one of my friends with whom I often share daily tidbits of news sent me a recent story on Andrew Cuomo. Inside this story was a link to another that appeared in the Chicago Business Journal back in October. Written by Peter DeMarco, it brought so many things together so many things about a man I’ve watched closely over the last seven years — Andrew Cuomo.

I first thought of Andrew Cuomo as a rather ordinary political snake, expecting him to slither his way through the weeds and ultimately approve fracking in New York after showing his constituents he was going to do it differently and better than all the others. As time progressed and he refused to decide, I saw him as a junior Hamlet on the Hudson, tormented by the potential political consequences and unwillingly to take action. Still later, he looked more like Macbeth or a modern-day crime boss. As the corruption became more obvious, I decided Governor Corruptocrat was an appropriate name for the man.

Reading the Chicago Business Journal article entitled “How a leader’s philosophy directly affects an organization’s culture,” brought it all into clearer focus. Andrew Cuomo is simply Prince Cuomo: a Machiavellian true believer in his own power — his monarchy. 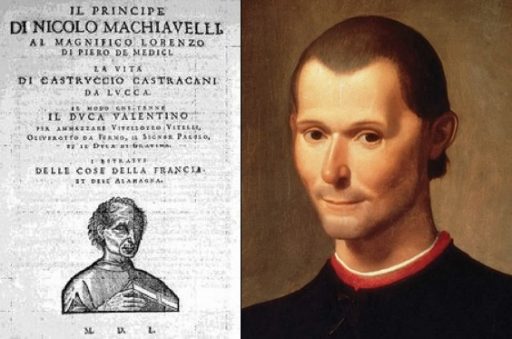 Machiavelli and his famous book – The Prince

Sharing some perspectives on this with my friend, we got into a comparison of the Mario and Andrew father and son duo with our Pennsylvania version vis-a-vis Bob Casey, Sr. and Bob Casey, the younger. He asked if I saw any parallels. I said “yes” with two important caveats; Mario Cuomo was no Bob Casey and Andrew Cuomo was vile, whereas Bob Casey, Jr. was merely an incompetent boob. Casey the elder was, in my judgment, Pennsylvania’s best elected governor in my lifetime, showing great courage in taking on his own party over principle. Mario, by contrast, exuded the appearance of principle while selling out. Casey, Jr. has emulated Mario while accomplishing nothing, but Andrew has accomplished much, none of it good. This because Andrew Cuomo is Prince Cuomo in the fullest Machiavellian sense of the phrase.

Peter DeMarco’s article put’s it all in perspective. Here’s a few excerpts:

In 2007, I was invited to the office of the Secretary of Housing and Urban Development (HUD) in Washington, D.C. to propose a team-building plan. During my interviews, a senior official gave me a history of the leadership at HUD, including the previous administration run by then-Secretary Andrew Cuomo. Apparently, one of Cuomo’s first acts after taking over as Secretary of HUD in 1997 was to distribute the book by Niccolò Machiavelli, The Prince, to his key aides and senior staffers, telling them: “This is my leadership philosophy.”

You may recall that Machiavelli advanced some dubious ethical principles, including “the ends justify the means” and “it is better to be feared than loved.” The essence of leadership, according to Machiavelli, was the ability to consolidate and maintain power, as opposed to the ability to achieve organizational excellence.

In pursuit of this power, Machiavelli promoted calculated deceit. He advised leaders to know when to do good and when to do evil, yet always appear to do good.

This same emphasis on appearances permeates the culture of the Cuomo administration. Despite his promise to run the most transparent administration in New York history, Cuomo and his staff are notoriously opaque. The email trailis closely guarded. Cuomo rarely volunteers specific information about his programs and dealings to the public and his back-room deal style is the foundation for many of his administration’s accomplishments.

Language is just a tool for exercising power in Machiavelli’s philosophy. Words become mere instruments for achieving one’s own purposes rather than conveying authentic meaning or objective reality. This explains how aides so close to Cuomo — a leader notorious for his micromanagement of the important issues — could successfully act against his anti-corruption narrative.

“Calculated deceit” perfectly captures the essence of Andrew Cuomo and his administration. I read “The Prince” many years ago. It’s essentially a “how to” manual for a monarchy in the days when many kings and princes met their end at the hands of their would be successors. Intrigue, deception and corruption were at the heart of all things. They were, moreover, justified in the name of the common good. Some would say little has changed other than the fact that in western countries, at least, aspiring leaders rely upon politics rather than murder to advance. They are, though, especially in Andrew Cuomo’s case, particularly dirty politics, combined with a whole lot of corruption.

Every decision Prince Cuomo has made with respect to natural gas is Machiavellian when you really analyze it. It is his own peculiar brand of “calculated deceit” that has been brought to bear to convince urban New Yorkers who want to believe their heat magically comes from the thermostat that natural gas isn’t needed even as the state uses ever more of the stuff. It is his superb practice of the Machiavellian technique that allows him to outsource New York’s energy production while proclaiming he’s doing the opposite and making it a model of sustainability. Prince Cuomo, unlike Bob Casey, Jr., is anything but incompetent. Rather, he’s an accomplished Prince Cuomo. It will take someone like him to beat him. I’m thinking Preet Bharara may be that sort of man.

Meanwhile, we all need to get a lot smarter about the way we go about beating Andrew Cuomo by making him live up to his own words, especially with respect to issues such as carbon emissions and sustainability (clue: covering Upstate New York with windmills and solar panels isn’t sustainable). None of what he’s proposed will make a dime’s worth of difference in those respects compared to natural gas. Just take a look at the chart below showing real CO2 emissions drops in new York State that began with the shale revolution. CO2 emissions declined substantially as natural gas delivered to consumers went up. That’s why we spend a fair amount of time here talking about those issues and I suggest readers do the same. Prince Cuomo is a formidable enemy. 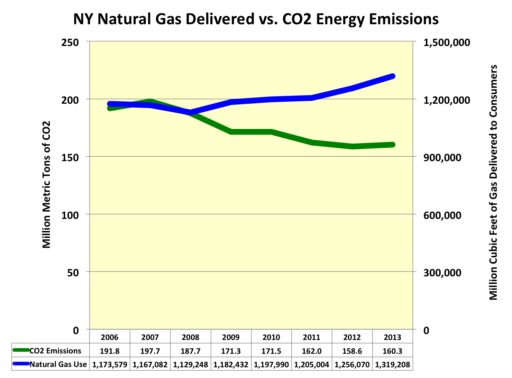