According to Newsday, a politically correct news organ if there ever was one, Andrew Cuomo and National Grid have agreed to lift the Long Island moratorium on natural gas hookups. One unfamiliar with the Machiavellian ways of Governor Corruptocrat could be forgiven for wondering who blinked. Skilled New York political observers, though, will see through the whole thing. Indeed, the fact both Newsday and the ever green New York Times are crafting the story to make one wonder tells us exactly who won this one.

Andrew Cuomo is a character right out of Shakespeare, but it was Machiavelli who anticipated him. Consider these quotes from the latter (emphasis added):

“Everyone admits how praiseworthy it is in a prince to keep his word, and to behave with integrity rather than cunning. Nevertheless our experience has been that those princes who have done great things have considered keeping their word of little account, and have known how to beguile men’s minds by shrewdness and cunning. In the end these princes have overcome those who have relied on keeping their word.”

“Occasionally words must serve to veil the facts. But let this happen in such a way that no one become aware of it; or, if it should be noticed, excuses must be at hand to be produced immediately.”

“It is necessary to know how to conceal this characteristic well, and to be a great pretender and dissembler. Men are so simple, and so subject to prone to be won over by necessities, that a deceiver will always find someone who is willing to be deceived.”

“Men judge generally more by the eye than by the hand, because everybody can see you, but few can come close enough to touch you.”

Pretty revealing words, aren’t they? Now, having read them, consider what Cuomo is saying about the last minute deal:

National Grid on Monday agreed to lift a crippling moratorium on new gas hookups and pay a $36 million fine after negotiations with Gov. Andrew M. Cuomo through the weekend in a move that rescinds, for now, the governor’s threat to revoke the company’s state operating certificate, while also addressing short- and long-term supply constraints…

Cuomo in a statement called the deal a “victory for customers,” saying the company will present options to its long-term supply shortage to customers in Brooklyn, Queens and Long Island to let them choose the best way forward for their communities. The agreement calls for at least four public hearings on those options, including one each in Suffolk and Nassau.

“Today it was made clear that we will not allow any business — big or small — to extort New Yorkers in order to advance its own interests,” Cuomo said…

In an interview, Cuomo said companies such as National Grid have taken the concept of “too big to fail” to the state’s utility sector under the belief they would not have their franchise yanked, but took it to the “farthest extreme.”

“They gave us no choice” but to act, he said, after denying service and “leaving 3,000 people out in the cold,” while stopping local development with “no plan B to this pipeline.”

It’s a message Cuomo said will carry beyond National Grid.

“I think it sends an industrywide message to these utilities: This is an assertion of the peoples’ power. This is how utilities have been operating for years and with this agreement, the people of New York are back in charge.”

This brings us to Queen Gertrude, a character from Shakespeare’s Hamlet. She was Hamlet’s mother and her husband had just been murdered. Her son attempts to learn who killed the King but putting on a play about it. Queen Gertrude watches the woman playing her and realizes she’s overacting and potentially giving up the game. She tells Hamlet “the lady doth protest too much, methinks.” 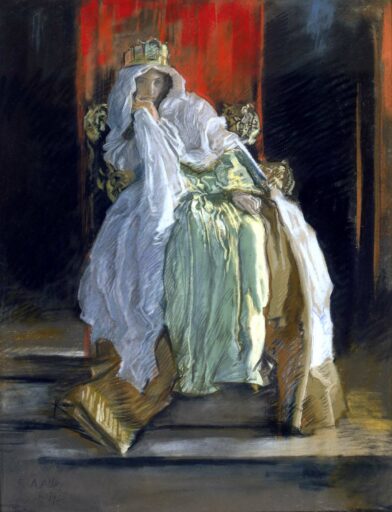 Methinks Cuomo doth protest too much?

Take a close look at what Cuomo says and ask yourself if these bombastic statements aren’t another case of someone saying too much and being too determined to veil the facts and pretend he’s won. Does a real winner need to go to such lengths to proclaim it? No, the first rule of winning is to say nothing  and let the facts speak for themselves. Cuomo is doing the opposite. He’s the great deceiver and pretender. He was caught with his pants down and needed to end the moratorium more than the international firm National Grid needed this troublesome franchise.

Everything about the deal, in fact, is simply several coats of paint of various colors intended to mislead those willing to be deceived. Doubt me? Well, pay attention to the exact words used in these paragraphs from the story:

National Grid declared the systemwide moratorium in May, after the state Department of Environmental Conservation for the second time denied a water-quality permit sought by the company’s construction partner, the Williams Co., to set the pipeline under 24 miles of New York waterways. The DEC said the work would disturb toxic sediment and cause environmental impacts, but gave Williams until next year to reapply and address those concerns.

The administration official said the gas pipeline, which still requires “independent approval” by the DEC, should not be considered an inevitable option from the review. “We think it’s one option,” the official said. “We wanted to go back and present other options.”

…The PSC, according to the administration official, has been “undergoing a soul searching on how it can do better” since Cuomo’s letter. “This is a complicated problem. The solution is not an easy one,” the official said.

Get that? It’s complicated and not easy, and we need to present other options but no one should think a pipeline is inevitable. That’s political speak for not having any real choice but to approve the pipeline and simply practicing to deceive those willing to believe Cuomo gives a damn about anything other than getting out of this mess while protecting his green credentials. The villains will be the heretofore subservient, but now suddenly and usefully “independent,” DEC and the hacks at the PUC who are doing what they’re told and wearing their scarlet letters.

11 thoughts on “National Grid and Cuomo Settle Moratorium; Who Blinked?”