A state that consumes as much natural gas as the Empire State does, ought to be producing more New York natural gas. That it doesn’t is a terrible shame.

New York State should support natural gas development and the fact the state hasn’t moved ahead with fracking is inexplicable giving how much natural gas we consume. New York State as a whole, in fact, consumes enormous amounts of energy each year. Yet, we take no action to develop the resource, when we have it right under our feet. It’s one of the most frustrating things imaginable, part of living in over-taxed, under-developed and under-water Upstate New York.

Let’s look at what our New York State energy consumption a few different ways.  What are the sources of our energy?  Well, according to the Energy Information Administration (EIA), it’s mostly natural gas that keeps us warm, even if it’s not New York natural gas: 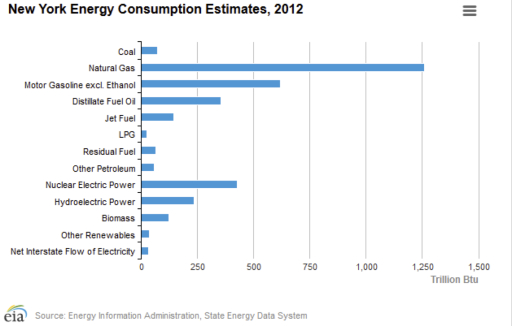 Does it surprise you that natural gas is leading the way or that it is virtually twice as utilized as the next leading energy source (another fossil fuel by the way)? 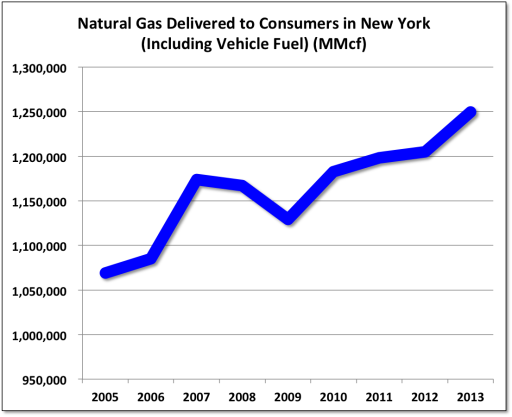 Many of our friends from the other side will argue we can quickly and easily move away from natural gas and switch to renewables.  I think it’s clear based on this chart, decreasing our state’s use of natural gas hasn’t worked as well as anticipated in the past, which is why we see major increases in natural gas beginning in 2005.

There are reasons. Natural gas is cost effective and clean burning.  New York State was, according to the EIA, the eight largest energy consumer among the states and, in 2013, it had the fourth highest average electricity bill in the country.  Natural gas could help lower these because it is generally more cost effective than the alternatives, largely due to the increasing role of shale gas in the mix, as the following chart illustrates: 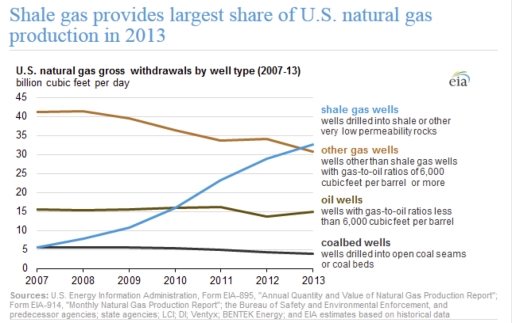 Natural gas demand increased in the past week in the Northeast due to the cold temperatures that moved in.  Here in New York we are certainly no strangers to this weather, but many people protesting natural gas forget how much they enjoy the luxury of having it on days like today.

A study conducted in 2012 for New York City by ICF shows just how cost effective shale gas development really is.  It has the lowest cost and the highest production opportunities. 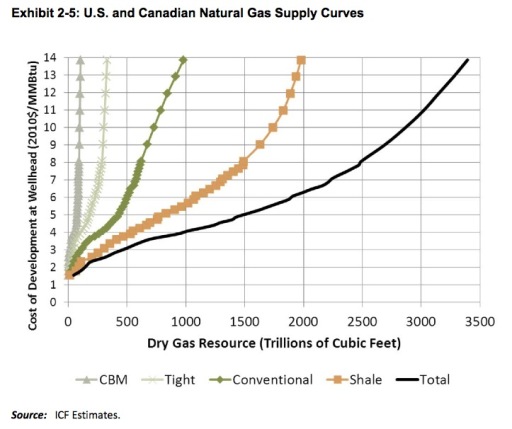 Here are some ICF’s observations:

Exhibit 2-5 presents the gas supply curves for the ICF Base Case. The gas supply curves show the incremental cost of developing different types of gas resource, as well as for the resource base in total. Shale gas, tight gas, and coal bed methane are collectively referred to as “unconventional” gas resources…Based on our analysis of the resource base and drilling costs, ICF has estimated that there is 1,500 Tcf of gas in the U.S. and Canada that can be developed at a wellhead cost of $5 per million British thermal units (MMBtu) or less. Of that 1,500 Tcf that can be developed at $5/MMBtu or less, about 800 Tcf is shale gas…The market growth that we project places upward pressure on gas prices. However, since there is so much resource available at relatively low prices, gas prices are only expected to grow modestly. ICF projects U.S. and Canada gas production to grow from about 27 Tcf in 2010 to over 38 Tcf by 2030, an average annual growth rate of 1.7 percent per year (Exhibit 2-6). All of this growth is anticipated to come from unconventional production while conventional onshore production is expected to decline by about two Tcf, and offshore production in the Gulf of Mexico is expected to remain at current levels…Overall, unconventional gas production, dominated by shale, will become the base source of natural gas for the United States. Many of the conventional supplies will become the marginal sources of gas supply in the future.

Prices, in other words, control supplies and vice-versa, meaning consumers always benefit either by enjoying low prices at the time or stimulating development of more supply that will lower prices in the future. The solution to high prices is always high prices, as it is with any commodity business, and they ensure we have huge reserves of natural gas going forward, which means we ought to be developing our New York natural gas now.

ICF also noted how much more gas we in the Northeast are likely to use natural use in the future:

In the ICF Base Case, total gas consumption within the Northeast is projected to grow from about 3.9 Tcf in 2010 to 5.3 Tcf in 2030 (Exhibit 3-1). This is a growth rate of about 1.6 percent per year, which is similar to the growth rate for the entire U.S. and Canadian gas market. Of this total growth, almost 75 percent is attributable to the power sector from the expanded use of natural gas-fired generating facilities. 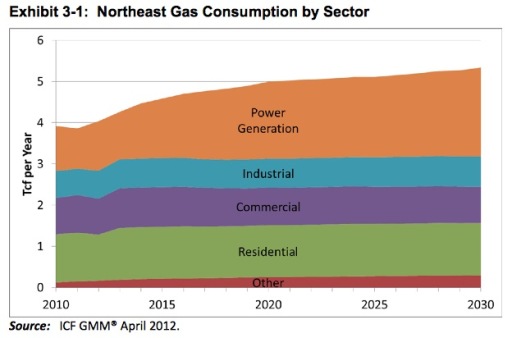 It is beyond clear that not only is New York a heavy consumer of natural gas, but it is also likely to remain one for decades.  Yet, we let everyone else develop it while consuming large quantities and simultaneously prevent Upstate New York from lifting itself up out of poverty by producing New York natural gas.  This is madness.  It is time to step up to the plate and develop our New York natural gas now.