David Crea
Process, Energy & Reliability Engineer, Watkins Glen, NY
(David Crea is employed by US Salt but speaks here for himself only)

Gas Free Seneca, opponent of propane storage in the Watkins Glen area, portrays itself as “Little Red Riding Hood” in a battle with “The Big Bad Wolf,” but it’s just the opposite.


Crestwood Midstream (then Inergy Midstream) purchased the plant and lands of U.S. Salt, LLC in 2008, and it became a wholly-owned subsidiary. US Salt owned a salt plant in Watkins Glen, New York on the west side of Seneca Lake, one of the Finger lakes, which had been existence for many decades. The facilities also included a brinefield.

Inergy Midstream began the process of designing and permitting a new Liquefied Petroleum Gas  (LPG) storage facility to be sited in the brine field. LPG can consist of propane (3 carbon atoms) and/or butane (4 carbon atoms). It has become controversial due to a group known as Gas Free Seneca (GFS), an Ithaca based and Park Foundation/Rockefeller funded group that sprang-up in 2010 to supposedly perform “public education” but whose real agenda was purely political; to stop the project.

More Than Just Holes in the Ground

The salt plant was acquired not only for the value of the salt operation itself, but also for the added value connected with the mined-out cavities down in the salt-layer. Indeed, as a midstream energy company asset, the salt plant is definitely out of place, unless you understand the value of those “holes in the ground” – the mined-out cavities, some of which have further usefulness for storage of hydrocarbons.

Some of these cavities are quite large.  The 5.1 million barrel cavity slated to hold 1.5 million barrels of propane has equivalent volume to a horizontal tank 250 feet diameter and 580 feet long.  You just can’t build large pressure-vessels like that on the surface, unless you refrigerate the whole mass to reduce vapor-pressure. Conversely, the cavity slated for butane has only 800,000 barrels of capacity, and is on the “small” side.

There is no danger of the cavities collapsing because of the hundreds of feet of non-porous, competent cap-rock.  Plus the cavities remain under constant pressure, either from the head of liquid in a well around 2,000 feet deep (for brine, that is 1,000 psi) when used for LPG storage, or from gas-pressure, when they are used for that commodity.  At the cavity-depth in this area, the typical ‘pressure-swing’ for storage is roughly 900 psi (400 psi = “empty” to 1300 psi = “full”).

The proposed LPG storage facility was to have 2.1 million barrels of capacity in two cavities, and an equal-volume brine pond at the surface to store the displaced brine.  The brine pond is necessary to hold brine as the storage facility goes through the seasonal storage/discharge cycles.

Propane is stored up in summer to be used for a winter heating fuel, and butane is stored in the summer to blend into ‘winter’ gasoline mixes, so your car will start when really cold outside.  The seasonal volumes to handle needs are quite large – “millions of barrels,” not something you just build a few more above-ground 30,000 gallon bullet tanks to hold.

Is it safe? Well, another facility owned by Crestwood, about 3 miles east of Savona, NY, has been in existence for 50 years in cavities that were mined-out long ago.  That facility has about 1.5 million barrels of capacity, and has both truck and railroad tanker transfer facilities.  Few people even know it exists – a tribute to how unobtrusive this kind of facility actually is.

Gas Free Seneca has tried to stir up concern over the Savona facility’s “industrialized” look. They have posted long-distance pictures of it as part of their “public education”.  Anyone who wants to see it for themselves can drive by on Eagle Valley Road and take their own look.  Alternatively, use Google Earth for the birds-eye view (see below).  From ground level, there is little to see, or hear, and most employees live within a few miles of the facility.  They definitely are not worried about it “blowing up,” as some Gas Free Seneca devotees desire you to imagine. 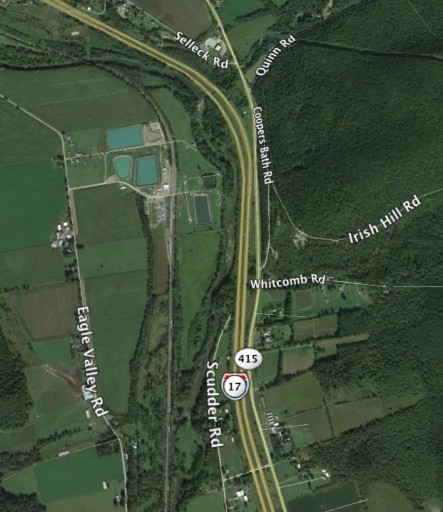 There is a shortage of LPG storage capacity in the Northeast US, and the proposed Watkins Glen facility is a natural market-response to that need for more capacity.  The notably colder winter of 2013-14 proved the need for it, as existing storage capacity emptied out about Christmas.  Enterprise’s pipeline through the area to Selkirk (near Albany) had inadequate capacity to fill the huge need driven by the cold winter, and massive trucking ensued to deliver propane north into the market-areas.  On NYS Route 14, there was a propane tanker coming from the south spaced about every 3 to 4 miles over the January-February period.  That is a LOT of truck-traffic, which should have been unnecessary.

This is a good place to note that in spite of the huge volume of trucks, there were no accidents, a tribute to the professionalism of that group of drivers.  No accidents, in fact, is the norm for these trucks.  And, their tank is probably the most-rugged pressure-vessel rolling down the highway.  They might roll-over and slide, but puncturing the shell is unlikely.

However, that trucking cost a lot, and propane went from about $2.30 to $5.20/gallon for users not under limiting contracts.  The total impact on the Northeast has been estimated at $100,000,000.  That is a waste and it’s a cost being imposed on businesses and homeowners by New York State’s delay in approval of the project Crestwood now proposes.

That cost was imposed because the efforts of Gas Free Seneca and cohorts have influenced Governor Cuomo to stop NYS DEC from issuing their Environmental Impact Statement.  This is after DEC thoroughly reviewed its technical aspects, dragging their feet over a period of two years to do this.  The decision on the EIS is now at the state’s “Executive Level,” meaning Cuomo himself, where it is apparently dead in the water until the election.

Meanwhile, Cuomo continues to exhort how he’s so much in favor of stimulating the depressed ‘upstate’ area (95% of NY) and promotes yogurt, while imposing higher propane costs on the region (and refusing to approve fracking that would open up new economic opportunities).

Think about it: That extra cost to consumers just last winter for propane is only part of the true impact of these groups emanating from Ithaca and disturbing the natural balance of the free market system.  If not tripped-up by the thacans’ obfuscation and non-profit foundation funded resistance, that market would have provided the storage three full years ago.  They seem to be working to assure no one has any profits.

But back to LPG storage.  The whole historical-story is complex, because a former salt plant owner, International Salt Company, rented two cavities to what was then TEPPCO  and now is Enterprise, whose pipeline runs by this area.  The maximum storage then (1964-1984) was up to 4.0 million barrels – about twice what the current proposal’s volume is.

However, TEPPCO and International Salt argued over cavity-rental or purchase-fees in 1982, and out of spite mined their own 1.2 million barrel cavity that they began using in 1984.  It is a cavity in rock at about 400 feet deep, sitting below the hillside just to the west of Route 14.  There is also a propane truck receiving/loading facility visible from Route 14, but the facility is “nearly invisible” to anyone driving-by, much like Crestwood’s proposed facility would be – nearly invisible to passers-by.

In 1994, the local gas and power utility NYSEG, needing natural gas storage capacity, spent about $90 million to build pipelines and a compressor station to use US Salt’s “Cavity 1” for gas storage.   Its gas capacity is listed as 1.5 billion cubic feet – small by industry standards.  That cavity was one of the two previously used for propane storage by TEPPCO.

Inergy, now Crestwood, subsequently bought that facility in 2012 to fit with their other area gas-storage facilities, “Stagecoach” near Owego, NY, “Steuben Gas” and “Thomas Corners” in the Bath, NY area.

Historically, the assessed valuation for real property tax purposes was based upon the original NYSEG capital cost.  Since the facility was purchased for less than NYSEG’s original cost, Inergy/Crestwood asked for a reassessment to the current purchase value, and have been flailed at ever since by Gas Free Seneca as if they were ‘stealing’ from the community.  WalMart did the same thing (obtained a lower reassessment) but has not been flailed by Gas Free Seneca, for engaging in what is recognized as simply reasonable business and property-tax practice.

The way Gas Free Seneca couches its spin, Crestwood is “stealing” from the local residents because of this. The reality is that Gas Free Seneca is reaching into the pockets of every single homeowner and business who uses propane and, therefore, it is the real thief. Members of the Gas Free Seneca leadership, in fact, are stealing from themselves because…get this…they use propane, but that will be addressed in subsequent parts of this story.

Well, that’s the background for this series; Part II tomorrow.