A recent report issued under the name of one of Gov. Cuomo’s health experts suggests the sort of conclusions his Health Department might make on hydraulic fracturing if it were ever allowed to release one. It’s junk science.

Back in November, 2012, when New York Governor Andrew Cuomo opted to use health issues as his excuse for not acting on hydraulic fracturing, a scam that continues 16 months later, his Health Commissioner, Nirvah Shah appointed three “experts” to study these issues. All three had already previously made inflammatory statements about hydraulic fracturing, as Energy In Depth noted in this post.

One of those individuals was John Adgate, from the Colorado School of Public Health, who is the lead author of a report that appeared last month in the Environmental, Science and Technology Journal. Available only by subscription, the inflammatory title of “Potential Public Health Hazards, Exposures and Health Effects from Unconventional Natural Gas Development,” gives the theme away. It appears this may be the report Adgate had prepared for Cuomo only to learn the Governor didn’t really want one, so he repackaged it and put it out as a teaser to attract some more funding for his department.  There are any number of anti-fracking foundations with deep pockets who could be attracted to do so.

Regardless of the motive for its release, the report certainly reveals the mentality of one of Cuomo’s health experts. His article is but a biased and sophist literature review combined with fractivist spin and a naked appeal for more money.

The report is authored by Adgate, Bernard Goldstein and Lisa McKensie. Adgate and McKenzie are both associated with the Colorado School of Public Health. Both have also already been associated with two highly flawed research reports intended to bash hydraulic fracturing; the Garfield County study from 2012 and a widely panned low birth weight study of a couple months ago. Both ended up being disavowed by Colorado state health officials.  Goldstein, a professor emeritus from the University of Pittsburgh, is little better. His bias is evident from this testimony he gave a couple of years ago in an apparent effort to raise research funds:

The … only cost-effective time … to make this investment is now rather than to wait until the inevitable clamor for such research when diseases begin to appear that are associated with natural gas drilling activities.

Goldstein has said he’s for developing natural gas but his assumption of conclusions while he has his hand out for money gives the game away, doesn’t it? 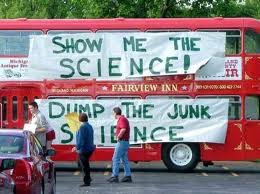 That it is a game and a piece of junk science as it applies to hydraulic fracturing is apparent not only from the mercenary fund-raising appeal at the end, but also the spin that is always put on the data assembled from the literature review. It starts with the abstract which ends with these words:

Despite broad public concern, no comprehensive population-based studies of the public health effects of UNG operations exist. Major uncertainties are the unknown frequency and duration of human exposure, future extent of development, potential emission control and mitigation strategies, and a paucity of baseline data to enable substantive before and after comparisons for affected populations and environmental media.

Overall, the current literature suggests that research needs to address these uncertainties before we can reasonably quantify the likelihood of occurrence or magnitude of adverse health effects associated with UNG production in workers and communities.

What this means, of course, is simply this: there is no hard data to suggest any particular negative health impacts from hydraulic fracturing or unconventional natural gas (UNG) development and they’d like some money to find some.

When in Doubt, Blame Hydraulic Fracturing

With any fossil fuel development, there is a potential for release of air and water pollutants, physical and public safety hazards, and a range of psychosocial stressors.

Really? And, there are no such “psychosocial stressors” with other forms of energy development? Perhaps the authors have never heard of shadow flicker (which can cause seizures), solar panel glare issues or the dangers of rare earth minerals (used in numerous renewable energy devices) mining (pictured below). This sort of not-so-subtle bias is everywhere throughout the report.

Though there are potentially mitigating factors, such as increased tax revenue or income for leaseholders, nearby residents may complain of odors, noise, light, or psychosocial stress from declining land values or decreased housing availability. The development of intracommunity differences in the perception of risk and rewards may also lead to stress in some residents.  Some local stressors may also be regional issues, such as water availability, ground level ozone, and water quality.

Three suppositions based on “mays” constitute peer-reviewed science? The word “may” appears, in fact, some 30 times in this report.  Here are a few other examples:

Chemical and nonchemical stressors found in and around UNG development sites may affect both workers and communities.

Workers also may be exposed to petroleum hydrocarbons, such as aromatics (e.g., benzene, toluene, ethyl benzene, and xylenes; hereafter BTEX) and aliphatic compounds during well development and production.

While workers may be exposed to a wide range of hazards during well development, residents and community members living, attending school and working adjacent to UNG development sites may experience many of the same chemical or physical exposures.

Increased truck traffic in residential areas raises the likelihood for traffic accidents and may decrease residents walking and exercising in areas of development.

While not extensively addressed in the peer-reviewed literature, industrial accidents and natural disasters involving well infrastructure and pipelines may put nearby residents at increased risk of exposure to fi res, explosions and hazardous chemicals, which is a concern in many communities.

In addition to traffic-related pollutants, people living near UNG development sites may be exposed to VOCs, silica, and other chemicals used during fracturing and well completion as well as fugitive emissions of VOCs from pipes and valves.

Natural gas development may be the primary source of ambient benzene concentrations in the Dallas Fort Worth Area and Garfield County, CO.

As a result, local social services, including the need to develop homeless shelters, may be strained. Community resilience, defined as the ability of a community to sustainably utilize available resources to withstand, respond to, and/or recover from adverse events, may be affected by UNG development, as was evident when social services were further strained by a major storm in central Pennsylvania in 2011.

This selection conveys the nature of the entire report; a collection of superficial assertions intended to raise alarm bells without accepting the burden of proof. It is also replete with excuses for not finding evidence hydraulic fracturing is a health problem. Consider this:

The existing scientific literature has limited information indicating that UNG development may contaminate domestic ground or surface water supplies for individuals or communities. Direct attribution of contamination from the fracturing process is hindered by lack of baseline data, the widespread presence of methane and petroleum byproducts in many gas-bearing basins, and nondisclosure agreements that limit the reporting of contamination after legal settlements.

Another study compared standardized incidence rates (SIRs) for childhood cancer in Pennsylvania counties, but found no difference in SIRs for all cancer types except central nervous system (CNS) tumors, which the authors attributed to a large number of excess tumors in counties with the fewest wells. The scientific validity of this ecological study is questionable because it chose before and after comparison periods that are not relevant to current concerns about UNG development.

What exactly is that supposed to mean? We reported on this study here and noted it compared figures for 1990 and 2009, the latter being well before, and the latter well after, the launch of the Marcellus Shale boom beginning in 2004. Interestingly, the authors were more than happy to quote this much criticized study of low birth weights that only looked at the much shorter period 2003-2010.

An Inherent Bias Against Hydraulic Fracturing

The rest of the report is filled with this sort of thing, indicating an inherent bias captured perhaps best in this statement:

In view of the broad social effects and the community divisiveness that has attended UNG development, health effects attributable to stress are not surprising and are consistent with previous studies of boomtowns. Many of the nonspecific symptoms associated with UNG development may reflect psychosocial stress. Contributing to this stress is a lack of trust and transparency concerning industry and government action. Ferrar et al. (2013) noted that those who believe their health has been affected report higher stress levels due to loss of trust and perceived lack of transparency.

Apparently, it hasn’t occurred to Adgate and company their activities and scaremongering might be the very thing causing folks to think there might be health problems associated with hydraulic fracturing. They have so compartmentalized everything, they are even able to rationalize hydraulic fracturing as the cause of a homeless shelter shortage, for crying out loud!

Stretching things to this degree arguably creates the “psycosocial stress” they bemoan by repeating unsubstantiated assertions and wrapping them in hyperbole about health effects where there is no causal data to connect them to hydraulic fracturing. Yes, one of the experts being used by Gov. Cuomo to evaluate health impacts from hydraulic fracturing may be one the biggest psychosocial stressors of all.  How ironic; how thoroughly departmental.