Minnesota taxpayers have, in the name of the arts, funded an enviro-terrorist video game named “Thunderbird Strike” built by a Michigan State faculty member.

“Thunderbird Strike,” a video game developed by a Michigan State University assistant professor, allows a player to fly over oil production facilities and earn points by “firing lightning at snakelike pipelines, trucks and other oil industry structures”… and presumably the employees working in or around them. 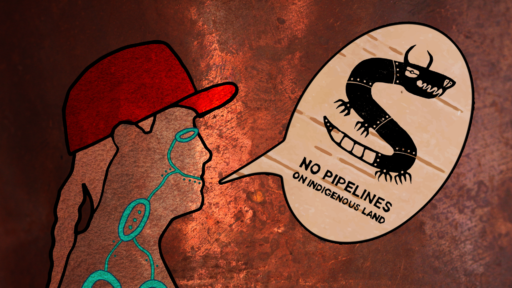 According to its website, the game is based on indigenous cultural figures called thunderbirds—“people who walked with lightning in their eyes”—who had the unfortunate habit of accidentally killing anyone they looked at.

The game has retasked these rather anti-social legends with an explicitly anti-oil purpose, flying over Canada and Michigan to destroy critical infrastructure. As a Vice.com blogger eerily explained, “Players can control a thunderbird that destroys as much of the oil industry’s machinery and pipelines as it possibly can. And it’s so satisfying.” 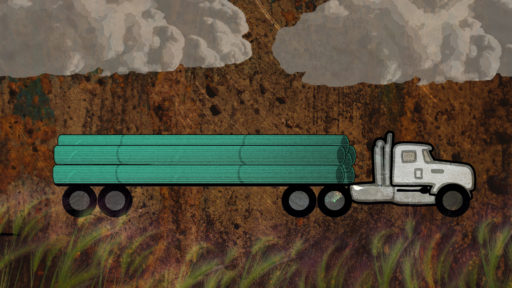 While the game’s creator, Elizabeth LaPensee, says “it’s optional whether or not you attack oil structures, or you focus on activating animals and people” (another feature of the game), she  has made the game as a way to “educate” against pipelines in general and the Enbridge Line 5 pipeline in particular.

Despite her protests, this game gives pop culture succor to the increasingly destructive nature of anti-pipeline protesters by implicitly encouraging activists to harm property—and people—associated with oil and natural gas.

Editor’s Note: The boldness of Elizabeth LaPensee in advocating for enviro-terrorist action against the Enbridge Line 5 pipeline and other oil and gas infrastructure is only matched by the stupidity and culpability of the Minnesota Legislature, the Minnesota State Arts Board, the Arrowhead Regional Arts Council and the McKnight Foundation, all of whom had a role in this travesty. LaPensee is only doing that which she can get away with, while the others have serious fiduciary responsibilities they have thrown to the wind, fleecing Minnesota taxpayers and making them partners in enviro-terrorist activity.

When I read Keep It Grounded In Fact’s post on this subject, my thoughts immediately went to the question of who funded Ms. LaPensee’s enviro-trerrorist video game. This is what she told an AP reporter:

The game’s website previously said it had been developed “in affiliation with” the university’s Games for Entertainment and Learning Lab. The wording was changed Wednesday night to read, “With gratitude to Michigan State University.”

LaPensee said in a phone interview she deleted the reference to the lab to clarify that she and collaborators had produced the game independently, not as a university project. She said she began working on it a year before joining the university’s Department of Media and Information in 2016 and did not use the lab’s equipment or funds. The Arrowhead Regional Arts Council in Duluth, Minnesota, provided a grant that covered some of the costs, she said.

“Thunderbird Strike” is intended as a work of art and a tool for educating people about how oil development has damaged the environment, LaPensee said.
“It certainly is not encouraging anyone to commit eco-terrorism,” she said, adding that people should play it before passing judgment.

While players can hurl lightning at oil equipment, they also can target people and animal figures with the purpose of bringing them to life, LaPensee said.

The double-talk employed by LaPensee is typical of the wink and nod behavior of those who sympathize with enviro-terrorist activity. The word parsing about the involvement of Michigan state University involvement is equally deceptive. What’s left out is the real story, though. The full description of funding from the Thunderbird Strike website is as follows:

With gratitude to Michigan State University.

Thunderbird Strike was developed through residencies including O k’inādās Residency, The Banff Musicians in Residence Program, and Territ-Aur(i)al Imprints Exchange thanks to the 2016 Artist Fellowship grant from the Arrowhead Regional Arts Council.

This activity is made possible in part by the voters of Minnesota through a grant from the Arrowhead Regional Arts Council, thanks to appropriations from The McKnight Foundation and the Minnesota State Legislature’s general and arts and cultural heritage funds.

Not only was Michigan State University involved, but it is acknowledged the voters of Minnesota and the McKnight Foundation paid the bills. The latter is another gentry class fractivist funding outfit that has opposed frac sand operations in Minnesota. The voters of Minnesota (taxpayers) refers to this grant made by the Minnesota State Arts Board through the Arrowhead Regional Arts Council from the Arts & Cultural Heritage Fund created by the state through voter initiative: 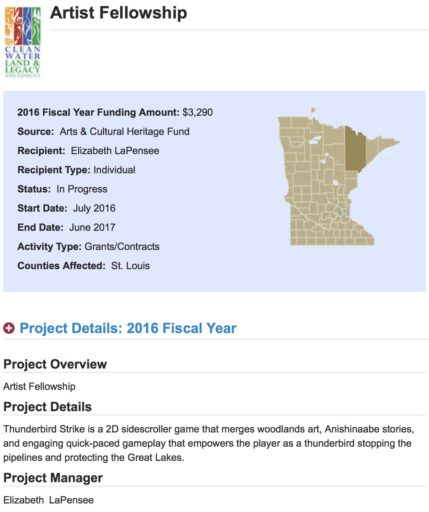 The saddest part of the story is this; the Minnesota officials charged with distributing this money, taken from Minnesota taxpayers, knew very well what they were funding. They didn’t care that the video game was anything but art or that it promoted enviro-terrorist activities. They just didn’t give a damn. I have to wonder how many Minnesota taxpayers knew they were going to be encouraging enviro-terrorist activity when they voted for funding of the “arts.” Not many, I’m sure.