Recently, Middlesex County, New Jersey, voted to ban fracking. The action was inconsequential as no one has any desire or reason to drill there anyway. It reveals the stunning hypocrisy and shallowness of urban Northeast politics which, in the end, matters not.

Middlesex County is located a short distance south of Newark, in the heart of the New York metro region.  It was home to 809,858 people in 2010, has a population density of over 2,600 persons per square mile and, geographically, is the population center of the most urban state in the nation.  There is a shale formation underneath it all, the Newark Formation, but there’s no place to put a well pad.  Therefore, the action of the County Freeholders to ban fracking was a completely symbolic act, a mere demonstration of intentions for the purpose of soothing very small and politically minds, which all that urban politics amounts to these days. Facts, logic and results play no role; only intentions matter.

Facts have a way of eventually catching up with politics grounded in emotion. Middlesex County politicians probably won’t pay any price for their craven action, but reality will intrude in a different way as Middlesex businesses and homeowners vote with their wallets and otherwise act in their own self-interests. Nothing about the freeholders’ action has changed the laws of economics or human nature, which is ultimately about enlightened self-interest.

Consider this chart, which plots how Middlesex County homeowners heated their homes at the time of the 2010 Census:

Some 233,395 or 82% of Middlesex’s homes were heated with natural gas, even higher than New Jersey as a whole, which is 74% (compared to 49.5% nationwide). Energy Information Administration data indicates 41% New Jersey electricity is also made with natural gas. Altogether, then, we can safely say 87% of Middlesex County’s householders rely upon natural gas in one form or another. Finally, given the role of shale gas, the size of the Marcellus Shale play and New Jersey’s proximity by pipeline to the Marcellus we also know that’s mostly fracked gas going into those homes.

Yet, the Middlesex County Freeholders moved to ban fracking in what everyone admits is nothing but a symbolic action. The debate was nothing less pitiful, as this article from last month demonstrates. Here is some of it (emphasis added):

Pittsburgh had found radioactivity in its drinking water from the fracking industry, he said. Other towns had fracking waste storage tanks explode, contaminating the local community.

Fracking would affect businesses in New Brunswick as well, he said.

“[It’s] actually destroying jobs,” he said. “It would hurt the development of natural resources such as the cutting-edge solar energy field. It would also hurt tourism, which is really important in northern New Jersey with camping and hiking.”

The extractive industry was boom-and-bust, he said. They would initially come in with investment money, but they would leave the community with environmental and economic problems.

Elliot Warren, citizen’s outreach director for Environment New Jersey, said Pennsylvania wastes 1.2 billion gallons of water per year because of fracking, he said. The material waste product of fracking has been proven to be radioactive.

Warren’s father was almost killed while inspecting a leaking fracking pipeline that exploded.

“These people are more concerned about their pocket than they are about the citizens of the state,” he said.

Craig Garcia, a worker for New Labor, an organization that aims to improve worker conditions, said he had talked with other members of his organization and found them concerned about the quality of water in the town.

“Even if this is mostly a symbolic measure, it would send out a good signal to the public,” he said.

After the freeholders passed this resolution, Food & Water Watch planned to help pass bans in other communities, the state and the country.

Caral Bellante, a Middlesex County freeholder, said she was definitely against fracking.

“I don’t think it’s good for the residents of Middlesex County… it appears to be dangerous,” she said.

Pretty bad, isn’t it? “Fracking waste storage tanks” that somehow explode and contaminate entire communities is perhaps the most infantile suggestion.  Every accusation made, in fact, is easily refuted with a few minutes of research. The entire discussion reveals a woefully (and willfully) ignorant group of activists, led by Food & Water Watch and the usual suspects. They essentially bullied the Freeholders into taking the bizarre position the natural gas county Middlesex County residents use in greater proportion than almost anywhere else is somehow “dangerous.”

This, of course, is the strategy of Food & Water Watch and other like minded pawns of elitist special interests; pounce on communities with no potential for fracking and get them to take meaningless positions against it to create a wave of opposition.  Food & Water Watch is a radical group that opposes nearly everything, including bottled water use and genetically modified crops. It is financed by “more than 25 Big Green foundations” to do this sort of thing all over the country. Among those foundations are the Park Foundation, which gave Food & Water Watch $250,000 in 2013, $290,000 in 2012 and $510,000 in previous years to gin up “local campaigns” against fracking and the like.

Meanwhile, Middlesex County is already served by hundreds of miles of “fracking pipeline” (depicted below) and distribution lines these professional protestors suggest are a threat: 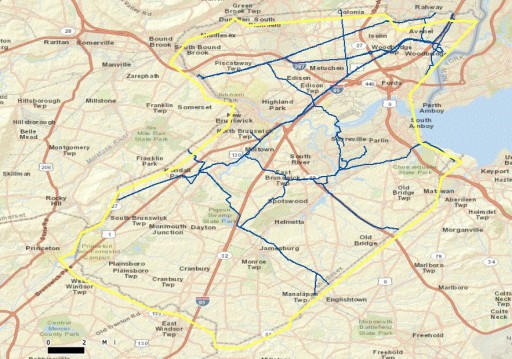 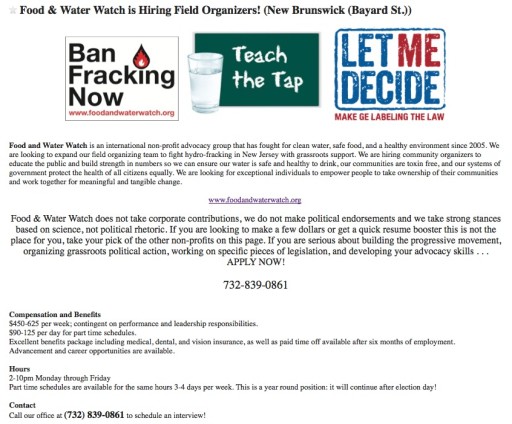 This is what the Middlesex County Board of Freeholders fell prey to in their mad rush to jump on the NIMBY bandwagon with nary a thought to the incredible hypocrisy of their actions. Still, it’s important to keep it all in perspective. This was nothing but a cheap little political stunt of no lasting meaning whatsoever. Why do I say that? Well, check out this post by my Energy In Depth colleague Steve Everley. There are no words (except “Happy Holidays”); just charts that tell the only story that matters. Here is the one for the Marcellus Shale that’s keeping those Freeholders warm this winter: 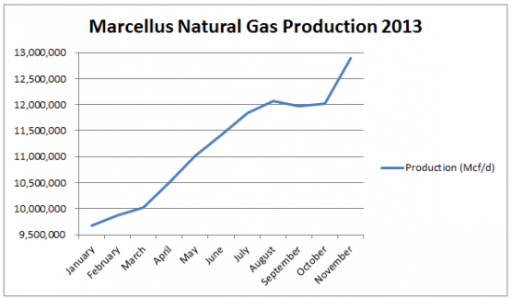 While the Freeholders sat there voting to ban the fracking keeping them warm they might have also considered what it was doing to save them money and clean their air (with multiple double-digit declines in carbon emissions for New Jersey power plants). They know all of this, of course, but they put it out of their minds to appease a vocal minority funded by outside interests, which is how urban politics is done these days, as spineless politicians far removed from the production of the resources on which they depend seemingly vote against their own interests.

The key to understanding this, however, is that they also know the vote doesn’t matter.  It was pure Northeast political theater and meanwhile CNG stations are being built in Middlesex County to further spread the benefits of fracking.  So, Food & Water Watch and the Middlesex County Board of Freeholders can play all the fundraising and political stunts they wish, but Middlesex County will be using more natural gas than ever, all due to fracking. What a country!