A phony group called the Mama Bear Brigade did a very weird Mariner East pipeline protest yesterday in the middle of a pandemic in still red Delaware County.

We love Waylon Jennings here at NaturalGasNOW. He and his Highwaymen pals did a beautiful rendering of “Mamas Don’t Let Your Babies Grow up to Be Cowboys.” The lyrics resonate with the authentic image of the cowboy:

Mamas, don’t let your babies grow up to be cowboys
Don’t let ’em pick guitars or drive them old trucks
Let ’em be doctors and lawyers and such…

But, there’s a group of supposed Mamas in Delaware County and environs known as the Mama Bear Brigade who resonate as green phonies. They staged an unusual protest of the Mariner East pipeline using vehicles and Zoom, with narration by organizer Luke Bauerlein, a paid shill for the usual suspects. They did so in the middle of a pandemic; in the county with the single worst COVID death rate in Pennsylvania!

Bear in mind Delaware County is also in the red phase with respect to Governor Wolf’s COVID “Stay at Home Order” and reopening plan, which explicitly states the following:

All individuals in counties subject to this policy must STAY AT HOME except for certain essential activities and work to provide life-sustaining business and government services.

That’s pretty understandable, but here is further clarification with respect to travel restrictions and what represents “allowable essential travel” under the order:

> Travel to care for elderly, minors, dependents, persons with disabilities, or other vulnerable
persons.

> Travel to or from educational institutions for purposes of receiving materials for distance learning, for receiving meals, and any other related services.

> Travel to return to a place of residence from an outside jurisdiction.

> Travel required for non-residents to return to their place of residence outside the commonwealth.

> Anyone performing life-sustaining travel does not need paperwork to prove the reason for travel.

See anything there about protests? No? Well, I don’t either. Yet, here is 57 minutes and 47 seconds of a narrated and fully documented protest by non-essential vehicular travel with little get-togethers of protesters along the way, apparently. All complemented by a fact-challenged narrative from home by hired organizer Luke Bauerlein, who wasn’t taking any chances with respect to his own health or of being reported by some snitch. Risk-taking is for the useful greenie idiots you see.

Bauerlein, of course, is a total phony, the instigator-in-chief for several groups he “manages,” which means he does the organizing for a fee and gets NIMBYs and gullible true believers to do the dirty work. Here is his the tiny band of trained seals gathering for the event: 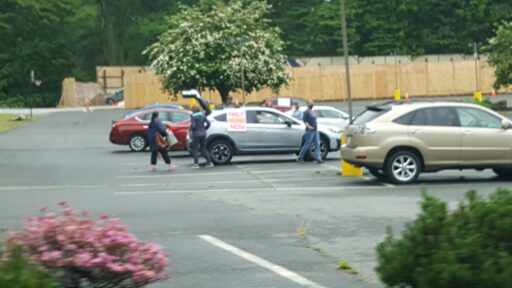 Unessential travel being organized as part of a protest violating Governor Wolf’s Stay at Home Order.

They were pretty open about it, in fact. They met at Duffer’s Tavern at 192 Middletown Road in Glen Mills and posted it on both Facebook and Twitter, calling it a “caravan protest.” Dare we call it a “Corona Caravan?”  And, are caravans risky? Well, yes, they are if you have 4-5 cars trying to follow each other. What if they  had an accident? That would have unnecessarily exposed first-responders to risk; first responders and emergency folks who rely on the products Mariner East makes. Indeed, American energy and the life-sustaining products it creates have never been more critical than they are today as our country confronts the global health-care crisis caused by the Corona virus.

And, then there is the hypocrisy; their reliance on fossil fuel transportation to protest fossil fuels. These are the same protesters who have challenged workers, called their work non-essential, and cautioned against them leaving their homes to work, but suddenly it is now just fine for these people to leave their homes to protest under the very same Stay at Home Order. I’d say “give us a break” but these folks wouldn’t be phased in the least by it. They’re robots performing a task on behalf of others, imagining it’s all pure and vital, while it’s anything but.

Some insights into how these phony groups are ginned up is provided by a recent article in the Delaware Valley Journal titled “California Green Group Dumps ‘Dark Money’ into Delaware Valley Elections” (emphasis added):

A California-based “dark money” group has dumped almost $200,000 into Pennsylvania elections as part of a strategy to use local races to advance its national green-energy agenda, Delaware Valley Journal has learned.

As a result, GAP is using its money to influence local races in hopes of achieving similar goals. “Unfortunately the Federal government is currently pursuing policies in the wrong direction,” reads a statement on the GAP website. “However, in many policy areas, progress is possible at the local and state level.”

…And because GAP is registered as a nonprofit, it doesn’t have to reveal the source of the funds it’s donating to these local Pennsylvania races — the main criteria for “dark money.”

Tens of thousands of dollars of that money has flowed to Pennsylvania, funneled through green groups like Conservation Voters of PA Victory Fund and Food & Water Watch….

Because Conservation Voters of PA had only $500 cash-on-hand at the beginning of the reporting period and accepted no other donations during that time, GAP is clearly the only source of funds for the campaign activities…

Independent expenditure committees (IEC) like Conservation Voters of PA can take unlimited donations and spend an unlimited amount advocating on behalf of a candidate. An IEC, however, cannot give directly to a candidate’s campaign committee and there are limits on coordination between the two…

In 2019, GAP represented just over 45 percent of Conservation Voters of PA’s total fundraising.

This interest in local Delaware Valley races by GAP and its affiliates is nothing new. In 2018, one of GAP’s founders, Michael Kieschnick, personally endorsed Chester County’s Danielle Friel-Otten and donated to her state house race. With the help of a $20,000 contribution from Conservation Voters of PA, Friel-Otten won an unexpected victory.

This year Friel-Otten is endorsed by the newly created IEC Food & Water Watch, which has received $48,000 from GAP.

So, we have some of the same folks (Steyer, Soros and company) involved. What a coincidence! And, Food and Water Watch is also involved in “car rallies” with Mama Bear Brigade during the pandemic! Who would have imagined so many of the same people are involved in the same things? Mariner East protests and political campaigns financed by special interests! Somebody seems to have a mission and is not letting something silly like a pandemic get in the way. And, especially coincidental is the fact one of the political campaigns financed by these special interests was that of Rep. Danielle Friel Otten. It’s curiouser and curiouser, isn’t it?

This brings back to the point of beginning; it’s not smart for Mamas to let their babies to grow up to be greenies, phonies or NIMBYs.

Mamas, don’t let your babies grow up to be greenies
Don’t let ’em pick flowers or wear them old duds
Let ’em be drillers and builders and such…

3 thoughts on “Mama Bear Brigade: Don’t Let Your Babies Grow Up to Be Greenies”