Extinction Rebellion is a climate extremist group focused principally on the UK. It suggests such extremism may be reaching peak lunacy levels, though.

The surprisingly successful Extinction Rebellion is running a con game on everyone, especially their own followers. Ostensibly the standard bearer of the “Keep It in the Ground” movement, Extinction Rebellion (XR) is actually on a mission to topple governments, destroy the global economy, and “replace representative democracy.” At least according to the architect of the XR movement, Roger Hallam. 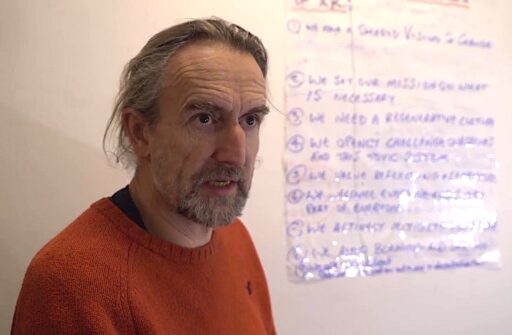 Julian Roger Hallam (click to watch a video of him)

Before he started getting mainstream media coverage, Hallam—a failed organic carrot farmer who “decided to take down the system because I didn’t like it very much”—was much more candid about his real ambition with XR. Following are five things he admitted about XR that he doesn’t want you to know.

XR WANTS TO OVERTHROW ALL GOVERNMENTS

“Name of the game, you’ve got to bring down all the regimes in the world, ideally simultaneously, and replace them.”

“The practical implementation happens by paralyzing major cities with masses of people. Disabling traffic for a sufficiently long period of time would result in food shortages. Once that happens the regime will fall.”

This should come as quite a surprise to the thousands of XR protester who were told the reason for shutting down traffic in London for nearly two weeks last April was to draw attention to the issue of climate change.

“Arguments about the need to ‘protect the economy,’ ignoring that the current economy is taking us over a cliff into collapse, simply cannot hold up. So, let’s be clear. A Climate Emergency is not a rhetorical call for accelerated climate action, it’s a call for a major transition of the economy. There is simply no other way to get the job done. … It will mean shutting down cities, shutting down companies and if necessary, shutting down parts of the economy.”

“We are going to force the governments to act. And if they don’t, we will bring them down and create a democracy fit for purpose. And yes, some may die in the process.”

Protesters should be ready to cause disruption through “personal sacrifice … You need about 400 to go to prison and you need two to three thousand people to get arrested … If necessary, they should be willing to die.”

“When a society reaches a point of extreme imbalance then only a revolutionary episode can be successful in reorienting it. This reorientation is concretized through a replacement of representative democracy … with a National Citizens’ Assembly.

“A key part of our strategy will be to sell the plan to a critical mass of the liberal elite ‘defectors’ as well as to the 1% of the general population who will lead the disruption.”

That would be the same “1%” who believe this movement is about the climate. But according to Stuart Basden, one of the original co-founders of Extinction Rebellion, it clearly isn’t.

“Extinction Rebellion isn’t about the climate. It’s not even about ‘climate justice.’ If we only talk about the climate, we’re missing the deeper problems plaguing our culture … It’s a call to the XR community to never say we’re a climate movement. Because we’re not. We’re a Rebellion.”

Editor’s Note: It’s easy to dismiss these lunatic groups but there are two reasons not to do so. First is the fact experience teaches today’s leading edge in culture and politics is tomorrow’s center if not confronted with the facts. Each wacky initiative produces a second wackier one until reason triumphs or things go completely to hell.

Second, groups such as Extinction Rebellion don’t just happen. They are enabled by special interests smart enough not to reveal too much of themselves. Whether those interests are hedge-fund investments in government financed renewables, “strategic parkification” for the sake of elitist playgrounds or ideological power trips, they routinely fund the radical version of their cause behind the scenes (e.g., the William Penn Foundation’s funding of the Delaware Riverkeeper). It helps to hide the real mission, after all.

Extinction Rebellion almost surely enjoys the benefit of such enablers. Try to find out who Roger Hallam really is, for example. You’ll find next to nothing other than the fact his real first name is Julian. Is Roger a professional protester? Or, as is far more likely, is he yet another wealthy trust-funder with time, money and an insatiable desire to assuage guilt at having done so undeservedly well without working? The latter are easy marks, of course, as they simply cannot survive without the sort of attention Julian is getting with his regular Roger name. Whatever. He’s a mystery and that probably means he has something or some wealthy patron to hide.

Regardless, what we seem to be seeing is peak lunacy these days from climate extremists. The hyperbole is beyond belief to the rational person willing to discuss the issues. The extremists generate news of a sort but fewer and fewer are paying attention. Reason may yet prevail thanks to Julian Roger Hallam and his antics.