New York politicians, still imagining they’re living out their energy fantasies, are refusing to accept facts, as if running on empty through a bad neighborhood.

How much self-deception can one practice before submitting to the truth? An infinite amount if New York politicians are any gauge. National Grid and ConEd are politically correct companies if ever there were any. They adopt the green dogma at every opportunity. Yet, they have had to face facts New York politicians continue to deny.

That’s because their very existence depends upon delivering on their promises, whereas the politicos can always can simply refusal to acknowledge any promise has been broken by engaging in a blame game. At a certain point, though, the public sees through the gambit. That’s what’s happening in New York now. New York politicians have been running on empty and they’re about to run out of gas in a bad neighborhood.

I don’t mean to insult any New Yorker by referring to bad neighborhoods. I’m referring, in fact, to the anger we have all have when we’ve been betrayed. A bad neighborhood is any place where the elites have failed to deliver. The “Yellow Vest” protests offer an example; a grass-roots rejection of higher gas prices brought on by political green correctness and no French politician wanted to run out of gas in the midst of them.

New York politicians, though, are about to do just that. Also captured by green political correctness devoid of both facts and reason, they too are in the denial stage with respect to both. Consider this Tweet from one of the most repulsive (policy-wise) New York politicians, Jerry Nadler: 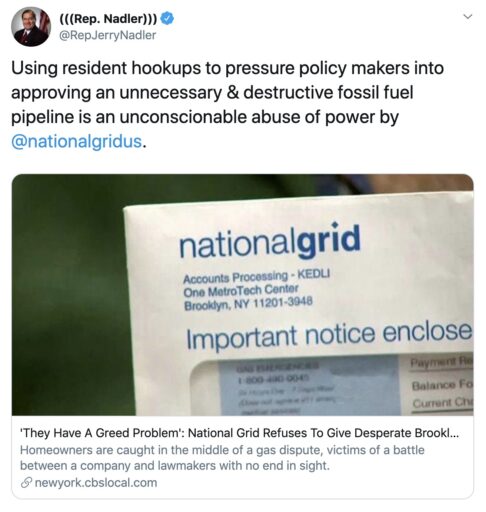 Nadler asserts the Northeast Supply Enhancement (NESE) project is unnecessary. How so? Has Nadler read the FERC analysis? Is he an expert? Who is he relying upon? We get not a hint. We do get a clue, though, as to his real motives. He says, in the same breath he claims it is unnecessary, it is a “destructive fossil fuel pipeline.” He’s against it regardless, in other words. If there were any consistency in his argument he would be happy National Grid is saying no to destruction. Instead, he wants it both ways. This is the essence of the fake morality espoused by New York politicians.

Meanwhile, another set of New York politicians, the leaders of the State Legislature, both being from New York City, do their part to push solar energy down the throats of rural locals. Their sin, though, is one of omission. They simply ignore requests to appoint locals to state siting boards. The boards are Andrew Cuomo’s work-around where locals oppose solar and wind projects. They are supposed to include token local representatives. The work-around for that? Just ignore their selection by locals. It doesn’t get much more haughty than that, even for New York politicians.

Except…except for Andrew Cuomo himself. A New York Post editorial on Saturday sums it up (emphasis added):

National Grid gave months of warning that it would need to impose the moratorium if fresh supplies weren’t ensured.

Con Ed did the same in advance of its recent new-biz moratorium in most of Westchester, which was also prompted in good part by the nixing of new pipelines.

This is the point of the years long green war on pipelines: You can’t burn gas or oil you can’t get.

But would-be consumers are, of course, furious. Which leaves Cuomo and like-minded pols blaming the utilities. Hence the gov’s “broadened investigation” — which is supposed to find, what? That National Grid doesn’t want more customers?

Much of the public eats it up when pols bash utilities. But it won’t change the facts. Give the franchise to another company, and it still won’t be able to conjure fuel out of the air.

He ignored both science and upstate’s economic straits when he made the fracking ban permanent in 2014. (Meanwhile, Pennsylvanians prosper by fracking their share of the Marcellus Shale.)

Then there’s his renewable-energy goals. In 2015 he pledged to run the state on 50 percent renewable energy by 2030. New York actually lost ground on that front last year, but he just upped it to 70 percent — and 100 percent by 2040.

Never mind that this requires vast solar and wind farms that many communities refuse to tolerate plus major new power-transmission lines and new battery technology that may not exist for decades.

Nor that the carbon-free goals will turn even harder to reach when the Cuomo-engineered shutdown of the Indian Point nuclear-power plant begins next year: It supplies a quarter of New York City’s electricity, and there’s no way to get enough “green” replacement power in time.

The United States is now the world’s top energy producer. There’s no reason for any kind of power or fuel shortage in New York, but the Con Ed and National Grid moratoriums are merely a taste of what’s coming.

It takes immense impudence to live life as Andrew Cuomo.

You must be able to deny any and all responsibility.

You must be able to promise to rob Peter to pay Paul and then blame Peter for not having any money to rob.

You must also be able to then deny Paul any help whatsoever after the fiasco on the premise that he didn’t need the money.

And, then you must be able to proclaim loudly to anyone who will listen, that it is, in fact, Paul’s fault that he even wanted the money.

That’s Andrew Cuomo. That’s New York politicians in a nutshell. They are running on empty, though, and the neighborhood is increasingly rowdy. 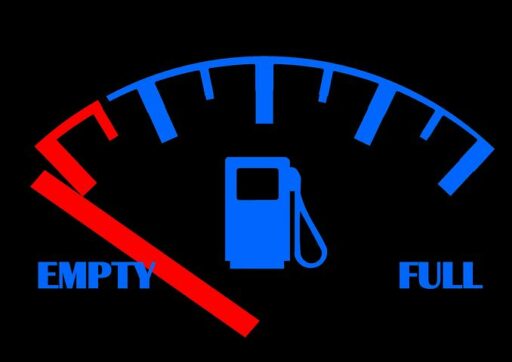