Contempt for middle-class values associated with rural and suburban lifestyles made possible by “industrialization” is at the heart of fractivism.

Fractivism is a particular form of modern environmentalism, so much of which is profoundly elitist in nature. It employs fear of something supposedly, but not really, unknown (hydraulic fracturing) to frustrate any development of rural America that might lead, God forbid, to more suburban-type subdivisions or, worse yet, yield a mall or some fast-food establishments that would mar the view of urban visitors.

That’s why we see the word “industrialization” employed so often by fractivists. They’re not talking about drilling rigs, which disappear after a few weeks, or compressor stations that are seldom even noticed after being built. No, they’re talking about the other development that comes with gas drilling; hotels, restaurants, equipment dealers, offices, new housing and upgraded fire stations. It’s the development as a whole they detest. It’s all so tacky, so middle-class, so vulgar to them. 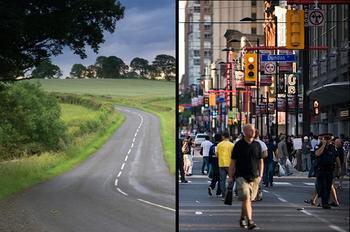 I’ve spent over 40 years writing zoning laws for various communities and I try hard to ensure what I write is practical, limited to what’s necessary for public health and safety and is not anti-growth. I’ve noticed, though, the closer my client communities are to Manhattan, the more anti-growth and exclusionary they become with their zoning over time.

There are exceptions, of course, but, generally speaking, the thrust of zoning in many, though not all, Hudson Valley communities is to keep out other people out, to maintain some amorphous “rural character” that long ago disappeared in real life and, above all else, to prevent any more of those little single-family houses in which middle-class families like to raise their children. It’s all about “smart growth” that all too often is code for “no growth.” Artificial “carrying capacities” are invented to justify limits based on some vague undefined notion of sustainability, which invariably means whatever anyone wants it to mean.

This is the same philosophy that motivates fractivism. The needs of the middle-class for jobs and economic opportunity simply aren’t relevant in the minds of fractivists – they see the middle class, in all it’s ordinariness, as the problem. They aren’t the least bit interested in addressing the economic side of the equation because they view the economic development itself as a negative. An article in City Journal from 2010 by Fred Siegel provides further insights. Siegel makes the point that modern environmentalism, in many respects, has much in common with nineteenth-century British Tory Radicalism, “an aristocratic sensibility that combined strong support for centralized monarchical power with a paternalistic concern for the poor.” He explains:

Its enemies were the middle classes and the aesthetic ugliness it associated with an industrial economy powered by bourgeois energies. For instance, John Ruskin, a leading nineteenth-century Tory Radical and a proponent of handicrafts, declaimed against “ilth,” a negative version of wealth produced by manufacturing.

Like the Tory Radicals, today’s [they] see the untamed middle classes as the true enemy. “Environmentalism offered the extraordinary opportunity to combine the qualities of virtue and selfishness,” wrote William Tucker in a groundbreaking 1977 Harper’s article on the opposition to construction of the Storm King power plant along New York’s Hudson River. Tucker described the extraordinary sight of a fleet of yachts—including one piloted by the old Stalinist singer Pete Seeger—sailing up and down the Hudson in protest. What Tucker tellingly described as the environmentalists’ “aristocratic” vision called for a stratified, terraced society in which the knowing ones would order society for the rest of us. Touring American campuses in the mid-1970s, Norman Macrae of The Economist was shocked “to hear so many supposedly left-wing young Americans who still thought they were expressing an entirely new and progressive philosophy as they mouthed the same prejudices as Trollope’s 19th century Tory squires: attacking any further expansion of industry and commerce as impossibly vulgar, because ecologically unfair to their pheasants and wild ducks.”

Neither the failure of the environmental apocalypse to arrive nor the steady improvement in environmental conditions over the last 40 years has dampened the ardor of those eager to make hair shirts for others to wear. The call for political coercion as a path back to Ruskin’s and Mishan’s small-is-beautiful world is still with us. Radical environmentalists’ Tory disdain for democracy and for the habits of their inferiors remains undiminished. True to its late-1960s origins, political environmentalism in America gravitates toward both bureaucrats and hippies: toward a global, big-brother government that will keep the middle classes in line and toward a back-to-the-earth, peasantlike localism, imposed on others but presenting no threat to the elites’ comfortable lives.

Reading this, I was struck by how accurately Siegel captures the essence of the fractivist movement, though he wasn’t addressing this particular environmental subset. He quotes Ruskin, who employed the term “illth” in his Unto This Last essay in which the latter also said (emphasis added):

That country is the richest which nourishes the greatest number of noble and happy human beings; that man is richest who, having perfected the functions of his own life to the utmost, has also the widest helpful influence, both personal and by means of his possessions, over the lives of others.

Ruskin was a complicated character, and it’s dangerous to draw too much from one line, but in it we see the pompous philosophy of the Park Foundation today, for example, which views any development of the Finger Lakes as an affront and uses its inherited wealth to stymie as much of it as possible. It explains why the JLCNY’s pleas to Park heirs for reasonableness on the gas issue were met with condescending comments suggesting the loss of economic opportunity for upstate landowners from the fracking ban the latter sought was just “collateral damage.”

Like the Park heirs, Ruskin lived well in a big house overlooking a lake, Lake Coniston in his case, and here is a photo of his Brentwood house and gardens today: 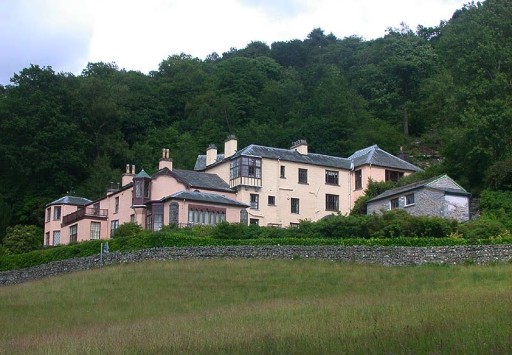 Revealingly, the Ruskin’s admirer who posted this picture on his blog (click picture for link), writes the following description to accompany it:

Here John Ruskin spent the last 25 or so years of his life, seeking peace from his inner torments, away from the black smoking chimneys, symbols of an industrialisation, borne of greed for money, which he saw as destroying all that it touched.

It’s a fascinating comment, isn’t it. The writer, channeling Ruskin, sees greed, not in the man who built the mansion on the lake and wanted to keep everyone else away, but, rather, in the men who created economic opportunity for others. It is fractivism defined. It is the Park Foundation defined.

These are people who would rather there be no rural economic development, or rural development of any sort for that matter. Another recently published article by the great Joel Kotkin, talks about the political assault on suburbia, which provides further insights into the minds of such people. He notes the following:

Obama’s urban policies are of a piece with those of “smart growth” advocates who want to curb suburban growth and make sure that all future development is as dense as possible.  Some advocate radical measures such as siphoning tax revenues from suburbs to keep them from “cannibalizing” jobs and retail sales. Some even fantasize about carving up the suburban carcass, envisioning three-car garages “subdivided into rental units with street front cafés, shops and other local businesses” while abandoned pools would become skateboard parks.

At the end of this particular progressive rainbow, what will we find? Perhaps something more like one sees in European cities, where the rich and elite cluster in the center of town, while the suburbs become the “new slums” that urban elites pass over on the way to their summer cottages.

It’s an apt description of the kind of thinking I’ve repeatedly witnessed from those summer cottage dwellers when they attend rural planning board meetings to oppose anything and everything in their second-home communities, as the Columbia University professor lectures his rural neighbors on what they must do to ensure no one follows him to the country or attempts to actually make a living there. Kotkin has more though:

Forced densification–the ultimate goal of the “smart growth” movement—also has inspired opposition in Los Angeles, where densification is being opposed in many neighborhoods, as well as traditionally more conservative Orange Country. Similar opposition has arisen in Northern Virginia suburbs, another key Democratic stronghold.

These objections may be dismissed as self-interested NIMBYism, but this misses the very point about why people move to suburbs in the first place. They do so precisely in to avoid living in crowded places.

Kotkin has it correct. It is not anti-social to want to live in a less crowded area and, just as many people want to live in the suburbs, others want to live in rural areas, and there will always be tension between those who came to get away from crowds as others crowd in. It’s a natural reaction. NIMBYism is impossible to ultimately defeat in that respect, but it can be controlled by our laws and it must not become the basis for excluding economic opportunity, which is exactly what fractivists seek. It must not become the basis for preventing people from living in, making a living in or moving to a rural or suburban area.

Communities change and managing the change, not stopping it, is what it’s all about. It’s not about preserving bedroom communities or fighting growth or stopping “industrialization,” as fractivists wrongly characterize natural gas development. Their battle is against the middle class, while ours should be to advance it by creating economic opportunity.

5 thoughts on “Contempt for Middle-Class at Heart of Fractivism”