An article in Forbes by Bill Powers rings the “end is near” bell for shale gas but his powers of prediction are way overrated.

Fractivists always want it both ways. One minute they proclaim we are awash in a glut of gas which is a problem, they say, because we’ll destroy renewables at which point the evil industry will raise prices on all of us. They next minute they say everything is in decline, overestimated and over-promised, and we’ll be left in the dark without adequate energy to turn around.

Bill Powers may not be a fractivist per se – he’s on the board of Arsenal Energy – but, he surely falls into the latter category. He has published a book on the subject, pals around with Art Berman and just wrote a piece in Forbes arguing disaster awaits unless we turn to distributed energy (solar panels and the like). It’s an interesting article and the philosophy of distributed energy is appealing but there are some gaping holes in his theories.

Bill Powers has a Bachelor of Science in Business Administration from Georgetown University (1993). Here’s how he describes himself:

Bill Powers an independent analyst and private investor. He is the former editor of the Powers Energy Investor, the Canadian Energy Viewpoint and the US Energy Investor. He has published investment research on the oil and gas industry since 2002 and sits on the Board of Directors of Calgary-based Arsenal Energy. As a true contrarian, Powers uses independent and verifiable sources to come to conclusions that may not be the conventional wisdom of the day.

The Arsenal Energy website says he’s “a founder and asset member of Powers Asset Management, LLC since June, 2005″ but the SEC says the firm is inactive, and there’s little else in the way of background on the guy except that he says he’s been investing for 25 years, which means he must have started in high school, I guess. Arsenal Energy is involved with oil and gas development in Alberta, British Columbia and North Dakota. It is a fairly small conventional oil and gas producer.

This may account for the Powers “contrarian” attitude, but one suspects it’s more a matter of grabbing attention and what better way to do it than holding yourself out as a maverick so anti-gas groups can seize on your opinions and promote them for you? Regardless, what matters much more than Powers’ motivation is his credibility. Does he have a case? Well, let’s look at some of his previous predictions.

Four years ago, back on June 29, 2010, Powers said this about Texas production (emphasis added):

Here’s what really happened over the next two years, according to the Energy Information Administration (EIA): 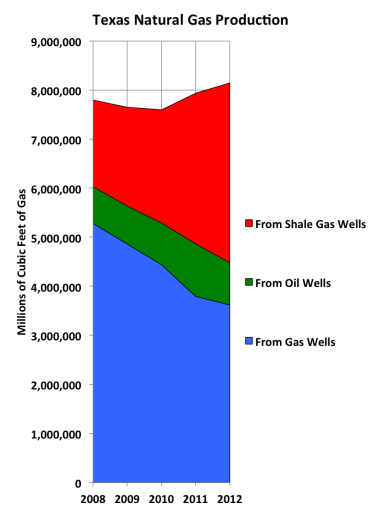 Bill Powers was not only wrong about Texas natural age production as a whole but failed to predict the spectacular contributions of Texas shale gas, which far more than made up for declines in gas produced from conventional wells. Judging shale wells based upon conventional experience is, according to others in his field (see “Why Bill Powers Is Dead Wrong”), a fundamental problem with the way Bill Powers analyzes things. Critics accuse him of “applying conventional oil field metrics to unconventional fields” and that seems to be the case here.

Let’s look at some more of those Bill Powers predictions:

February 25, 2003: “Barring a big discovery near existing infrastructure, which is very unlikely since this is what every petroleum geologist is looking for, we have very little chance of drilling our way out of today’s natural gas supply situation.”

Another chart will suffice to address that prediction, as the Barnett Shale was already taking off by 2003 and this is what it did for the next eight years (production increased by a multiple of 8X):

October 1, 2009:  “As an aside, in December 2007, I was at an industry conference in a very snowy Pittsburgh where I listened to a representative of Range Resources discuss how his company was fully committed to the Marcellus and was putting the full resources of the company into its development. Given all of the company’s efforts and money put into the Marcellus and their continuous promotion of the play, I find it very odd that Range Resources has not been able to achieve more than 80 million cubic feet per day (mmcf/d) of production two years later. Therefore, based on the slow ramp up of production from the Marcellus, I expect the play to be producing approximately 500 mmcf/d in June 2011.”

January 6, 2010: “I came to the conclusion that we are headed for a severe supply deficit after I examined the production profiles of the major conventional and unconventional fields in the US and Canada. By June of 2011, only 19 months from now, we are on pace to suffer a reduction in US gas supply of approximately 8.5 billion cubic feet per day (bcf/d) – approximately 13% of US supply.” 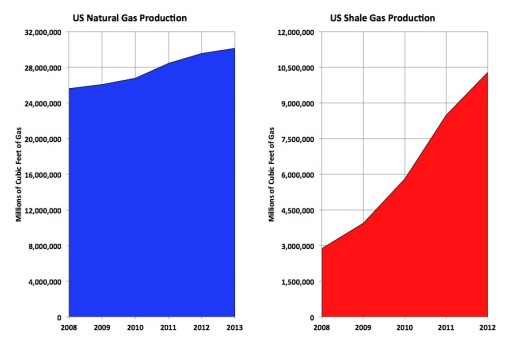 Ok, so the guy got some pretty serious predictions wrong. Could he be correct now? There’s always that possibility, of course. Nothing goes on forever, things changes and trends reverse. We get some further insights into the Bill Powers way of thinking with this statement from the this sentence in the Forbes article:

More importantly, given that America is the most thoroughly explored petroleum producing country on earth, it is very unlikely new shale gas fields lie in wait of discovery.

Putting aside the fact this sounds a lot like that Patent Office remark of many decades ago that everything had been invented, it sounds even more like what he said in February, 2003 above; namely that “since this is what every petroleum geologist is looking for, we have very little chance of drilling our way out of today’s natural gas supply situation.” Eleven years later, he’s making the same pitch seemingly oblivious of all that has happened – the shale revolution. New discoveries are being made every day, as we learned just last week with Shell’s success in developing Utica Shale wells most of thought weren’t possible. We’re also seeing operators explore multiple formations and levels from the same well pads. And, we’re seeing ever bigger “monster wells” and lower costs of production.

Bill Powers also makes a big deal over the recoverable reserves numbers, interchanging EIA and USGS data that measure different things and are dynamic measures that depend upon technology and price. Yet unknown technology is constantly extending the boundaries of what is recoverable. That is why people who have famously made careers out of predicting when we’d run out of things have all been not just wrong but stupendously wrong, as when, in 1939, the US Department of the Interior said that American oil supplies would last only another 13 years. Thomas Mathus (who later rejected his own theories) lives in the hearts of all know-it-alls, as the success of the now irrelevant Limits of Growth book proved in the 1970’s.

Prices also determine reserves. When prices go up, more gas is theoretically economically recoverable, so reserves grow. When prices go down, less gas is theoretically economically recoverable, so reserves shrink. It’s basic economics and it tells us almost nothing about where things are headed. We do know that if production slows, prices will increase and either more gas or other energy sources will be developed in response. We’ll never run out of the stuff because prices will direct us to where we need to go. It’s the lesson of history.

Where will it be that we’ll go? I confess I don’t know for sure – I’ll make no foolish predictions to embarrass me later. I do fully expect distributed energy to be part of our future because it makes so much sense from a security perspective, but it will depend on the prices and right now shale gas is the future because the economics work. Could that change? Sure, but we can just as easily find new sources and ways to recover natural gas economically. The record of the last decade proves it and not one bit of it was predicted in advance by Bill Powers. Nothing Bill Powers has said, in fact, amounts to more than the latest version of the Mathusian argument, another “peak oil” fantasy of “problem huggers” as our buddy, Nick Grealy, calls them.

Let’s also remember one other thing. Distributed energy doesn’t have to be solar or wind or any of those other renewables the “problem huggers” insist are the only solutions. No, it can be home electricity generation using natural gas or it can be a natural gas well on your own property. Many readers will recall Jennifer Huntington, the plaintiff in the Middlefield case simply wanted to drill a gas well on her own property to help run her own farm. It would not have involved high-volume hydraulic fracturing but was stopped by a band of zealots in charge of the Middlefield Town Board who were determined not to let any natural gas development occur anywhere near their tony Cooperstown area homes.

Those are the zealots to which Bill Powers has played with his arguments in this HuffPo interview, for example. It’s a great gig, I guess, but it seems to me the arguments employed by Bill Powers against shale gas are more applicable to his own theories, which have been consistently wrong and sooner or later he’ll run out of believers. It’s the law of physics isn’t it?