The Marcellus Shale, among others, is turning the US into a worldwide energy powerhouse the likes of which has not been seen and much of it is happening in little old Susquehanna County, Pennsylvania.

Could the US be on the threshold of becoming a world energy powerhouse? The US is not currently exporting LNG, and isn’t allowed to export crude oil. But it can export refined products and there have been surging exports of diesel to Europe, gasoline to South America and even jet fuel deliveries to Europe. Throw in LPG and ethane, (a new agreement for Marcellus Shale ethane was signed recently to export US ethane to Ineos in Europe starting next year), and it’s not too surprising to learn US energy exports have now surpassed the value of goods from export giants like Boeing, Caterpillar and Microsoft.

Energy exports have a double benefit as they lower the demand for imports at the same time that US production takes $40 billion off the import bill.

Marcellus Shale Is the Friendly Monster

Recent events in London and Washington underline how US shale gas resources estimates have to be reassessed towards the upside as Laszlo Varro of the International Energy Agency (IEA) told a conference in London, on February 19, the rapid move from scarcity to abundance is transforming their scenarios. It is making what were high base case scenarios just two years ago the low case ones of today. 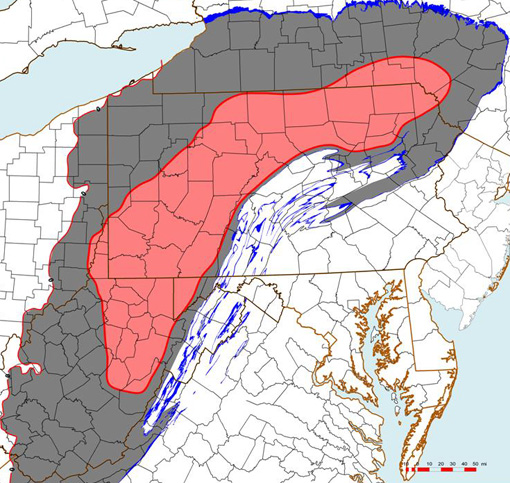 The production is coming from all over, but the Marcellus Shale is the monster, producing more than 19BCM in 2013 from Susquehanna County alone. To put that in perspective, that is almost half of the 2012 entire North Sea Production of 41BCM, and equal to combined LNG imports of the UK and Italy in 2012. Susquehanna County did not produce so much as a molecule of gas until 2008.

The production comes on the back of constant process improvements in number of wells per pad, length of laterals and shorter drill times, a trend seen throughout dry gas fields, but with more to come from two key areas. 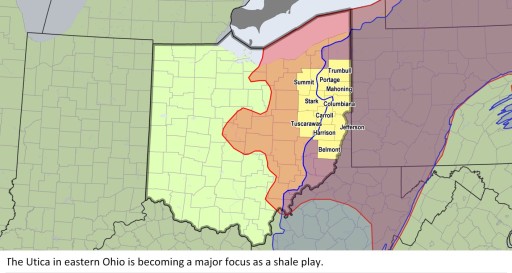 One is the Utica shale in Ohio (depicted above), where we’ve seen huge numbers revealed recently:

Magnum Hunter Resources’ Friday announcement of a prolific Utica Shale gas well in Monroe County, Ohio, highlights the migration of Utica drilling south out of its original core in Carroll County.
Houston-based Magnum Hunter said its first dry gas well off the Stalder #3 pad was placed into production this week with a peak rate of 32,500 Mcf/d. The pad could eventually hold 18 wells, Magnum Hunter said.
Analysts at energy investment bank Tudor Pickering Holt on Friday crowed about the “huge” well.

Bentek Energy, a division of Platts, has also noted they have raised their Q1 2014 estimate for 2014 gas production by 8% from only three months previously, based for the most part on the Utica. 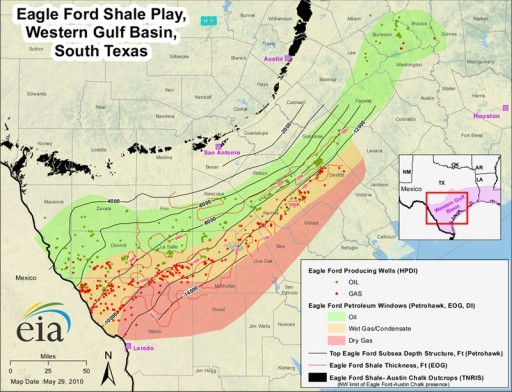 Meanwhile, the Eagle Ford Shale in South Texas (see map above) has been producing prolific quantities of oil, up to 700,000 barrels a day from a standing start four years ago, as Barclays reveals:

“Without a change in drilling activity and with a 10% gain in drilling efficiency, natural gas production in the Eagle Ford should maintain last year’s pace of growth and rise 1.4 Bcf/d to an average of 6.8 Bcf/d in 2014,” the analysts say.
“We are seeing a lot of production growth for natural gas and we’re forecasting similar growth in 2014,” Shiyang Wang, coauthor of the study, said in an interview.

How big a number is that? A handy rule of thumb is to multiply BCFD by ten to get billions of cubic meters per year, making 6.8 BCFD is 70.2 BCM a year, or the entire gas consumption of France, Belgium, Luxembourg and Switzerland combined.  Again, this has only started from even later, in 2010, highlighting the real potential of our own UK shale, in contrast to those who like to say it will take over ten years to produce only 15 BCM.

“A Landscape of Abundance”

Any doubts about the size of the US natural gas resource can now be put aside. As Paula Gant, Deputy Assistant Secretary of Energy for Oil and Natural Gas put it during a Washington, DC event sponsored by the Center for Strategic & International Studies,  on February 11:

Here’s the video of that entire event, which is well worth watching if you have the time:

Adam Sieminksi of the US Energy Information Administration, at 16:35, demonstrated how the previous high reference case for natural gas is the new base case. He provides a figure that is absolutely stunning: 100 BCF per day by 2040 or over 1,000 BCM by 2040, compared to a total EU consumption of 500BCM today, or 700 BCM for the US.

If that wasn’t high enough, a presentation by Encana and IHS noted “unconventionals have the potential to account for up to 10 times the conventional recoverable resource”

These are absolutely astonishing numbers, so large as to be almost inconceivable. This is like describing something as a gazillion. An ultimate recoverable resource of over 10,000 TCF is 400 years of current US gas demand and 4,000 years of UK demand, yet these are numbers given at high government levels in the same forum as the Energy Information Administration and US Energy Department. Some perspective is provided by the fact the entire planet produced 117 TCF in 2012. This means the United States alone has enough gas to power the planet for 85 years.

At this point let me recommend a book that even I thought was entirely mad a few years ago, Robert Hefner’s Grand Energy Transition.

The Grand Energy Transition, The GET, is an ongoing, powerful evolutionary energy transition that is bringing civilization out of a millennia-long epoch of limited, unsustainable dirty, solid fuels, through what history will record as a relatively short liquid transition to a future epoch of sustainable, virtually limitless, clean gaseous fuels – called by the author, the “Age of Energy Gases.” The GET shows us how to accelerate the transition to the sustainable energy gases of natural gas, wind, solar and hydrogen that can eliminate the civilization threatening consequences of continued coal and foreign oil consumption.

Laszlo Verro, the head of Coal, Gas and Power at the IEA, told me he doesn’t think that, even in Washington, there are many who yet realize the huge competitive advantage accruing to the US thanks to shale gas. He also said, that the US industry were complacent in not tackling public perception,  thinking of it as a European or world problem, whereas the shale gas ban in New York State and nascent troubles even in Colorado and Texas signified that public acceptance was a global issue.

Laszlo also said the coal and gas were going to have the fight of the century and even though coal would get up off the canvas from time to time,  it would eventually be sprawled out, and counted out.