Joe Biden has said he’ll spend trillions on green energy but a little study reveals it’s a nothing but a green slime covered money pit.

Joe Biden is pandering to AOC, green energy extremists and green eggs and scam investors. He has a plan to spend $2 trillion on a green energy slush fund. Unfortunately, that plan doesn’t begin to account for the real cost, doesn’t assure any real progress on emissions and deliberately ignores the measures that might make a real difference. 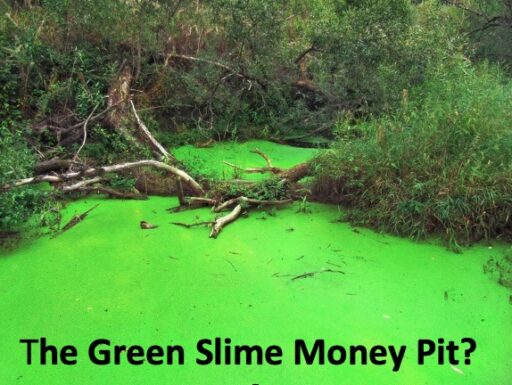 For the second week in a row, the Biden campaign orchestrated the rollout of a new part of the candidate’s policy platform with stories in the Wall Street Journal, Washington Post, and New York Times, this time for his energy policy. The stories were all keyed to an address by Biden, so I listened to the speech in its entirety. I was especially struck by the assertion that “These aren’t pie in the sky dreams. These are actionable policies.”

…The New York Times described that plan thusly: “Joseph R. Biden Jr. announced on Tuesday a new plan to spend $2 trillion over four years to significantly escalate the use of clean energy in the transportation, electricity and building sectors, part of a suite of sweeping proposals designed to create economic opportunities and build infrastructure while also tackling climate change…

[I]t is not a move to a 100 percent renewables electricity grid by 2035. The plan is advertised as spending $2 trillion, which is not even close to enough money. The United States would need enough renewable electricity capacity and storage capacity to produce about 1,100 gigawatts of capacity. Solar power can only produce power during daylight hours, and wind power is most efficient at night, so there has to be redundancy.

And to implement the redundancy there has to be storage capacity that does not yet exist. Still, using the Energy Information Administration’s capital costs from the 2018 Annual Energy Outlook puts the capacity cost at $5.7 trillion. That leaves out the new storage costs. It omits the operating costs. And it skips over the money needed for the transmission lines to get the power where it is needed. 100 percent renewables by 2035 is pie in the sky…

Indeed, it is, but there is something that actually works that requires no trillions, no billions and no millions. It is natural gas which, because utilities have chosen natural gas over coal, reduced carbon emissions by 28% between 2005 and 2017. And, according to the IEA, the U.S. once again led the world in reducing energy-related CO2 emissions in 2019, for trhe same reason. Coal-to-natural gas switching in the U.S. has led to almost 1 Gigatonne of emissions reductions since 2000.The EPA and IEA, in fact, tell us greenhouse gas emissions emissions are now at the lowest level since 1992.

Additionally, there are now more than 60 existing and planned carbon capture and sequestration (CCS) facilities that will help reduce carbon emissions world-wide. More importantly. The United States leads the world in CCS deployment and represents about 80% of the world’s total carbon dioxide capture capacity.

Will Joe Biden consider these facts? Not a chance. If he isn’t paying attention now when he ought to be moving to the middle politically, there is zero possibility he ever will. But, states such as Pennsylvania might and should pay attention. RGGI and other stupid green tricks won’t get the job done, but continued natural gas development here and export of the product to states such as Maryland, New Jersey and New York could help a lot. It is, in any case, one heck of lot better than the alternative, which is the green slime covered money pit and increased use of heavy oil (almost as bad as coal) to supply energy when the sun doesn’t shine and the wind doesn’t blow.