Josh Fox has a weekend home in Wayne County near a test gas well. The USGS just tested the water in the neighborhood.

We did a post on August 9 regarding USGS investigations of Pike County, Pennsylvania water wells, that revealed the Josh Fox firewater claims were largely bogus, there being plenty of methane in the water without any drilling nearby. Now comes a second USGS study done about the same time for Wayne County, Pennsylvania, which is next door and where Josh Fox has a weekend home (actually, his father does, and he uses it). Wayne County has no producing or recently tracked wells but it does have nine recently drilled test gas wells. This USGS study also reveals some interesting things contradicting the Josh Fox story.

The USGS tested 34 water wells from throughout the county in 2011 and 2013. Out of all these water wells, the closest to any gas drilling (Well Number 283) happened to be in Milanville, Pa. according to the map included (see below). It appears to be less than two miles from the Crum well which was drilled in 2010 by Newfield Exploration Co. as part of its assessment program, before the Delaware River Basin Commission (DRBC) shut down everything by refusing to act on already prepared natural gas regulations and took away the mineral rights of landowners.

The Josh Fox fairy tale, of course, starts with a false narrative about him being a Milanville boy who got offered a $100,000 to allow drilling and turned it down, none of which is true. He was raised in New York City and was never offered $100,000.

The Fox weekend home and the Crum well site are roughly a mile apart but here is what Josh Fox told a fawning interviewer from The Nation magazine in 2010:

I’m one of the people at risk here. I’ve got these gas wells a couple of hundred feet from my house. If I don’t figure out how to stop this thing, I’m going to lose everything I have.

He couldn’t help himself and arbitrarily reduced the one mile distance to a “couple of hundred feet,” which is mild by comparison to other Josh Fox lies, but it’s the “I’m going to lose everything I have” comment that is the more gross exaggeration. It is typical of what we here from fractivists, yet we know the Crum well was successfully drilled and Fox is still there. The well wasn’t tracked, of course, but fracking has nothing to do with methane migration. If faucets were going to flame, it would have had to happen as a result of drilling or pre-existing conditions. 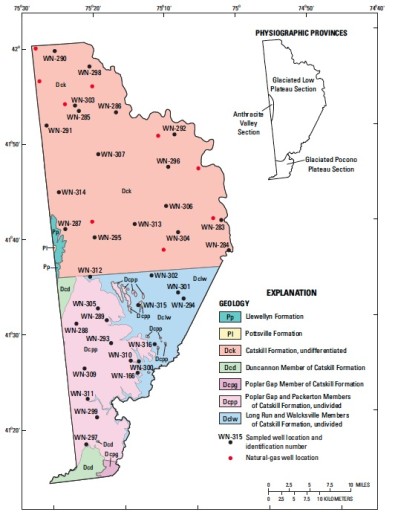 Unfortunately – for Josh Fox – the Milanville and other wells tested by the USGS showed methane in 22 of the 34 wells sampled (65%), but the methane in the water well nearest him and the Crum well, post-drilling, was below the detection limit, while the well with the highest methane level (3.3 mg/L) was found in Southern Wayne County, more than 10 miles from gas well. None of these methane levels are dangerous or likely to cause flaming faucets but, isn’t it interesting that the one well closest to drilling had no detectable methane? Josh Fox lost nothing and gained everything by spinning his wild story.

Take notice of the radon, in particular. Some 97% of water samples exceeded a proposed new EPA standard for radon-222. Moreover, the three highest readings all came from Southern Wayne County, far removed from any drilling.

Looking at the USGS data as a whole, we don’t see any major surprises and that’s the point. There is a wide range of elements in the water, they occur all over the county and there is no correlation with drilling activity. Fracking has taken place yet, so there is no relationship to that either. Josh Fox said he’d lose everything and he didn’t. Sadly, that doesn’t make a headline or a polemic like Gasland, but the truth keeps dribbling out courtesy of the USGS and helpful guides such as this one.  May it continue until Josh Fox is only a distant memory, the one-hit wonder kid who never scored again. We’re two-thirds of the way there already.