The trustfunder fractivist is ubiquitous – a part of every anti-fracking, anti-fossil fuel, save-the-climate brigade out there – yet has zero credibility.

One of the most fascinating aspects of the fractivist movement, to the degree it is one and not the mere manipulation of “useful idiot” ideologues by elitist special interests, is the extent to which the supposed leadership consists of trustfunder types. One after another of the fractivist firebrands turn out to be the children of privilege turned against the system that allows them the luxury of living off it while condemning it.

This tendency toward acting out guilt at having undeservedly well is not confined to fractivists, of course. Bill Ayers, perhaps our most famous domestic terrorist, is, perhaps, also the most infamous example of this phenomena, being the spoiled son of a Commonwealth Edison executive who enabled his ways. Most examples are, fortunately, far more benign, but they still do enormous damage collectively and it’s collectivism they seek, even while living off privilege and expecting it to continue. The trustfunder fractivist enjoys far more credibility than he or she deserves.

Illustrating the point is all too easy, as trustfunder fractivist examples abound (see here, here and here, for instance) but a fellow named John Cleveland Abbe provides a fresh perspective. I can’t say whether Mr. Abbe lives off a trust fund set up in his name or not but he is clearly a child of privilege; one who has the financial freedom to be a serial protestor in support of multiple causes, to be an “Occupier” without portfolio who goes wherever the action is.

The Many Faces of John Cleveland Abbe

John Abbe’s name came to my attention via an observant reader who forwarded a link to this E&E story by Hannah Northey about climate change protests at the Washington, D.C. offices of the Federal Energy Regulatory Commission (FERC). Here are a few excerpts:

John Abbe hadn’t heard of the Federal Energy Regulatory Commission until a few weeks ago.

Like many protesters rallying before the agency in Washington, D.C., this morning, he’s now convinced the little-known commission is rubber-stamping a wave of gas projects tied to a national oil and gas boom.

Abbe actually set out from California eight months ago with more than 600 activists on a cross-country trek to raise awareness about climate change — a movement that led him and other protesters to FERC’s doorstep today.

“We were hitting all cylinders on the climate crisis,” said Abbe, a lanky, bearded man wearing a T-shirt emblazoned with the word “endangered,” a backpack and tennis shoes. John Abbe, 49, of Eugene, Ore., joins protesters before an entrance leading into the Federal Energy Regulatory Commission’s headquarters in Washington, D.C., the second day in a weeklong event to disrupt the agency’s operations. Abbe hadn’t heard of FERC before joining a climate march that began in March on the West Coast and reached D.C. this week. Abbe said he’s now trying to educate the public about the commission’s handling of gas projects tied to hydraulic fracturing and methane leaks.

Abbe, linking arms with protesters chanting, “This is what democracy looks like,” said he left Wilmington, Calif. — he lives in Eugene, Ore. — to join the Great March for Climate Action, headed by Ed Fallon, a former Iowa politician who served seven terms in the state Legislature and ran in the Democratic gubernatorial primary in 2006.

Participants were asked to raise $20 a day — an amount that was later decreased to $10 a day — and slept at churches, schools and homes along the way, Abbe said…

Abbe said he ended up walking almost 1,500 miles, culminating in a weeklong protest before FERC’s headquarters this week, when climate activists joined forces with Beyond Extreme Energy and other organizations opposed to hydraulic fracturing and fossil fuels. Abbe said the event — at which 11 people today were arrested — is aimed at drawing attention to FERC’s approval of a wave of proposed gas pipelines, compressor stations and export terminals.

Abbe said FERC is too reluctant to consider methane leaks and the increased use of hydraulic fracturing when approving new projects and is too close to the industry it regulates. “It’s like the fox guarding the henhouse,” Abbe said. “I think we need to change those hurdles [in environmental reviews], we need to consider climate.”

Here’s what our reader had to say:

Apparently it only takes like a week or so for some people to go from “hello, I never heard of the agency” to “I’m going to get arrested giving it the finger as I know it is a rubber stamp machine. (I’ve been hearing this for some time, so yawn). FERC is a rubber stamp machine.. like the fox guarding the hen house…inherently dangerous, all pipelines leak.. We don’t have a fracking problem, we have a democracy problem…blabbety blah.

That’s about right, but there’s more. John Cleveland Abbe has the luxury of being flaky and doing nothing but. He comes from wealth, even if he has no trust fund to live off. His ancestral family includes: Cleveland Abbe, the guy who founded the National Weather Service; Robert Abbe, the famous physician; William Colgate of Colgate-Palmolive and Robert Abbe, the semi-conductor pioneer and CEO of ADE Corporation, who is apparently John Cleveland Abbe’s father. His parents created a charitable remainder trust for the benefit of Harvard University, where John Cleveland Abbe was sent by them to get a degree in 1989 and where he served as an organizer in the Harvard-Radcliffe Science Fiction Association.

Science or Science Fiction? The Life of a Trustfunder Fractivist

Much of John Abbe’s life could be called science fiction, including his current role as the protagonist turned instant expert on FERC’s proper role vis-a-via global warming. He lives a vagabond life of sorts because he can, of course. His website and blog are revealing and readers can peruse them on their leisure time. He has plenty of leisure time himself, apparently. 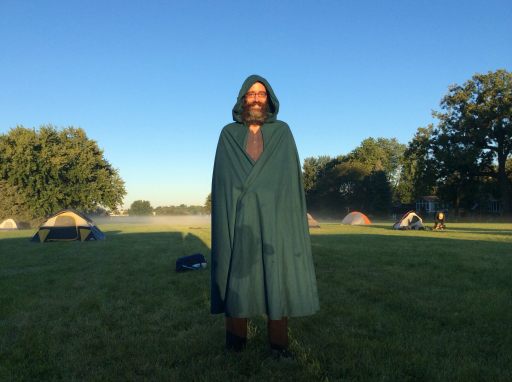 John Abbe in his cloak

Abbe claims several distinctions, including being a software designer of something called “Wagn” and serves as President of the “Co-Intelligence Institute,” which says this about itself:

The Co-Intelligence Institute works to further the understanding and development of co-intelligence. It focuses on catalyzing co-intelligence in the realms of politics, governance, economics and conscious evolution of ourselves and our social systems. We research, network, advocate, and help organize leading-edge experiments and conversations in order to weave what is possible into new, wiser forms of civilization.

We can all use  a lot more of that, I suppose.

John Cleveland Abbe has also served as “Marcher (#22) and Guerrilla Facilitator” in the Great March for Climate Action. The #22 thing is a nice touch – welcome to the world of collectivism where we’re all numbers instead of individuals, unless, of course, you’re one of the privileged who gets to “work” for social change instead of actually work for a living. He’s also a resident in and leader of the Walnut Street Co-op in Eugene, Oregon, an oil-heated nine-bedroom communal living facility. The “Investors Packet” says:

We are consensus-based, multi-generational (in our 20s, 30s, 40s, 50s, and 60s), and egalitarian (e.g., same rent for very different rooms, and no one is “in charge”). We share many things, but are not officially income-sharing.

Apparently, “egalitarian” only goes so far. It doesn’t include income sharing. One wonders why. Perhaps, John Cleveland Abbe wants his to himself so he can parade around the country as our environmental conscience and not actually have to work for a living.

It would be fun to go on further, but pointless. The reader sees the truth about John Cleveland Abbe, the privileged Occupier, who, when he’s not protesting gas pipelines or Crestwood’s gas storage proposal for Upstate New York or some similar project, is busy being a busybody somewhere else, telling the rest of us, who do have to work for a living how we should live. As for the science, well, that can be picked in less than a week with time left over for the march. It’s all science fiction anyway, right? Who needs it?

A trustfunder fractivist such as John Abbe, to be fair, is seldom as dangerous as Bill Ayers. I suspect Abbe is a pleasant enough fellow who sincerely believes in what he does. Nonetheless, he’s dangerous because he has the luxury of being outrageous to get noticed. That alone will always draw multiple paragraphs and headlines in media where too many of the journalists are too lazy to research who these people actually are and examine their credibility. E&E’s story at least highlighted Abbe’s nonsense in protesting an agency he just learned about. We can be thankful for that, but we see many more stories of trustfunder fractivist activities that never get exposed for what they are. That’s why we intend to do more of it here at NaturalGasNOW.org.