Throwing consistency out the door, the Delaware Riverkeeper has suddenly decided it likes state rights as long as they produce the results it desires.

The Delaware Riverkeeper has just filed an appeal with the Supreme Court that threatens to completely undo the authority of FERC to regulate pipeline construction. It does so by arguing states themselves get to determine when the times up on a strict one year limit given to states under the Natural Gas Act to decide on Water Quality Certifications under the Act. If the Supremes should take the case and agree with the Delaware Riverkeeper, it would turn that one year deadline into an endless series of challenges designed to kill any project by delay.

Before getting into the appeal itself, the threat of which is easy to understand once you think about it a bit, it’s worth reflecting on the absurdity of the whole thing.

First, of all, it’s about the Atlantic sunrise pipeline that is already built and operating. What the Delaware Riverkeeper is attempting to do here has nothing to do with the Atlantic Sunrise, which is merely a chess piece—a rook—to move around the board with right and left turns intended to confuse the enemy. It’s really about the Constitution Pipeline, the PennEast Pipeline, the Northeast Supply Enhancement project and any other Northeast pipeline that might allow natural gas development in the region; development that frustrates the NRDC gang and friends’ plans to make wilderness playgrounds while they pursue their special financial interests.

Secondly, note who filed the lawsuit: 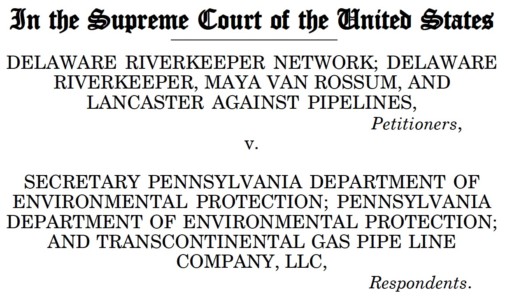 Lancaster Against Pipelines is merely a bunch of true believers sucked into the cause. They’re not important. The other three are the same people. Maya van Rossum is the Delaware Riverkeeper, an appointed representative who serves as the Chief Executive Officer of the Delaware Riverkeeper Network, Inc., a private non-profit corporation. Once you’ve listed the corporation as a petitioner, there is, in other words, no point whatsoever in adding the “Delaware Riverkeeper” and the person of Maya van Rossum except to massage someone’s oversized ego, which, of course, is the point. We’re talking pure hubris.

Then, as we get into the case itself, we see what it’s all about, as stated in the opening “Questions Presented” summary offered by the Delaware Riverkeeper (emphasis added):

See the subtle attempt to turn things upside down? It is the federal Natural Gas Act that sets the standard:

If the State, interstate agency, or Administrator, as the case may be, fails or refuses to act on a request for certification, within a reasonable period of time (which shall not exceed one year) after receipt of such request, the certification requirements of this subsection shall be waived with respect to such Federal application.

But, the Delaware Riverkeeper (DRN) would have everyone believe the state can extend the one year ad infinitum by taking the time to hear challenges from the likes of themselves as long as they can muster up the money from their William Penn Foundation and company enablers to file frivolous lawsuits. The DRN, you see, wants to substitute a state finality standard for a Federal finality standard, the exact opposite of what it argues. This, of course, the nature of all Alinskyites: always accuse your enemies of whatever it is you are doing.

Later on in the filing we find this DRN assertion:

The federal government does not have the power to issue a direct order to the government of a state thereby “conscript[ting] state governments as its agents” and may not dictate “what a state legislature may and may not do.” This is exactly what the Third Circuit has done … by commandeering Pennsylvania’s legislative and administrative processes.

The word play here is rather amazing, although not so much considering it’s DRN we’re talking about.

First, it is Congress, not the Third Circuit, that limited states to a maximum of one-year to do their work, which is far more than enough. Secondly, it is, therefore, the duty of the states to get their work done in a time that allows for internal appeals within that one year. It could dissolve the Environmental Hearing Board but that’s not necessary and would be an over-the-top reaction. All that is necessary is for the state to do its work in, say, six months, so as to allow an appeal the EHB could then schedule to be heard and decided in the next six months so as to meet the one-year rule. It’s as simple asa that.

But. it’s the shear chutzpah of DRN that rankles. Since when has the Delaware Riverkeeper, the Queen of Obstruction, favored state rights? Certainly not in the case of the proposed DRBC fracking ban, which would disrespect state sovereignty to the nth degree. Pennsylvania allows fracking everywhere it’s viable. It isn’t DEP regulations that prevent it in Wayne County where I live. Rather, it’s a DRBC moratorium the agency now wants to turn into a ban. The DRBC has been doing DRN bidding on this issue for a decade, telling the Commonwealth it cannot allow fracking despite there being no DRBC authority or standards to justify that position.

And, now the Queen wants the feds to back off so the states can stop pipelines? Give us all break, Maya. This is ridiculous. You don’t don’t give a damn about state rights unless they happen to deliver what you desire and that is to please your funders and assist their plan to make a wilderness playground of the Upper Delaware.