Josh Shapiro is running for reelection as Attorney General this year and for Pennsylvania Governor in two years and he’s using secret show trials to do it.

Josh Shapiro is climber; the sort of climber who yanks the heels of those just above him to throw them off the ladder, so he get to the top more quickly. He’s a rather nasty fellow as can easily be observed in the way he treated our State Representative in this little colloquy. Our guy certainly handled it well, but notice the condescension and the contemptuous “how dare you question me” attitude from Shapiro. This is a man with an agenda who’s not about to let some State Rep. from the other party get in the way. Now, he’s gone full Stasi on the gas industry and Governor Wolf’s DEP using a secret show trial to do it. 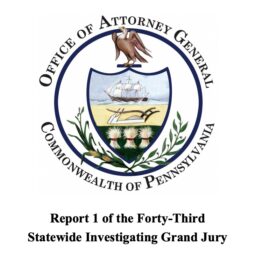 Yeah, I know. How can it be both secret and a show trial? Well, that’s simple. You use a grand jury that meets in secret, present a single side of the case, one largely focused on rehash of old shibboleths and hyped up stories about cases already resolved, get it to issue a piece of political propaganda structured as a report and then run to the press to proclaim your own leadership. It’s a technique for grabbing governorships that’s been proven by the likes of previous governors, both Democrat and Republican, especially in New York, but also Pennsylvania.

Such is what has happened with the recent Shapiro production called “Report 1 of the Forty-Third Statewide Investigating Grand Jury.” We reposted Mike Krancer’s excellent takedown of the report and defense of DEP yesterday. It is a joke and has yielded nothing more than a plea of no contest to two misdemeanors along with a trivial $50,000 in fines and $100,000 in contributions to Washington County watershed funds, in the case of accusations made against Range Resources, for example.

Who knows what will happen the rest of it, but this is the perfect illustration of a Shapiro show trial; all talk with no significant results other favorable press for Shapiro. Meanwhile, consider the following:

This pretty well establishes the fact everyone with real knowledge of Pennsylvania’s shale regulatory program—from the regulators to the regulated—sees exactly what’s going on with the Shapiro show trial. There’s no doubt. Nonetheless, to understand more fully one needs to appreciate just how political Shapiro is acting here, because his views seem to have been acquired relatively recently, more especially as his re-election and his future gubernatorial campaigns have approached and the Pennsylvania Democrat party has moved ever further into the green slime covered swamp.

One again, consider the following:

The combination of these facts with the exposure of the totally political statements from the show trial report tells everything we need to know about why Shapiro is making these moves; to avoid being outflanked in green extremism by future political opponents. It’s really that simple.