The meaningless green moralizing connected with plastic politics is looking ever more ridiculous in the face of a real crisis; the Wuhan Corona Virus.

The Canadian government intends to designate plastics as toxic substances, which will allow them the authority to regulate and limit certain products. France prohibited single-use plastic plates, cups, and cutlery starting January 1, and England is enacting restrictions on plastic straws and stirrers beginning in April. Countries in Africa, Asia, and Europe either have bans on plastic bags or tax their usage.

Eight U.S. states have placed a ban on single-use plastic bags—California, Connecticut, Delaware, Hawaii, Maine, New York, Oregon, and Vermont. Former Vice President and Democratic Presidential Candidate Joe Biden called for eliminating plastics during a town hall in New Hampshire where he specifically addressed single-use items such as straws but also seemed to call for a broader ban on the material.

But, plastic materials in the form of masks, gloves, and ventilators are in demand by hospitals and doctors treating patients who have contracted the coronavirus. Plastics are made from natural materials such as cellulose, natural gas, salt, and crude oil through a polymerization or polycondensation process.  Single-use surgical gloves, syringes, insulin pens, IV tubes, and catheters have reduced the risk of patient infection and helped streamline operations by lifting the burden of sterilization.

The ban on plastic shopping bags is back-firing due to the coronavirus pandemic. The alternative, reusable shopping bags, are thought to harbor the virus and could facilitate its spread in grocery stores and pharmacies. An analysis of an outbreak of a novel swine enteric coronavirus disease in 2013 where millions of American piglets died showed that the reusable feed totes were the most likely cause. The feed bags are often made of the same kind of material as reusable shopping bags. 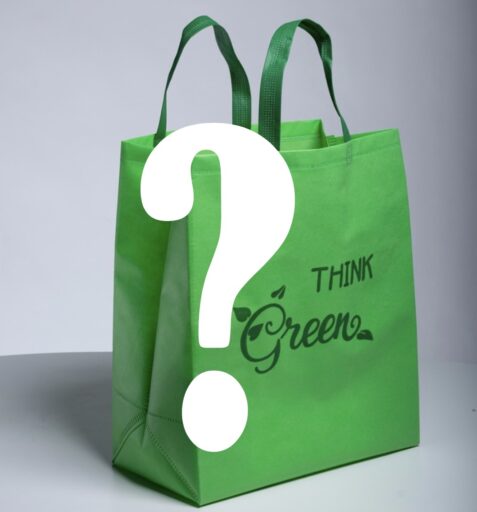 Other studies show similar results. In 2010, several Oregon teens and adults fell ill after attending a soccer tournament, which was traced to a reusable grocery bag that had been stored in a bathroom used before the outbreak by a person with a norovirus-like illness. Soccer players and their chaperones contracted the virus after touching the contaminated bag or eating food carried in it. A 2011 study of grocery shoppers’ reusable bags showed large numbers of bacteria in almost all of the randomly-searched bags and coliform bacteria in half of them because the majority of shoppers said they rarely or never washed them.

Another product containing plastic material are ventilators—crucial medical equipment needed to save patients with acute instances of COVID-19. Ventilators, which cost up to $50,000 each, move air into the lungs of patients who are not able to breathe on their own. In the absence of a treatment for the coronavirus, they have helped keep alive about 5 percent of patients who experience the most acute form of the illness.

Companies that manufacture these devices have been working overtime to satisfy the increasing demand for them. The German government recently ordered 10,000 ventilators—about a year’s production from Drägerwerk AG. Italy, where infections have stricken over 30,000 people and killed more than 2,500 as of March 18, has requested 5,000 ventilators.

Medical experts from China brought nine pallets of medical equipment that included ventilators to Italy and China followed that shipment with another 150 ventilators. In the U.K., British manufacturers across sectors were asked to help with production of ventilators and other medical equipment, including engine maker Rolls-Royce Holdings and earth-moving-equipment maker J.C. Bamford Excavators.

The United States has more domestic ventilator manufacturers than some of the worst-affected countries in Europe. Allied Healthcare, Medtronic, and GE Healthcare are among the largest U.S. manufacturers of ventilators. The U.S.’ Strategic National Stockpile—the nation’s cache of medicines, machinery, and protective gear—has received one request for ventilators so far. President Trump is asking states to acquire as much of the equipment as they can on their own to supplement the reserve since often the states can acquire the ventilators more expeditiously through local suppliers than they could through federal sources. Washington’s strategic stockpile of equipment is preserved for wartime or for rare pandemics that overwhelm the nation’s hospitals.

With health concerns at the forefront of concern, companies and governments should abandon anti-plastic policies and embrace single-use items. That includes state and local officials postponing their bans on single-use plastic bags and discouraging shoppers from bringing their potentially virus-laden reusable bags into public areas. It would also be beneficial for states and countries to re-examine their policies and, instead of banning these products, figure out a better way to dispose of them or recycle them. Plastic bans at a time of a National Emergency make little practical sense, when plastics are so vital to our national and public health.